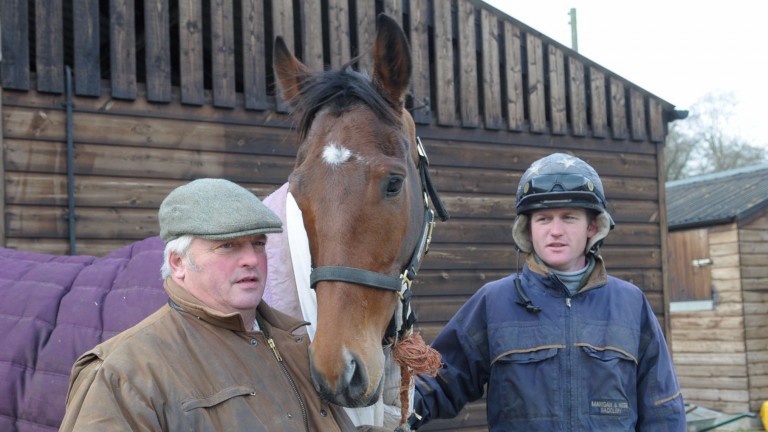 After a string of late absentees and Cheltenham Festival uncertainty, Joe Tizzard delivered a clear and definitive message on Sunday: Cue Card and Native River could not be in better shape for the Timico Cheltenham Gold Cup on Friday.

The Tizzards have not been immune to festival dropouts, with Finian's Oscar joining Thistlecrack on the sidelines for next week. They join a number of horses from other stables that have been forced to miss Cheltenham or change targets last minute as connections jostle to find what they feel are the right opportunities.

However, Native River and Cue Card have had their sights set on the Gold Cup from a long way out, and Tizzard, assistant to his father Colin, was particularly impressed with the performance put by Cue Card on the gallops at home.

"There's not much between them. They've both had beautiful prep runs and they are going into the Gold Cup in their best form, I'm sure of it. All we need now is a bit of luck and what will be will be."

The last horse to win the Cheltenham Gold Cup aged older than ten was What A Myth in 1969, but Tizzard believes the 11-year-old Cue Card is showing no signs of age catching up with him.

Writing in his Coral blog, Tizzard said: "We look at Cue Card every morning and try to think he's an eleven year old, and we can't see one bit of difference between now and how he was four years ago. He is every bit as enthusiastic.

"His form is every bit as good this season as it has been in previous seasons. Probably his best ever run was at Aintree last year. On that form you'd say he'll go very close in the Gold Cup. He doesn't show us any signs at all that he is ageing and he will bring the house down if he wins."

He added: "I'm not biased though and I'm sitting on the fence as I don't think there's a great deal between Native River and Cue Card. If they jump the last upsides that would be fantastic and I'll just be shouting them both on. I'll take a 1-2 either way round."

Cue Card and Native River are the star names among a strong Cheltenham Festival squad this year for the Tizzards, who sent out one winner at the meeting last year: Thistlecrack in the Stayers' Hurdle for owners John and Heather Snook.

Those connections are set to target the Sun Bets-backed race again this year with Thistlecrack's half-brother West Approach, who tackles the race in preference to going for the Albert Bartlett Novices' Hurdle.

Tizzard said: "The owners are very keen on running West Approach in the Stayers' Hurdle and we can't really find a good argument not to in all honesty.

"All season we've been taking him to these decent races to try and teach him to be a racehorse, and he's become one now. In an ideal world we'll sit fourth or fifth and will be given a pretty normal ride and take it from there. Tom Scudamore will ride."

Tizzard added Ryanair Chase-bound Alary had schooled well since his Exeter fall, and that Sizing Codelo was "one of our biggest chances of the week" in the Brown Advisory & Merriebelle Stable Plate.