Richard Forristal on a Classic run virtually behind closed doors 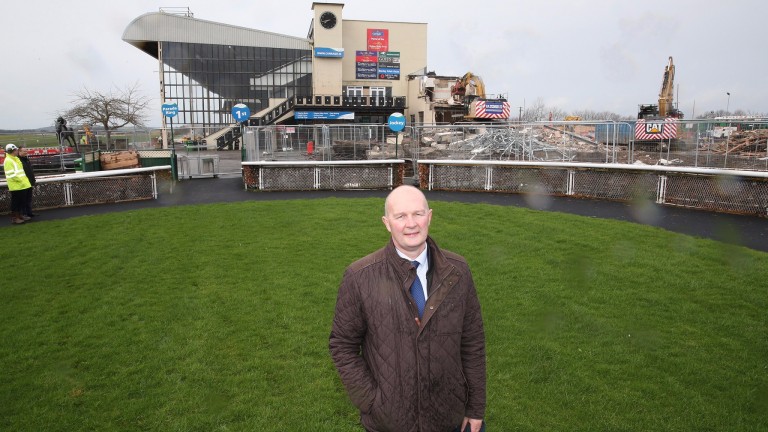 Derek McGrath, who refused to categorically rule out a change of tack
CAROLINE NORRIS
1 of 1
6:05PM, JUL 3 2017

Suffice to say the irony wasn’t lost on many when it emerged that the estimated attendance figure on Dubai Duty Free Irish Derby Day came to just 5,412.

Irish Flat racing is a hard sell at the best of times. When the decision was made to continue racing at the Curragh during its €70 million revamp, the one day that has tended to fall into the best of times category found itself with an attendance cap of 6,000.

Alas, in a pretty apt illustration of just how bizarre it is to in effect be running Irish racing’s premier Classic behind closed doors, it failed to meet even that target. Talk about missing an open goal.

The Curragh can’t catch a break right now, although its CEO Derek McGrath was phlegmatic after Capri's game triumph.

'Those who were here had a great day'

“We budgeted for around 800 AIR card holders, and probably about half of that turned up,” he explained. “We tried to facilitate most of those who turned up on spec as some arrived with extra tickets, and I’m not aware there were many, or even any, who had to be turned away.

"Those who were here had a great day and we've just had a cracking Derby.”

Noel Meade, chairman of the Irish trainers’ association, is among those opposed to racing carrying on at headquarters. The former champion trainer isn’t just indignant that the Curragh isn’t closed, but maintains the prospect of racing there on day two of Irish Champions Weekend in September should be reconsidered.

“I think we're sending out all the wrong signals,” Meade declared, “and I think when this festival is over it should be looked into again as to what they do next.

In response, McGrath stopped short of indicating it is something that would be seriously considered, but neither did he say it would not be.

“We are a business that meets as a board every month and we'll sit down and look at everything,” he said. “We're not handcuffed to anything, but we've got a project that is very ambitious and that required certain decisions to be taken, and one of them was to stay here while we also build.

'It isn't set in concrete'

“If we were to look at reconsidering, that is a board decision, it's not mine to make. At the moment, we're not for changing as we've already reviewed things, but it isn’t set in concrete. If we felt it was the right thing to do we'd look at it, but we're very committed to the programme that's in place.”

From the low base that was the Guineas weekend damp squib, efforts were palpably made to make the raceday experience as comfortable as possible for those lucky enough to have sourced a golden ticket. A mixed bag in terms of weather didn’t help, but you cannot rely on a fine day in this country.

The line of bookmakers that had been running parallel to the track was relocated to form a mini betting ring on the far side of the parade ring. There was a suitably festive vibe, although in contrast to conventional Irish Derby experiences, the ease of movement was palpable.

In the circumstances, the incongruous practice of the Irish Derby victor not returning to the winner’s enclosure served only to enhance the slightly surreal feeling on a day that usually hums.

Bookmaker Seamus Mulvaney was pleased that a more perceptible betting ring has been created, although business was slow.

“This is working better and it creates more of an atmosphere,” he said of the new arrangement. “From our point of view, I think they should probably have been selling tickets here on Guineas weekend, because at least then you know you're getting the right type of client.

"A lot of the people who are here won’t even have a bet, and we could have done with that extra 500 as well."

After the Derby, John Magnier, a shareholder at the Curragh, spoke passionately in favour of the decision to race on at the track.

Finding neutrals to voice such unconditional support isn’t easy, but the well-known TV chef Martin Shanahan is one. Proprietor of the renowned Fishy Fishy eatery in Kinsale, Shanahan is adamant that the official line of short-term pain for long-term gain stands up to scrutiny.

“This [inconvenience] is for two years," Shanahan says, "but hopefully for the next 40 years I'll be able to come here and enjoy the new facilities.

“The other side of it is, it's the one day of the year that you get 20,000 people or whatever, but that's a sure sign that the people who are moaning are the people who don’t come on the other days. Where are those people on the rainy days?”

To a certain extent, that rings true. Still, it is hardly a smart business strategy for an entity partially underpinned by public money.

FIRST PUBLISHED 7:39PM, JUL 1 2017
Champions Weekend hasn’t always been run at the Curragh, and I don’t see why we should muck up two of them