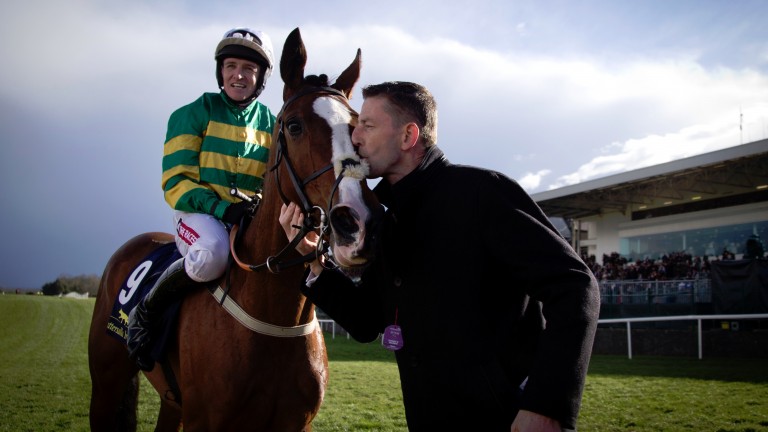 Gavin Cromwell: keen on the chances of Jer's Girl in the OLBG Mares Hurdle at Cheltenham
Patrick McCann
1 of 1
By Brian Sheerin 3:42PM, DEC 19 2016

Gavin Cromwell will decide this week whether to aim star filly Jer's Girl at the Grade 1 Ryanair Hurdle at Leopardstown on December 29 or the Grade 2 Relkeel Hurdle at Cheltenham on January 1.

The dual Grade 1-winning hurdler made her seasonal debut in the Morgiana Hurdle, finishing second to Nichols Canyon at Punchestown last month, and has been impressing Cromwell since then.

“She's come on from Punchestown and I've left her in at Leopardstown, but there’s a chance we could take in the Relkeel Hurdle at Cheltenham instead,” said the trainer.

“They went a proper gallop at Punchestown and Barry [Geraghty] was impressed with her on the day. We'll make a decision on where we go with her closer to the time.”

Cromwell has Leopardstown in mind for Fairyhouse juvenile maiden hurdle winner Prospectus, who scored by 12 lengths on his debut over hurdles last Saturday.

He said: “Prospectus looked good and I’m going to run him at Leopardstown in the Grade 2 Knight Frank Juvenile Hurdle.

“I'd love to have a few weeks between his maiden hurdle win and the Leopardstown race, but unfortunately this is how it has worked out. We'll take our chance though.

“I thought his jumping was good and he won very well and galloped all the way to the line. He looks a nice prospect.”

FIRST PUBLISHED 3:42PM, DEC 19 2016
I have left her in at Leopardstown, but there’s a chance we could take in the Relkeel Hurdle at Cheltenham instead