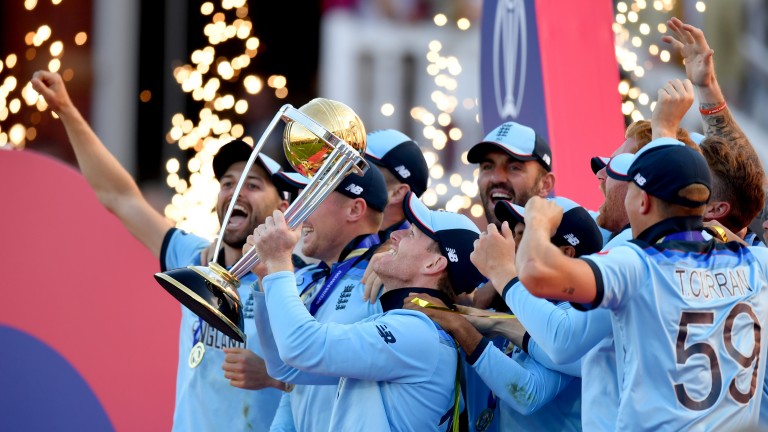 The most dramatic of World Cup finals at Lord’s on Sunday has not only sparked cricket fever across the nation but influenced the reservation of two racehorse names – Champagnesuperover and Super Over.

Champagnesuperover was the brainchild of Max McNeill’s racing manager Iain Turner, who was quick on the draw to reserve the name on the BHA website in the midst of the dramatic one-over shootout that followed the tie between England and New Zealand.

McNeill, speaking from Paris, said: "My racing manager Iain Turner has to take all the credit for the name. When New Zealand were batting for the second time he said, 'If we win we're going to call our next horse Champagnesuperover' and I thought, 'Iain you’re a genius'!

"Iain reserved the name when Jofra Archer was bowling the Super Over, while on the phone telling me what was happening in the game. I had been watching it on my phone but we got to the last over and the bloody thing stopped working!"

Champagnesuperover will be trained by @O_J_murphy91. He’s a 4yo by Jeremy and will hopefully be running in the autumn. Part owned with @PaddyBryceland and @scottbry pic.twitter.com/cvu9MDeCJ9

The four-year-old son of Jeremy is in training with Olly Murphy and well regarded by connections.

McNeill said: "I own him with a couple of mates – Paddy and Scott Bryceland – who agreed to the name so it's done – signed, sealed and delivered.

"He might start off in a bumper but he's a hurdler for the future and we think quite a lot of him. Let's hope he's as good as his name!"

There is also a link to this week's Open Championship in McNeill’s recent racehorse naming with a four-year-old by Shantou, trained by Paul Nicholls, registered as Threeunderthrufive.

McNeill said: "The last time the Open was played at Royal Portrush my dad Ted went three under after five holes so we have marked the occasion.

"The first hole at Portrush is named Hughies after my grandfather and is who my brother is named after, so it's a special place to our family."

Owner-breeder Jonny Allison has reserved the name Super Over and has a year to decide on which youngster will take the World Cup-inspired title.

Allison said: "I reserved Super Over straight after England batted in the Super Over but to be honest I probably would have been a seller after the first couple of balls for New Zealand.

"I thought it was a fun thing to do. I wouldn't be a massive cricket fan – racing has always been my number one interest – but you can't not watch something like that.

"It puts pressure on the horse now and I'm sure there won't be a shortage of trainers to find me one to do the name justice!

"I've got a Sepoy colt who was bred in Yorkshire so he's got cricket in his veins. He's a candidate but there's no rush and I've reserved the name for a year."

FIRST PUBLISHED 3:47PM, JUL 15 2019
Iain reserved the name when Jofra Archer was bowling the Super Over