The day Cracksman announced his arrival in the Derby Trial 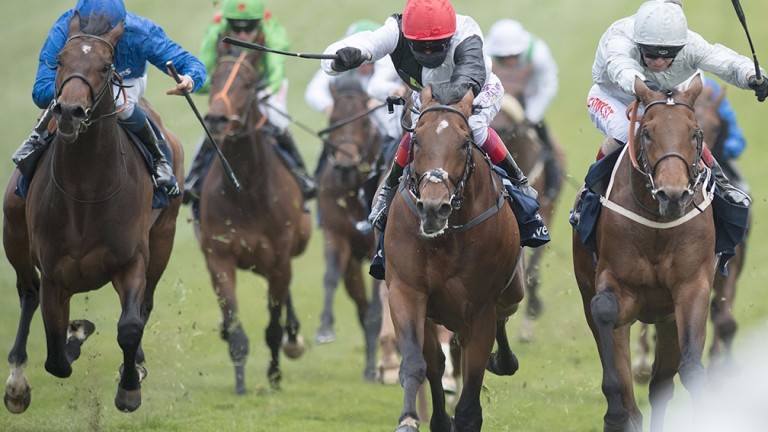 Cracksman fights out the finish to the Investec Derby Trial with Permian (far right)
Edward Whitaker (racingpost.com/photos)
1 of 1
By Andrew Dietz 3:26PM, NOV 22 2019

John Gosden will issue Cracksman with another Investec Derby audition after the highly touted Frankel colt was forced to pull out all the stops to run down Permian at Epsom.

It is 78 years since the last winner of the track's trial went on to claim glory in the big race itself, but the majority of bookmakers made Cracksman Britain's leading contender at this early stage of the season after cutting him into 10-1, although Coral and Ladbrokes stood firm with their 12-1 quotes.

Carrying the same Anthony Oppenheimer silks as 2015 Derby hero Golden Horn, Cracksman was short of room at the three-furlong pole but after being manoeuvred out by Frankie Dettori, he finished strongly to collar the race-fit runner-up on the line in a time nearly six seconds slower than standard.

"They went no pace and he got well and truly shut in and couldn't get out, and I'm delighted with how he picked up," said Gosden, who combined with Dettori to win the race for the third year in a row.

"I did say to the owner beforehand that he's pretty laid back and very inexperienced, and I said we could get done for experience round here by a horse like the second, which nearly happened.

"With a bit more pace he would have won easier, but I like the fact that he finished strong. They talk about Frankels being over exuberant, but this horse is so laid back."

Weighing up the possible options for the unbeaten Cracksman over the next six weeks, Gosden, who has carried all before him in the Classic trials so far, added: "He'll have another run, at Chester or York, and will come on a bundle for the race."

Dettori, who had his face covered against the unseasonably cold weather, also expects major improvement from a horse having a first outing since winning a backend Newmarket maiden on his only start as a two-year-old.

"He's been very green and lazy at home and we got him here for that reason – to educate him," said the jockey.

"He jumped okay and got a nice tow, but they slowed it right up and it was a three-furlong sprint, which did not suit him, but at least he learned how to quicken down the hill.

"It was a very good educational run. He needs every yard of this trip and the extra quarter mile will not be a problem."

FIRST PUBLISHED 7:00AM, APR 25 2018
They went no pace and he got well and truly shut in and couldn't get out, and I'm delighted with how he picked up