The second, third and fourth in last year's Derby take each other on, but it would be a surprise – and a relief to bookmakers – if they finished in the same order again.

Cracksman was third, a place behind Cliffs Of Moher and one in front of Eminent, but has developed into a better horse than his Epsom opponents and is seeking to win his sixth race, and fourth Group 1, in a row.

That journey has not been without incident. At Epsom last month he banged his head when leaving the stalls in the Coronation Cup and, having to make ground up on Salouen at a course where he is not at his best, managed to get past just a few strides before the line. 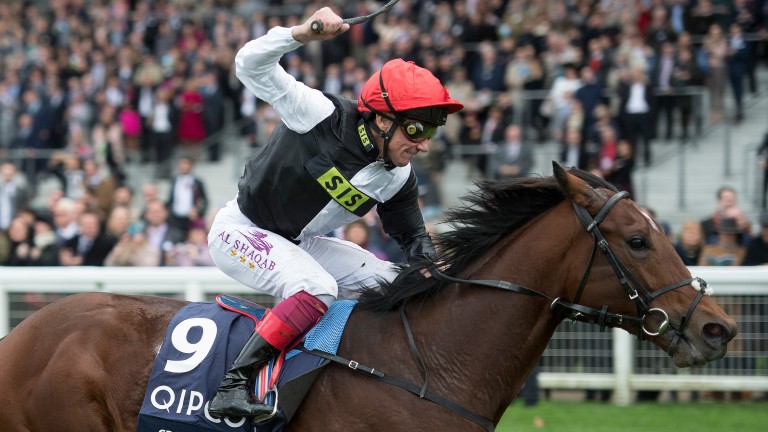 Cracksman was initially pushed out to as big as 3-1 for his Royal Ascot assignment, but instant support meant he's back into odds-on for the Prince of Wales's and is considered by bookmakers to be the worst result of the meeting if he wins under Frankie Dettori.

That market confidence is largely built on the most impressive performance of his career in the Champion Stakes at Ascot in October, over the same distance as this test – form that has earned Sir Anthony Oppenheimer’s four-year-old status as a top-priced 3-1 chance for the Qatar Prix de l’Arc de Triomphe.

Gosden, who won the race with The Fugue in 2014 and before that enjoyed success twice with Muhtarram, said: “He's back at Ascot, which is a bonus for him as he's done well there in the past.

"Together with the King George, this is one of his main summer objectives and he's been in good shape since the Coronation Cup, where things didn't go entirely to plan.

“He's come back from that well and won't mind the ground as it was on the quick side when he won the Prix Ganay even though they called it good."

Gosden added: “As he's shown in the past, he's versatile as regards tactics and can make the running or drop in but I'll leave that to the jockey.

"One thing we don't have to worry about is the draw as there are only seven runners – there shouldn't be any excuses.”

Pros: Quite comfortably the classiest horse in the race and loves Ascot

Cons: His Coronation Cup win was his least impressive success yet

A comfortable win in the Brigadier Gerard at Sandown last month underlined the reliability of Poet’s Word, who has the talent to expose any flaws in Cracksman.

Seven lengths separated the pair in the Champion Stakes at Ascot in October, but that was on soft ground and Bruce Raymond, racing manager to owner Saeed Suhail, is hopeful a firmer surface will be more to the liking of the Sir Michael Stoute-trained five-year-old than the favourite.

Raymond said: “He’s got excellent prospects and I wouldn’t be surprised if we turned the favourite over. We’re not going there to run second. 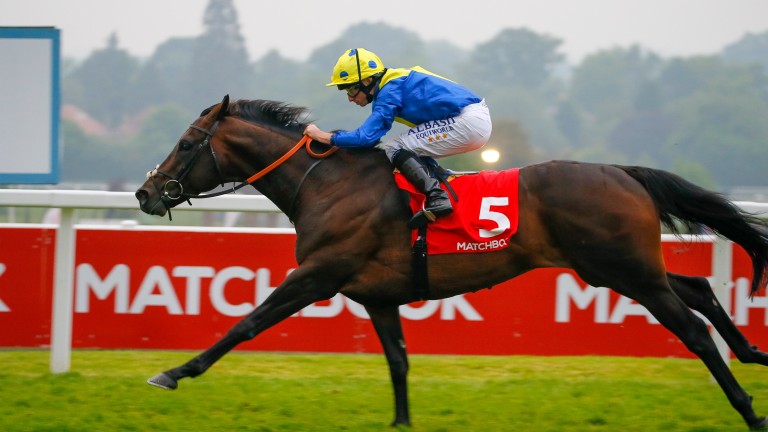 Poet's Word: the main market rival to Cracksman
Mark Cranham
“Hopefully the ground will suit him more than Cracksman. The favourite may have had a hard race at Epsom that could've taken the edge off him. Hopefully we can find a chink in his armour."

James Doyle takes over in the saddle from Ryan Moore, who rides Cliffs Of Moher.

The pair finished second to Decorated Knight in the Irish Champion Stakes in September, the same spot Poet’s Word occupied in the Sheema Classic behind Hawkbill, another of his rivals here, in March.

Raymond said: “James Doyle suits him and I can see the pair of them battling away up the straight.

"Of the others, I would be surprised if Hawkbill beat us on home ground. I think we'll finish in the first two.”

Pros: Ultra-consistent, has got better with each season and is placed to take advantage if Cracksman fails to fire

Cons: Has not won a Group 1 in several tries and needs to find more on form

Appleby: Hawkbill can spark back to life

First-time blinkers and back at 1m2f look to be the key factors to try and help Hawkbill return to his best after a below-par fifth behind Cracksman in the Coronation Cup at Epsom.

That was a disappointment after his Sheema Classic win in March, but trainer Charlie Appleby said: “You can put a line through that. He was a bit fresh and ran free enough and we’re switching his cheekpieces for blinkers.

"He’s been around a while now and we thought we'd change the scenery for him a bit.

“We’ll go out there and ride our usual positive race. Cracksman will be hard to beat and I'd be pleased to finish in the first three."

He added: "He’s got course-and-distance form from winning the Tercentenary a couple of years ago, so he ticks all the right boxes. Some forget that he won the Coral-Eclipse over a mile and a quarter as a three-year-old.”

Eminent has promised plenty and trainer Martyn Meade believes he still has the tools the deliver, despite a bitterly disappointing effort at Chester last month.

A Group 2 winner at Deauville and third behind Decorated Knight and Poet’s Word in the Irish Champion Stakes, the son of Frankel was sent off at 8-13 for his return from an eight-month break in the Huxley Stakes but trailed in last.

Meade said: “He’d been off the track for a while and maybe Chester didn’t suit, but nothing came to light after the race and I think we have to put that behind us.

“Since then he’s been firing on all cylinders and I couldn’t have asked for him to work any better. He's strengthened up and is a massive beast of a horse."

Meade added: “I can’t be bullish because of Chester but if he'd won – which he should've done – then I'd be over the moon with him. If he can reproduce the run from Deauville last August, he'd take some beating.

"We have to play to his strengths and let him use his stride, in which case he'll take a lot of catching. This has always been his target.”

For a moment or two he looked like winning the Derby before Wings Of Eagles swooped past, and nothing has matched that brief high for Cliffs Of Moher.

Little particularly went right for the remainder of last season, but victory in the Group 2 Mooresbridge Stakes at Naas last month did point to better things, although he was then beaten by stablemate Lancaster Bomber – an absentee here due to a foot problem – when stepped back up in class in the Tattersalls Gold Cup. 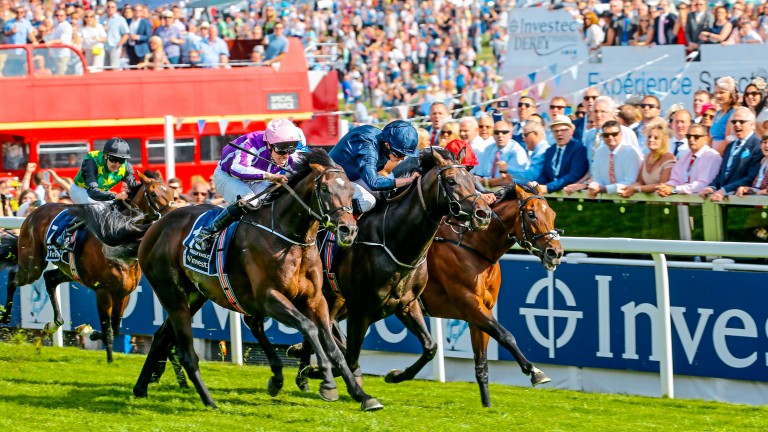 Unlike Aidan O'Brien’s three winners of this event, Duke Of Marmalade (2008), So You Think (2012) and Highland Reel a year ago, Cliffs Of Moher is still seeking a first Group 1 success.

O'Brien said: "Cliffs of Moher came out of his last run well. We're happy with him and fast ground and 1m2f should suit him well."

Desert forecast to be in the money

Desert Encounter has kept good company without looking like winning, and trainer David Simcock is expecting another honest performance.

A third in the Coral-Eclipse and fifth behind Cracksman in the Champion Stakes were the highlights last season, before a third to Poet’s Word in the Brigadier Gerard last month. 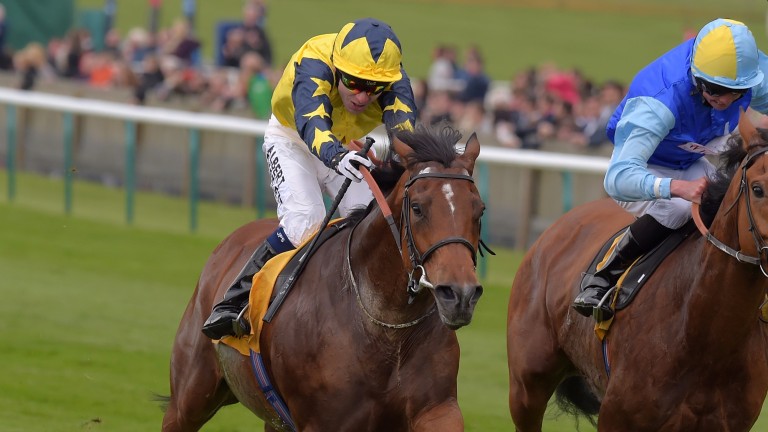 "His third under a penalty at Sandown was a good stepping stone. Conditions will be no problem at all.”

Royal Julius has the right name for the meeting, even if his form gives him plenty to find with most of his rivals.

Trainer Jerome Reynier, however, thinks his winner of a Group 2 in Italy last time out is an improved horse who will enjoy Ascot.

He said: “The ground was heavy for his comeback in the Prix d’Harcourt and I think he'd have beaten Air Pilot on better ground. It showed to me he'd gone up a level over the winter. In Italy he picked up really well and broke the track record.

"The other advantage is that he's completely unfazed by noise or crowds and should handle the occasion very well.”

FIRST PUBLISHED 6:00PM, JUN 19 2018
He won't mind the ground as it was on the quick side when he won the Prix Ganay, even though they called it good

Dettori adds to strong hand as he guns for third straight Royal Ascot crown More Ascot heroics? Hollie Doyle hoping Trueshan and Glen Shiel can star again Frankie Dettori in demand as Royal Ascot countdown continues A top on-course bookie on the horses he's out to get on day one at Royal Ascot Royal Ascot special: 'She's my best - and only - bet in a two-year-old race' Tracks set for more pain after June 21 with likely delay on restrictions easing