Cracksman and Ulysses still on course for Champions Day clash 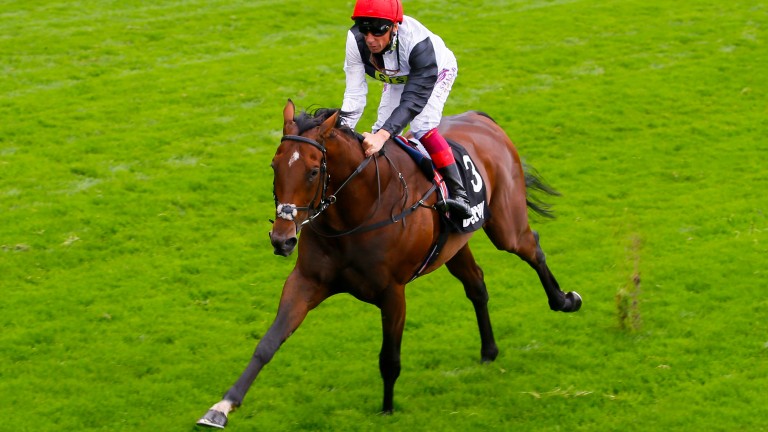 Cracksman: the impressive winner of the Great Voltigeur heads for the Champion Stakes
Mark Cranham
1 of 1
By Tony McFadden UPDATED 6:58PM, OCT 16 2017

Barney Roy and Brametot could join Cracksman in forming a strong three-year-old challenge, but dual Classic heroine Winter will not be running on Champions Day.

Aidan O'Brien, who is one behind Bobby Frankel's record for top-level winners in a year, has eight possible runners in the ten-furlong showpiece, including Derby runner-up Cliffs Of Moher and Churchill, although the dual 2,000 Guineas winner also has the Queen Elizabeth II Stakes as an option.

'Deserves a step up in class'

Should Churchill run in the QEII he could clash with last year's runner-up Ribchester and the progressive Beat The Bank, who feature among 16 confirmations for the prestigious mile contest.

Beat The Bank has won five of his six career starts and arrives on the back of an impressive success in the Group 2 Joel Stakes, which has encouraged connections to take their chance at the highest level.

Trainer Andrew Balding, who could also be represented by surprise Sussex Stakes winner Here Comes When, said: "Beat The Bank has done very well for us this year. He’s been very progressive, seems to handle any type of ground and the way he won the Joel Stakes suggests he might have a chance at the highest level. He won it emphatically and deserves a step up in class. Only time will tell whether he is up to it, but we hope so.

“A lot depends on the weather forecast for Here Comes When, who is obviously a much better horse when there is a lot of rain around. He’s in great form and is a horse who historically has goes very well fresh. We are very happy not having run since Goodwood.”

The first Group 1 on the card, the Qipco British Champions Sprint Stakes, features a mouthwatering rematch between Harry Angel and Caravaggio.

Caravaggio came out on top when the pair met in the Commonwealth Cup, but many will be expecting Harry Angel to prevail this time following Group 1 wins in the July Cup and Sprint Cup.

Harry Angel's trainer Clive Cox said: “He was a baby to begin with, fractious in the stalls and wanted to get on with life. I’m delighted that with maturity – physically and mentally – he has become the finished article.

“I’m very proud to have been involved in his career; he’s made a huge difference to our lives the way he’s performed and the success he’s achieved. It’s a mighty hot race, as it always is and you’d expect. It’s a great finale to the turf season.”

The meeting kicks off with the Qipco British Champions Long Distance Cup and could feature another Royal Ascot rematch as Big Orange and Order Of St George, who fought out the memorable finish to the Gold Cup, are among 19 confirmations.

Gold Cup hero Big Orange was a creditable second in the Goodwood Cup on his most recent start and he could reoppose Stradivarius and Desert Skyline, the pair he split on that occasion.

The Queen's Dartmouth has been supplemented for the 2m Group 2 race.

The market principals, including the likes of Journey and Bateel, have stood their ground for the Group 1 Fillies & Mares Stakes, in which Alyssa has been supplemented to bring the remaining contenders to 15. A maximum field of 20 looks assured for the concluding £250,000 Balmoral Handicap.

Surf & Turf: Ascot on top in the battle of the hashtags

FIRST PUBLISHED 1:25PM, OCT 16 2017
He’s been very progressive, seems to handle any type of ground and the way he won the Joel Stakes suggests he might have a chance at the highest level

'Hopefully he's not finished yet' - Rohaan continues his remarkable rise Doyle Force: Creative rider off the mark for the week as Appleby bags a 1-2 What we learned from day four of Royal Ascot A day when two big decisions had to be made - officials at Ascot got both right Did the stewards get it right in the Commonwealth Cup? Experts have their say I've seen no sign of a Lance Armstrong - but the thought makes me feel sick