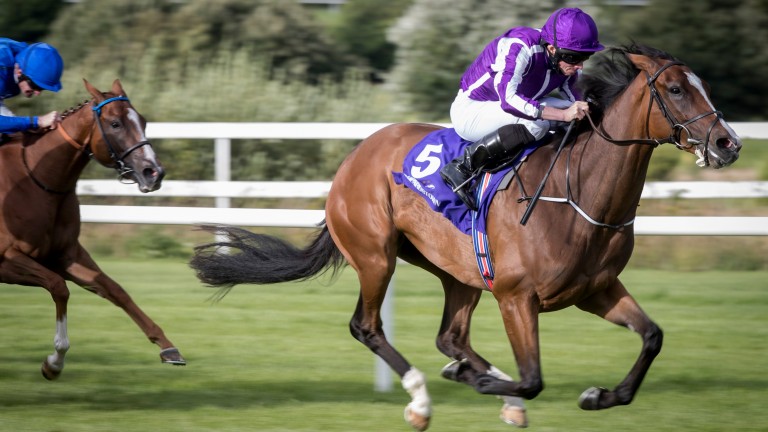 Happily stretches to a five-length win in the Group 3 Silver Flash Stakes at Leopardstown
Patrick McCann
1 of 1
By Tony O'Hehir UPDATED 3:26PM, AUG 20 2017

An intriguing clash of stablemates Happily and September in the Group 2 Breast Cancer Research Debutante Stakes (3.20) is the standout dish on Sunday’s tasty Curragh card.

Described recently by jockey Ryan Moore as the two-year old filly who has impressed him most this season, Happily is two from three and was an impressive five-length winner of the Group 3 Silver Flash Stakes over this seven-furlong trip at Leopardstown last month.

September, the mount of Seamie Heffernan, followed up a decisive debut win at Leopardstown by landing the Chesham Stakes at Royal Ascot.

Their trainer Aidan O’Brien, who is also represented by Cork maiden winner Magical, said: “The ground won't be ideal for any of them and hopefully it won't get too testing.

"Happily won very nicely at Leopardstown. She hasn't done a lot since but we're happy with her.

"September had a break after Royal Ascot and is ready to start back. She's in good form."

He added: "Magical won her maiden over a mile and is down in trip. The experience should do her good."

O’Brien has won the race – one of four Group contests on the card – 11 times already and will be seeking a third consecutive win, having hit the target with Ballydoyle in 2015 and Rhododendron a year ago.

Black Sails, Dawn Delivers and Shekiba are the other winners in the eight-runner line-up.

The Group 2 Galileo Futurity Stakes (2.10) has been won by several colts who went on to even better things. Among them were Giant’s Causeway, Hawk Wing, Teofilo, New Approach, Gleneagles and, most recently, Churchill.

Many of the previous winners of this contest went on to land the Group 1 National Stakes in their juvenile season, and of the six in the line-up here only Coat Of Arms, one of three runners for O’Brien, is not entered for that race next month.

Theobald, who won over a mile on his debut, finished second to The Pentagon in the Tyros Stakes on his most recent start and the Jim Bolger-trained colt is the highest rated in the field on official figures.

The Ger Lyons-trained Camelback is on a hat-trick, while O'Brien is expecting an improved performance from Rostropovich, who is fitted with a tongue tie having finished last of three behind Camelback at Naas on his most recent start.

O'Brien said: "Rostropovich was a bit disappointing at Naas and we're expecting him to improve on that run.

"We probably made too much use of Berkeley Square at Leopardstown last time and we think he's capable of better, while Coat Of Arms was caught late on by another of ours at Leopardstown and takes his chance." 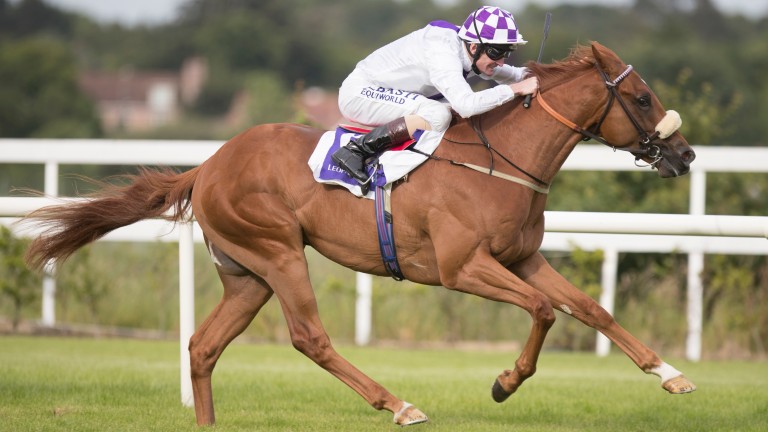 Dermot Weld will be hoping Shamreen can build on last year's progressive form when she faces four rivals in the Group 3 Qatar Airways Royal Whip Stakes (3.55), the oldest continuously run race in Ireland having been inaugurated in 1821.

Staged over different distances throughout its long history, the race is now firmly established as a 1m2f test.

Shamreen, who will be having only her second start of the season, is blinkered for the first time. She was a three-time winner last season, when she achieved her biggest success in the Group 2 Blandford Stakes over course and trip.

Weld said of the Aga Khan's four-year-old: “Shamreen is very well. She appreciates plenty of ease, so the rain we've had is welcome, and I expect her to run a very good race."

Newmarket trainer Roger Varian is represented by Central Square. Fitted with first-time cheekpieces, Colin Keane’s mount will be attempting to follow Maputo as a British-trained winner of the race – he was on target for Mark Johnston four years ago.

Varian said: "Central Square ran a good race in Group 2 company at York and this looks easier on paper. He won't mind the easy ground and the galloping track is a positive. Colin Keane is having a stellar year and the horse should acquit himself with credit."

True Blue Moon, twice a winner over the trip and sixth in the Norfolk Stakes at Royal Ascot, reverts to five furlongs in the Group 3 Qatar Racing and Equestrian Club Curragh Stakes (2.45), having failed to make the frame in the Railway Stakes over six furlongs last month.

His trainer Joseph O'Brien said: "True Blue Moon is in good form and has been pleasing us at home. We're hoping for a good run, although we don't want to see much more rain."

Similar ground concerns were expressed by O'Brien's father Aidan regarding Declarationofpeace, who won his maiden over the trip before finishing last when favourite for the Windsor Castle.

The colt is blinkered for the first time and O'Brien said: "He had a hold-up between his maiden win and Ascot but ran a nice race in the Phoenix Stakes last time.

"He's a fast horse but wouldn't want bad ground and if it gets very testing he wouldn't be certain to run."

Sirici, a three-time winner over the trip, including at Listed level last time, represents Fozzy Stack, while the Johnny Murtagh-trained Wolfofbaggotstreet has been gelded since his last run.

FIRST PUBLISHED 6:05PM, AUG 19 2017
The ground won't be ideal for any of them and hopefully it won't get too testing