Course specialist Chiclet back to defend her crown for Collins 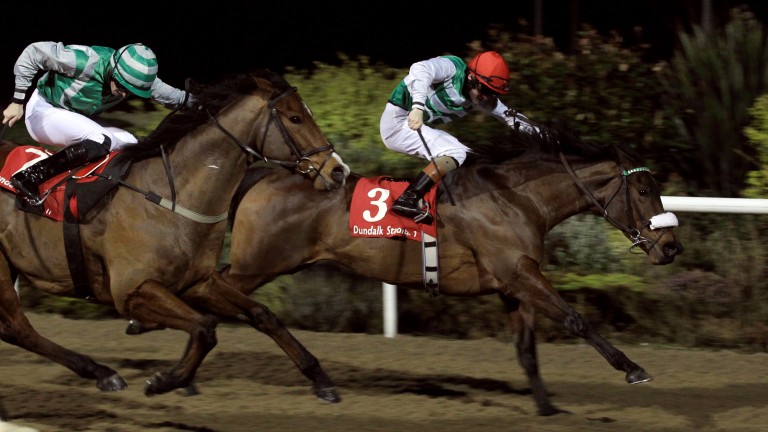 Chiclet: back to try and repeat last year's success in the Racing Post Handicap at Dundalk on Wednesday
Patrick McCann
1 of 1
By David Jennings 4:14PM, JUL 12 2017

Chiclet is back at her happiest hunting ground to defend the crown she claimed so emphatically 12 months ago.

On that occasion, the daughter of Dandy Man showed blistering speed to win the early battle for supremacy and she never saw another rival on the way to a two-and-three-quarter-length victory over Primo Uomo. It was impressive stuff.

That silky smooth success was achieved off a mark of 90 so she has a 6lb higher mark to contend with here. She has also been off the track for 181 days following a nasty stalls incident that almost ended her racing career. Tracey Collins has been patient and we will find out if Chiclet retains all her old zip.

Chiclet is a course special at Dundalk with five of her six wins coming there, but so too is Geological. The five-year-old, who cost only 800gns, is making his 22nd visit to Ireland's all-weather track.

Geological has won three of those outings and arrives here with a career-high mark of 99 having been rated as low as 68 in the winter of 2016. All his wins have come from six furlongs to a mile so the minimum trip is a new venture by trainer Damian English.

Pat Smullen has been on Chiclet for four of her six career victories and the champion jockey is reunited with the speedy six-year-old.

Damian English, trainer of Geological
He's in great order. He's very sharp at the moment so that's why we've dropped him down to five furlongs for this. He's deadly around Dundalk. It will be straight on to Galway with him after this.

Tracey Collins, trainer of Chiclet
She got badly hurt in the stalls last time and it's taken her a long time to recover. At one stage we weren't sure whether we'd get her back at all. We've given her plenty of time and she seems in good form but I just hope she doesn't get any flashbacks of what happens when she enters the stalls. She'd never had problems before the incident.

Natalia Lupini, trainer of Abstraction
He's in great heart and the handicapper has given him a chance this year. He ran really well at Cork but needed the run there as it was his first race for about nine months. This race had been on my mind for a while and I'd like to think he's got a great chance.

Gerard O'Leary, trainer of Strategic Force
He's fit and well and has a lovely weight. The one negative is the draw as he's out in stall seven of eight. There is a lot of speed in there and hopefully he'll be the one coming home late and picking up the pieces.

FIRST PUBLISHED 6:00PM, JUL 11 2017
We were not sure whether we would get her back at all. We've given her plenty of time and she seems in good form