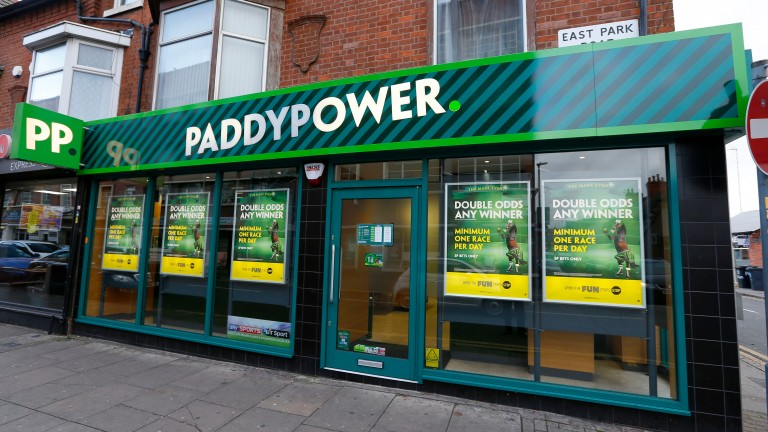 Paddy Power: will be closing all British shops until the end of April
1 of 1
By Peter Scargill and Bill Barber UPDATED 8:27PM, MAR 20 2020

No betting shops will be open in Britain for the foreseeable future after being included as part of the government’s shutdown of social and leisure life as it attempts to slow the spread of coronavirus.

Betting shops were included alongside the likes of cafes, pubs, museums, leisure centres and cinemas that have been asked not to reopen on Saturday after expert advice outlined “more needs to be done in order to tackle the spread of infection”, which has claimed 184 lives in the United Kingdom.

The closures, which gambling firms privately fear could last for up to two months, were announced alongside a fresh range of measures from chancellor Rishi Sunak, including, for the first time by a UK government, an offer to pay 80 per cent of wages for employees at any business who would otherwise have been laid off, up to £2,500 a month.

As well as stepping in to help pay the wages of staff, business VAT payments were pushed back until June and access to the Universal Credit benefit was opened up to the self-employed with the lifting of the minimum income floor, meaning the self-employed will be paid the same as someone on Statutory Sick Pay.

Sunak, whose Richmond constituency covers Middleham, said: “This is unprecedented in the history of the British state. Combined with the previous announcement, our planned response is the most comprehensive in the world.

“We need a collective national effort with a role for everyone to play. It’s on all of us.”

The actions to protect businesses and employees were welcomed by the BHA, which has been working alongside representative industry bodies in racing on a financial submission to the government for aid and help after cancelling all racing in Britain until at least the end of April because of the Covid-19 pandemic.

In a statement following the announcement, the BHA said: “The details that have been given so far will be analysed by senior executives, using the most recent information on the commercial revenues and employment generated by the racing industry.

“A wide-ranging submission to government outlining the impact of the shutdown on racing and proposing areas for potential help is being adapted to respond to the chancellor’s announcement.”

Racing professionals also expressed their satisfaction with Sunak’s intervention to help businesses and employees. Group 1-winning trainer Michael Dods wrote on Twitter: “Still digesting details of the chancellor's jobs retention plan but the government needed to act in a big way and, to be fair, that's what it's done. Hopefully, it could make all the difference to a lot of businesses, including those connected to the racing industry.”

The betting industry has been hugely impacted by the Covid-19 shutdown of sport, with shares in the likes of GVC Holdings, parent company of Ladbrokes Coral, William Hill and Flutter Entertainment, the group which contains Paddy Power and Betfair, falling significantly over the past two weeks.

In addition, betting shops were classed as not being eligible for the business rates relief Sunak had unveiled earlier in the week, something Michael Dugher, chief executive of the Betting and Gaming Council, believes should now be reconsidered due to the closures.

Dugher, a former Labour MP, wrote on Twitter: "Betting shops must close, rightly, because they are 'leisure' businesses, like clubs etc. Yet HMT [HM Treasury] tell us that unlike all the other businesses on the list of those who must close, betting shops, casinos and bingo halls can’t access help with business rates. Time to rethink that?"

Prior to the government announcement, Paddy Power were the first layer to confirm they would be closing all their 350 betting shops in Britain from Friday night until the end of April, a move that mirrored the decision to close operations in Ireland until March 29.

A statement from Flutter Entertainment, the parent company of Paddy Power, on Friday, said: “In line with the spirit and letter of the latest social distancing guidelines from the government in the UK, we are closing all UK Paddy Power betting shops from tonight until the end of April, or beyond in line with government guidelines, to protect our retail employees and customers.

“There is nothing more important than the safety and wellbeing of our colleagues and the public during this pandemic.”

A statement from parent company GVC Holdings on Friday night read: “In line with this afternoon’s government announcement we will be temporarily shutting all our Ladbrokes Coral shops in the UK from the close of business tonight.

“It is very welcome to now have clarity and reassurance from the government on this serious matter, as the safety and wellbeing of our colleagues and customers is of paramount importance.”

Stay informed about the coronavirus and racing

Nick Rust: why we took the decision to shut down British racing

Members' Club: No football, so it's time to follow those who always self-isolate - the gamers