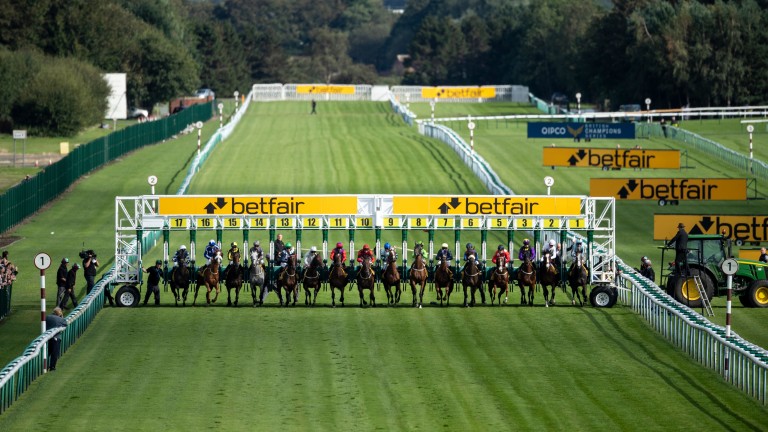 British racing: a fixture list for June, July and August was published by the BHA on May 22
Edward Whitaker (racingpost.com/photos)
1 of 1
By Jonathan Harding UPDATED 2:51PM, JUN 10 2020

Since the cessation of racing in Britain (March 18) and Ireland (March 24) due to the coronavirus pandemic, their respective racing authorities have devised detailed behind-closed-doors resumption plans.

The BHA is working towards restarting on June 1, the earliest point at which the UK government will consider a return of professional sport in line with the prime minister's phased plan to exit lockdown.

In Ireland, the sport was pencilled in to return on June 29 but that date was brought forward to June 8 by Taoiseach Leo Varadkar, who stressed the importance of the industry to the economy. 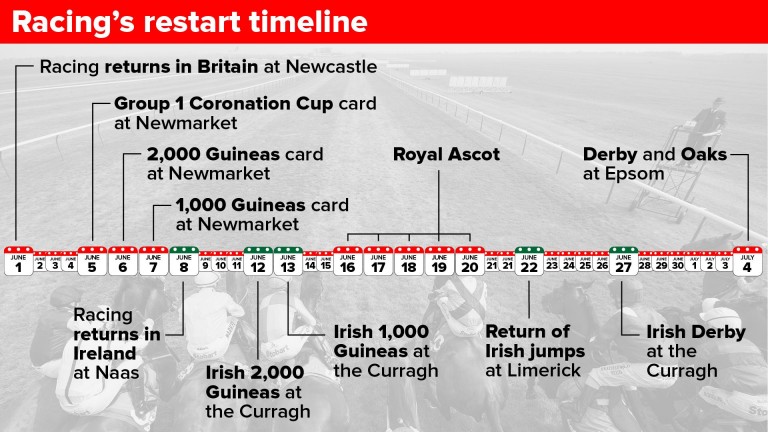 The BHA and Horse Racing Ireland (HRI) have outlined provisional schedules for racing's return in June and revised their calendars of Pattern races, including the first Classics of the season.

After months of waiting, racing could finally be allowed to return in Britain. The action is scheduled to kick off on the all-weather at Newcastle, with an eight-race card in the afternoon.

Another meeting will take place at Newcastle the following afternoon with two 5f maidens, the first juvenile races in the revised calendar.

With an emphasis on providing opportunities regionally, there will also be an eight-race card on the all-weather at Kempton.

The BHA published a blockbuster schedule of Pattern races on May 13 and the first two, the Group 3 Classic Trial (2.45) and the Listed EBF Snowdrop Fillies' Stakes (3.45), will take place at Kempton. 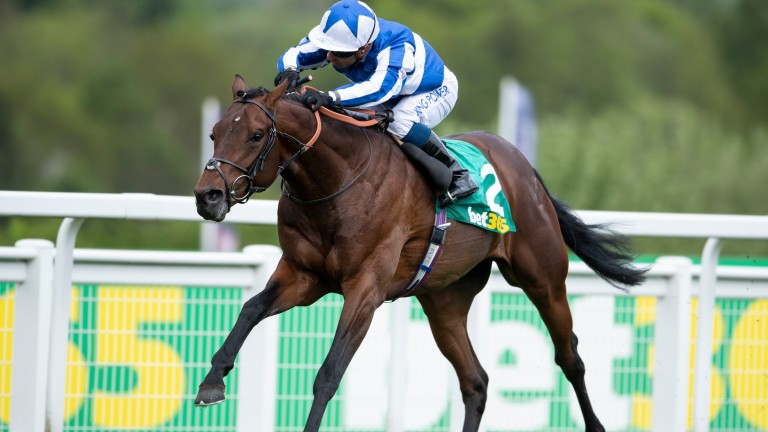 Yarmouth will stage the first turf meeting since the suspension of racing with a nine-race card, including four races for older horses.

Newcastle is set to play host to the Group 3 Pavilion Stakes (3.20), which is ordinarily run at Ascot and was won last year by Calyx.

We could also witness the return of racing at Newmarket, where the first four races on the afternoon card are reserved for juveniles.

The Pattern races will start to come thick and fast with Newmarket beginning a run of three days with the first Group 1 in the revised schedule, the Coronation Cup (3.35), which was moved from Epsom.

The track is also set to stage the Group 3 Abernant Stakes (2.25) and the Listed Paradise Stakes (3.00), ordinarily run at Ascot.

Lingfield could be back with a bang and is down to run its Listed Oaks and Derby Trials (2.40/3.15), won last year by the two winners of the Epsom Classics, Anthony Van Dyck and Anapurna.

Trainer Charlie Appleby issued a positive update on 2,000 Guineas favourite Pinatubo, who he said had trained on well from two. 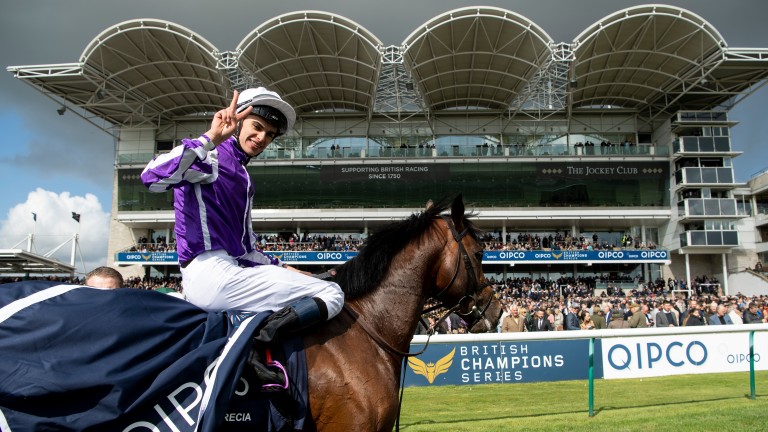 There is also afternoon all-weather action from Newcastle, which hosts the Group 3 Sagaro Stakes (3.15), and Lingfield.

The top-class action continues at Newmarket with the Qipco 1,000 Guineas (3.35) and two Listed contests: the Buckhounds Stakes (1.50) and the EBF Pretty Polly Fillies' Stakes (3.00).

Haydock will put on its first meeting since the return of racing and it will include the Group 3 Brigadier Gerard Stakes, relocated from Sandown.

Racing is set to resume in Ireland with a solitary meeting at Naas and there is a full complement of meetings in Britain at Haydock, Lingfield and Chelmsford, which returns to the fray.

Haydock once again hosts racing in the afternoon on Tuesday before evening entertainment courtesy of Chelmsford and Wolverhampton.

Racing is back at the popular Yorkshire venue of Pontefract while evening action comes from Kempton and Yarmouth.

Unlike Britain, Ireland will initially host one meeting a day and on the third day Navan will stage the Listed Heritage and Salsabil Stakes.

Racing in Yorkshire continues with Beverley back in action with an afternoon card, before evening turf fixtures at Bath and Yarmouth.

For the first three weeks, Irish racing will be restricted to nine tracks to minimise travel and on the first Friday Gowran Park will stage racing.

Action returns at the Curragh with the first Irish Classic of the season, the Tattersalls Irish 2,000 Guineas, won last year by Phoenix Of Spain. The track will also run the Group 2 Ridgewood Pearl Stakes.

In Britain, racing returns to Newbury for the first time since the lockdown with an evening fixture. The afternoon's action comes from the all-weather at Wolverhampton and Kempton. 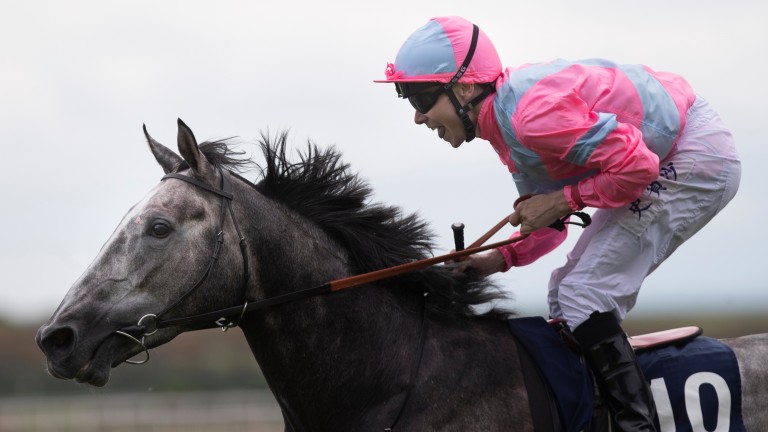 Phoenix Of Spain: winner of the Irish 2,000 Guineas
Patrick McCann

The Irish 1,000 Guineas takes centre stage at the Curragh along with the Group 2 Mooresbridge Stakes and a pair of Group 3s.

The pick of the action in Britain comes from Newbury with the Group 3 Diomed Stakes, moved from Epsom, the highlight. Saturday's card also features the Listed Maggie Dickson and the Abingdon EBF Stakes.

Sandown is also in action, with the Scurry Stakes the key race. Doncaster and Leicester also stage racing.

Three Group 1 tracks host racing on Sunday in Britain; Doncaster, Goodwood and Newmarket are all in action. Goodwood hosts the Cocked Hat and Cathedral Stakes while Doncaster stages the Achilles Stakes and Grand Cup.

For the first time since the resumption of racing there will be two meetings in Ireland with Fairyhouse and Roscommon joining the fray.

Goodwood stages its second day of racing to start the week, supported by an afternooon meeting at Pontefract – which included the Listed Pontefract Castle Stakes – and an evening meeting yet to be confirmed.

The first day of Royal Ascot is set to take place behind closed doors, and this year's meeting contains six new races.

A seven-race card starts the meeting, with the Buckingham Palace Handicap, scrapped in 2015 when the Commonwealth Cup was introduced, beginning proceedings.

An action-packed day includes the Group 1 Queen Anne and King's Stand Stakes, while the Ribblesdale, King Edward VII and Duke of Cambridge Stakes add to a ferociously competitive start. The Ascot Stakes rounds off the card.

Thirsk stages racing for the first time since the shutdown, while in the evening Windsor is in action.

After a day off, racing returns in Ireland alongside Royal Ascot with the Listed Martin Molony Stakes, won last year by Dadoozdart, at Limerick and another meeting at Gowran Park.

Wednesday at Ascot will prove a punting puzzle with four ultra-competitive handicaps and the tricky Windsor Castle Stakes over 5f on the card. Also watch out for racing at Beverley and Chelmsford.

The third day of Royal Ascot, headlined by the Gold Cup, will take place along with fixtures at Fairyhouse, Newmarket and Redcar. 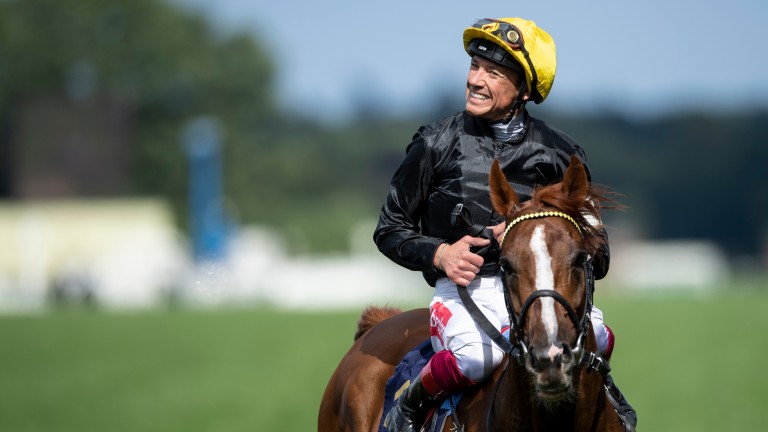 It will be the penultimate day of Royal Ascot, with the Commonwealth Cup, Albany Stakes and Norfolk Stakes among the highlights. Elsewhere, Newmarket is racing again and Lingfield has an evening fixture.

In Ireland, there are meetings at Tipperary and Gowran Park, which stages the Listed Victor McCalmont Stakes for fillies and mares.

It is the final day of Royal Ascot and on the bumper eight-race card there will be a trio of Group 1s with the Coronation Stakes, St James's Palace Stakes and Diamond Jubilee Stakes.

A third consecutive meeting comes at Newmarket in the afternoon, along with evening racing from Ripon and Kempton. There is just one meeting in Ireland at Naas, with the Listed Polonia and Sole Power Stakes part of the card.

Until June 25, there will be no Pattern racing in Ireland but jump racing will return at Limerick.

The first meeting in Scotland is to take place at Ayr. Windsor and Thirsk also stage racing in Britain.

Beverley hosts afternoon racing, while Kempton and one other track provide the evening's entertainment.

Roscommon hosts the second jumps fixture since the shutdown in Ireland, supported by British racing at Haydock, Hamilton and Windsor.

Racing in Britain comes from Bath, Haydock and Leicester.

The first of a three-day extravaganza at the Curragh, with the Spring Fillies (Premier Handicap) alongside a jumps card at Tipperary. Doncaster, Newmarket and Lingfield host racing in Britain.

It is time for the Irish Derby, the third Classic of the season, at the Curragh. Last year it was won by Sovereign for trainer Aidan O'Brien. 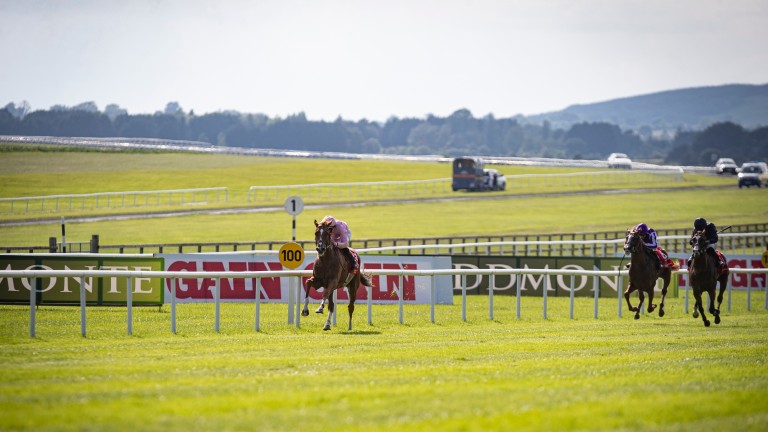 The action does not end there with the Group 2 Greenlands Stakes and the Group 3 Alleged Stakes, as well as the first juvenile Pattern race on the revised calendar, the Listed First Flier Stakes.

There are three Group races in Britain too. Newcastle is in action with the Chipchase and Hoppings Stakes while Newmarket is scheduled to pit seven-furlong specialists against each other in the Criterion Stakes. Redcar and Lingfield also host meetings.

For the second day in a row the only Irish meeting of the day will be at the Curragh, which stages the Group 1 Pretty Polly Stakes, as well as the Group 3 Vintage Crop and Rockingham Handicap. Newmarket and Windsor stage meetings, alongside Hamilton Park in Scotland.

Windsor is back in action for a second day, supported by racing at Yarmouth and Thirsk.

After an action-packed weekend, racing returns to a more sedate pace in Ireland with meetings at Limerick and Kilbeggan (jumps).

Musselburgh is in action for the first time since the resumption. Doncaster also stages racing.

Epsom will host the Investec Derby and Oaks on July 4, after receiving official local approval to stage the Classics on Tuesday, with normal public access to racecourse land forbidden for 24 hours.

The majority of Group races in Ireland have maintained their usual slots, including the Irish Oaks on July 18. The notable exception is the Tattersalls Gold Cup, which has been moved from May to July.

There is good news for Irish jumps fans too, with the Guinness Galway Hurdle and the Tote.com Galway Plate set to go ahead at a seven-day behind-closed-doors festival from July 27.

Jump racing in Britain will come back in the form of a card at Southwell on July 1. There will then be a fixture on Thursday – with a venue yet to be confirmed – before action from Uttoxeter, Newton Abbot, Stratford and Market Rasen the following week.