Four weeks that changed racing: from Cheltenham to shutdown to virtual insanity 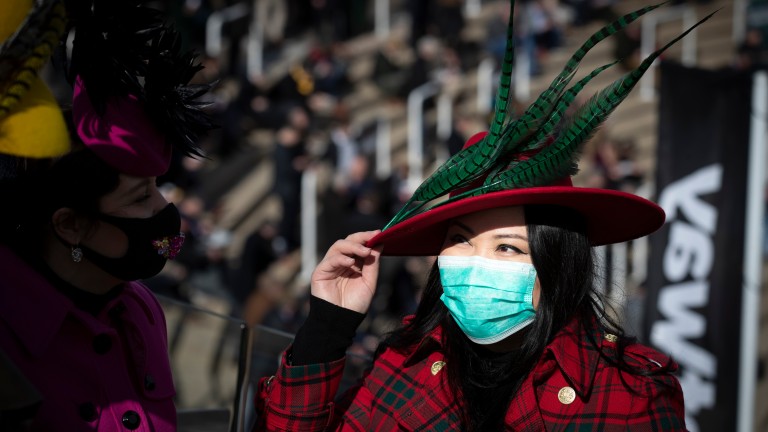 A racegoer dons a face mask at Cheltenham four weeks ago
Patrick McCann
1 of 1
By Peter Scargill UPDATED 3:26PM, APR 6 2020

In the matter of four weeks racing has gone from the frenzy of the Cheltenham Festival, to the despair and confusion of an unprecedented stoppage of the sport and then the remarkable fun and engagement with a virtual race run in place of the world’s most famous steeplechase. Here we look back at what could be racing’s strangest month ever . . . 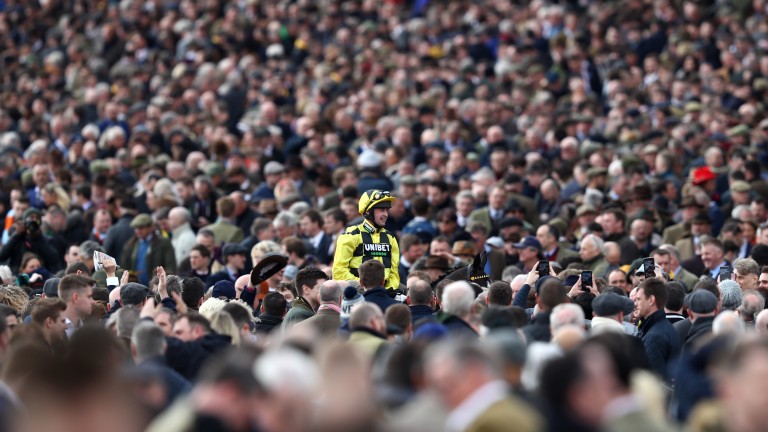 “The advice from the Chief Medical Officer is that at this stage we should not be cancelling such events, so we are not planning to cancel them”
Oliver Dowden, Culture Secretary, talking to the BBC about the Cheltenham Festival on Monday, March 9

Four weeks ago the watchwords for British racing were “business as usual” as final preparations were put in place for the Cheltenham Festival, the four biggest days in the jumps calendar.

Concern had been mounting in the week prior to the festival as cases of Covid-19 crept up in Britain following the February half-term holidays, and other countries across Europe, such as France and Italy, started to report significant numbers of infections.

The daily ritual for many in racing was to log on to Betfair’s special ‘will racing go ahead’ market for the Cheltenham Festival, which grew exponentially to become the most viewed market in the exchange’s history while the best part of £4 million was traded by the time the betting closed. 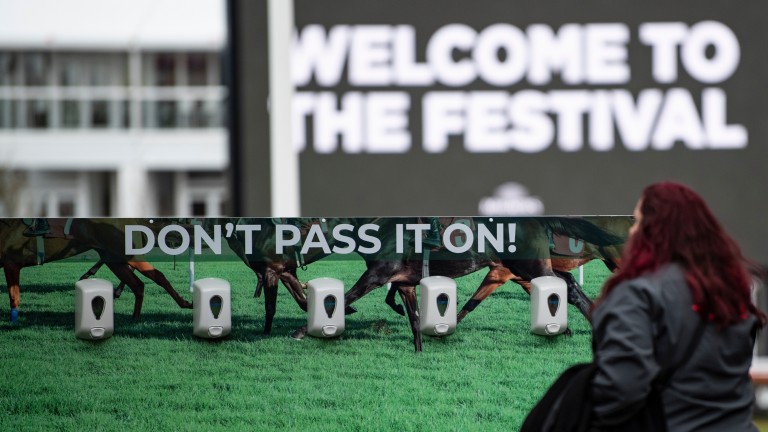 Hand sanitisers were on display at the Cheltenham Festival
Edward Whitaker

Keep calm and carry on

“I don’t think it’s too bad as it is, but if we had had to wait until next week I’d have been surprised if we had a festival at all this year.”
Cheltenham Festival racegoer, Jason Ellis, on Wednesday, March 11

The Cheltenham Festival went ahead as planned with advice from the course not to attend if you had been showing symptoms of the virus, such as a high fever or a new, persistent cough.

Additional stations for boosting personal hygiene were put in place, such as alcohol hand gels and sinks for washing hands, but crowds dropped by approximately five per cent across the week.

It felt increasingly like a last big occasion for the sport, with Alastair Down writing in the Racing Post: “A trick of fancy perhaps but that noise seemed louder than usual as if the crowd were having a final blast before the wider world closes in on us.”

By the end of the four days, sports such as football, rugby, cricket and golf had cancelled or postponed major events but racing forged on hosting the Midlands Grand National (won by Truckers Lodge) at Uttoxeter on Saturday, March 14 with a reasonable crowd in attendance. 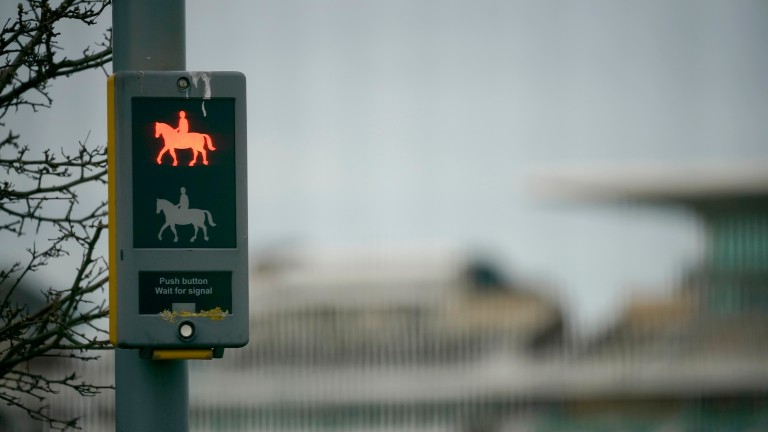 Stop! No Grand National at Aintree this year
Christopher Furlong

“The Randox Health Grand National festival was just three weeks away and it is very clear to us it will not be possible for the event to take place. Public health must come first.”
Sandy Dudgeon, Jockey Club senior steward, Monday, March 16

Ireland had closed racing to spectators the previous Friday and Kelso’s fixture on the Monday after Cheltenham was run behind closed doors in anticipation of plans to limit crowds by the Scottish government.

British racing as a whole followed suit on the Monday, initially until the end of March, with meetings at Taunton and Wetherby on Tuesday, March 17 taking place without any crowds.

However, events in the wider world accelerated just as the BHA were putting plans together, with the government changing its advice on non-essential travel, social distancing and supporting mass gatherings, leading to the Jockey Club cancelling the Randox Health Grand National scheduled for April 4. 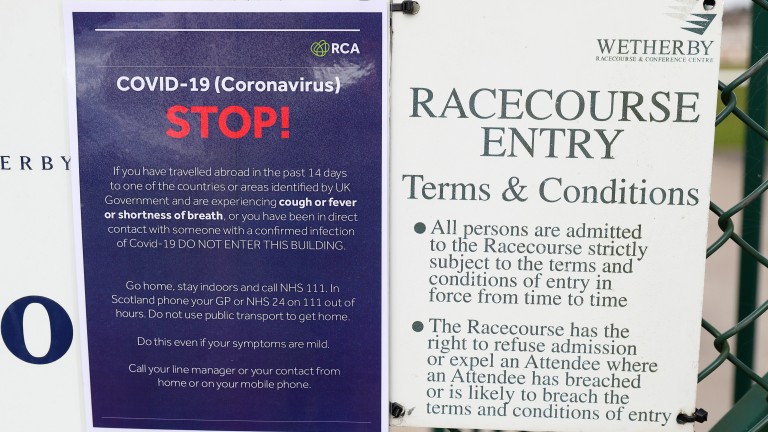 “This is a national emergency the like of which most of us have never seen before... but our first duty is to the health of the public, our customers and to racing industry participants and staff so we have decided to suspend racing following the government’s latest advice.”
Nick Rust, BHA chief executive, Tuesday, March 17

Just a week after celebrating the biggest and best names in jumping at the Cheltenham Festival, the sport was closed down for six weeks by the BHA due to the amended government advice around the coronavirus.

The move was supported by racing’s professional bodies, such as the National Trainers Federation and Professional Jockeys Association, although what the shutdown meant for those participating in the sport was unclear as everyone scrambled to understand the new situation. The BHA promised to help those involved in the sport and get government answers.

Shares in bookmakers tumbled again, as they had done during the previous week, and by the end of the week all betting shops in Britain had been forced to close. Racing in Ireland, however, was given the go ahead to continue after a crunch meeting of executives. 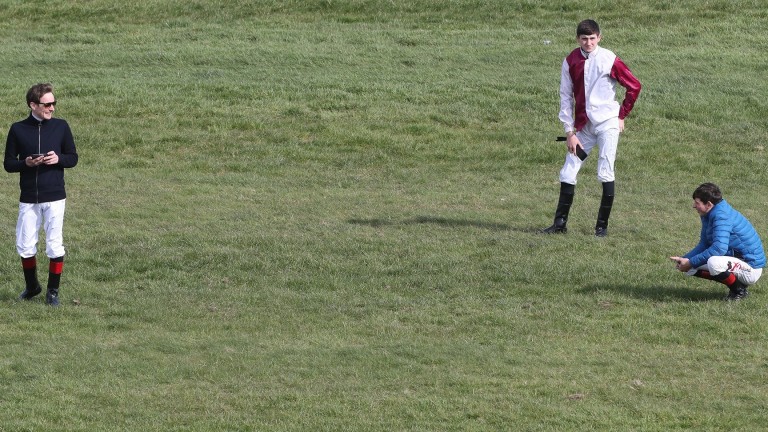 “We’d all love to be racing, but we’d also love to be living in a world where there was no coronavirus.”
Barry Geraghty after Irish racing was halted, Wednesday, March 25

Having soldiered on as racing across the world was stopped, Ireland eventually fell after the government announced all sporting events were cancelled until the middle of April.

With circumstances starting to bite, attention in Britain turned to how to get the sport potentially restarted on May 1, the BHA’s original guideline, with the regulator’s return of racing workstream confirmed to stakeholders that the date remained the aim.

Further plans started to be drawn up between parties to possibly run racing around a series of hubs across the country, with fixtures taking place across a week at a time and all individuals needed for action to take place staying at on-site hotels. Discussions are ongoing. 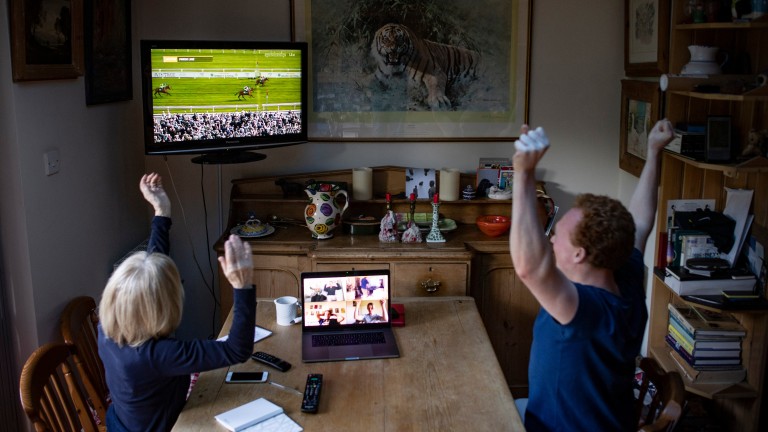 Families across the country took part in the Virtual Grand National

"We had no idea how popular the Virtual Grand National would be as it was a completely unique situation but it became apparent that millions of people were still having their annual flutter on this famous race.”
David Stevens, Coral spokesman, Saturday, April 4

Britain was put into effective lockdown by prime minister Boris Johnson on March 23 with people asked to work from home and refrain from leaving home to slow the spread of the coronavirus.

Most of normal life had come to a grinding halt as the full impact of the illness, which was unheard of before December last year, became apparent to everyone, and the stresses and strains put upon the workers in the NHS were increasingly highlighted as the death toll rose.

With little to break away from the anxiety, stress and boredom of life in lockdown, the 2020 running of the Virtual Grand National, a computer-generated representation of the real thing that had been taking place on ITV for the last three years as a prelude to the Aintree contest, suddenly became something new for people to talk about and be interested in.

Bookmakers stepped in to provide betting on the contest with profits pledged to go to the NHS Charities Together Covid-19 appeal. In total, they donated over £2.6 million with many punters who took part in the event, watched by 4.8m people, also donating their winnings.

For a brief hour or two on Saturday evening people engaged in some light-hearted entertainment, bantering over the events of the race and being able to enjoy a guilt-free bet.

It was an unexpected end to the most extraordinary few weeks we have ever seen.

FIRST PUBLISHED 8:00AM, APR 6 2020
It was an unexpected end to the most extraordinary month we have ever seen

Vital Irish racing isn't overlooked again when other sports get crowd increases 'It's been absolutely incredible' - on-course bookmakers relish Glorious return Racing has its problems and it's up to racing to solve them 'Like a man folding a deckchair' - amateur legend Brod Munro-Wilson dies at 76 Back to normal? We road-test the new raceday experience Extra money - but less competition and lower crowds: the impact of more racing