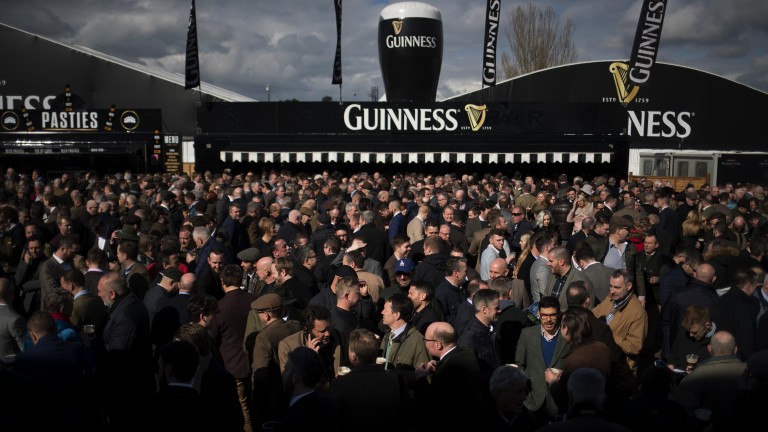 Plenty of racegoers are desperate for the festival to be on
Patrick McCann (racingpost.com/photos)
1 of 1
By Stuart Riley UPDATED 6:48PM, MAR 9 2020

You will have heard of coronavirus by now – or more specifically the Covid-19 variety of the virus that started in the Wuhan region of China and is spreading rapidly around the world.

More than 100,000 cases have been reported globally with 76 countries affected — resulting in more than 3,400 deaths.

The international nature of this potentially fatal virus means authorities worldwide are reacting rapidly and sporting events have been some of the first to be affected.

The number of positive tests in Britain jumped to 321 on Monday, while a fifth patient with underlying health conditions was reported to have died as a consequence of the virus.

Could coronavirus affect racing in Britain?

In short, yes it could. Italy is the worst-affected country in Europe with more than 5,800 cases prompting the government to impose a strict quarantine on the north of the country, impacting an estimated 16 million people.

All sport in Italy, including all Serie A games, will be played behind closed doors until April 3.

Click here for racecards, latest odds, betting advice and everything else you need to know about the Cheltenham Festival

Formula One's Chinese Grand Prix, on April 19, has already been cancelled, while Paddy Power make the opening ceremony for the Olympics in Japan – scheduled for July 24 at Tokyo's Olympic Stadium – a 4-6 shot to be postponed, cancelled or moved from its intended venue.

Racing has not escaped the disruption, with Meydan's Super Saturday card took place behind closed doors. Tuesday's meeting at Chantilly in France was among three fixtures in France also run without a crowd in attendance.

We are not there yet, but if the number of cases in Britain spikes then racing could well be hit. If things stay as they are, then everything is likely to carry on as normal.

What if there are more confirmed cases?

Prime minister Boris Johnson unveiled a UK-wide coronavirus action plan on Tuesday, and health secretary Matt Hancock reiterated there are no immediate plans to cancel large scale events, such as the Cheltenham Festival which is due to begin on Tuesday.

Furthermore, while shutting down a sporting event is less effective as a prevention method than closing major airports and transport systems such as the London Underground, it is also vastly less disruptive to the general public and so often deemed the starting point.

Could the festival be held behind closed doors, or elsewhere?

In Japan (more than 300 cases) and Hong Kong (more than 100) spectators have been banned from racecourses as countries with a rising number of contaminated individuals look to minimise the potential for spreading the virus while keeping the show on the road. The Swiss government have banned gatherings of more than 1,000 people in a country with 68 cases as of noon on Wednesday.

Running the festival behind closed doors instead of cancelling the meeting would be preferable for racing fans, the sport's participants and bookmakers alike, and for the sport too in terms of Levy-generation, but the balance sheets of Jockey Club Racecourses would take a hammering unless their insurance covers the commercial loss of the meeting technically going ahead, albeit behind closed doors. The course will not comment on the details of their insurance arrangements.

The problem with relocating is if a gathering of 260,000 in Cheltenham is problematic, the same is likely to apply were it moved to Ascot, Ayr, Doncaster, Haydock, Newbury or Sandown.

What happens if it's postponed?

Foot and mouth caused the 2001 Cheltenham Festival to be cancelled. The initial contingency plan was for a delayed festival to take place in April, with the then three-day event pencilled in for April 17-19. When that too had to be abandoned the governing body at the time, the British Horseracing Board (BHB), looked into trying to salvage the championship races at other venues – with attempts made to add the four championship races and Arkle to Sandown's season-ending meeting, but those plans failed.

The congested nature of the spring calendar, with major festivals at Aintree (April 2-4), Fairyhouse (April 11-13), Ayr (April 17-18), Sandown (April 25) and Punchestown (April 28-May 2), means even if the coronavirus epidemic is abated, finding a slot for the festival would not be straightforward.

But with Cheltenham already scheduled to race on April 15 and 16 (a Wednesday and a Thursday) adding a Tuesday to that fixture, as they did in 2001, would look the most obvious solution.

How much would it cost the industry?

In 2001 when the festival was a three-day event, the loss of Cheltenham was estimated to have cost the betting industry alone £100 million, while local tourism reportedly suffered an estimated £10 million hit. The course itself will not comment on the financial impact suffered.

These days the festival is an altogether bigger beast and those numbers can be inflated. Bookmakers do roughly £450-£500 million in turnover which, with an even run of results, returns around £50 million in profit and with the levy at ten per cent that is roughly a £5 million hit for the sport as a whole if those four days are lost.

And it is not just those four days. The reason bookmaker offers are so enticing around Cheltenham is because it is a major account recruiting event. While the Grand National may open more accounts, they are generally one-off bettors, the industry has learned Cheltenham activates accounts that continue to bet throughout the year and thus further chipping in to the sport's levy return.

FIRST PUBLISHED 9:35AM, MAR 2 2020
If the number of cases in Britain starts to rise and politicians become involved, then all bets are off