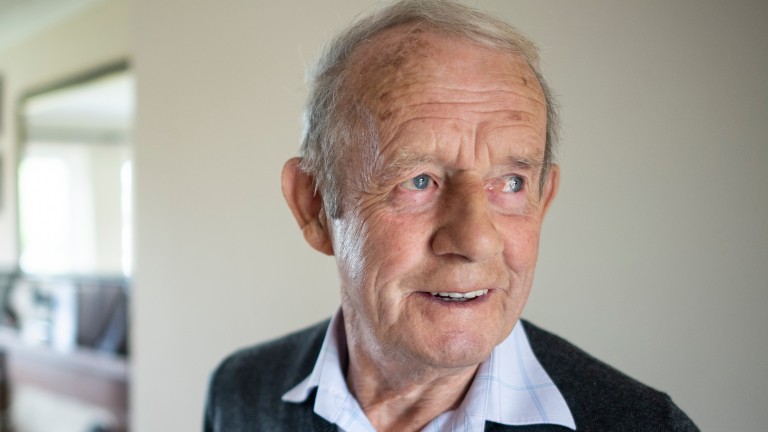 Much was made of Corky Browne's professional prowess when Nicky Henderson's long-time head lad confirmed last week he would be standing down after four decades. All of it was warranted, yet as homages were paid to the man whose magic hands sustained numerous top-class horses, his most admirable qualities were overlooked.

Browne is uppermost a family man. Raised as such in the rural pastures of County Cork, he never forgot his roots. He still espouses values that have been cast aside, like roadwork and linseed mashes, in the headlong rush to modernity.

An afternoon in his company passes quickly. He has endless stories to tell of great horses, together with those who rode and trained them. But you leave feeling quietly humbled by the hardships borne without complaint by a man who arrived in Britain to work at Fred Winter's all-conquering stable almost 60 years ago.

He has lived in Lambourn ever since, and happily enough, too – although not necessarily by choice. Lambourn was where he built his nest, married Diane soon after Anglo's Grand National triumph in 1966, and raised two daughters. Even now, however, Browne, is not quite able to call it home.

"From the first year I came to England I'd go back to Cork for three weeks every summer," Browne, 77, relates. "I was the only one of six children who worked with horses. We had a happy childhood. Whenever I went home it was terribly hard to leave it and go back to work.

"The longer you stayed, the worse it got," he continues. "Once a year was enough; I couldn't have handled it any more. Even now, I still have tears in my eyes when it's time to come back to England. But Lambourn is where my family is." 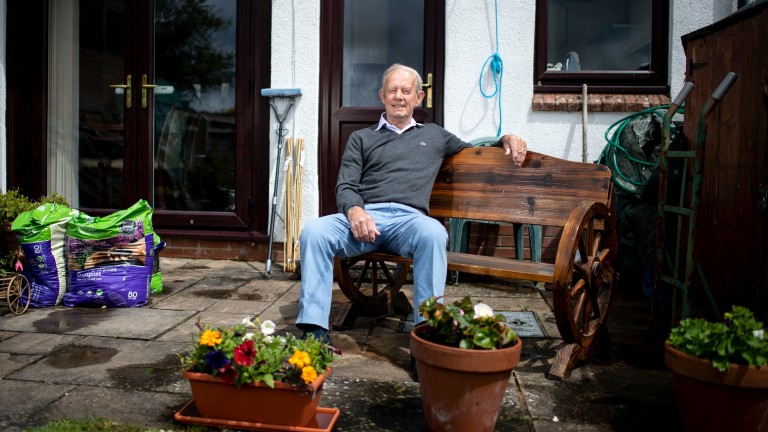 Ironically, had he been able, Browne would have left within days of his arrival towards the end of 1962. It was the winter when hell's frozen wrath enveloped the country. Lambourn was completely cut off; for weeks on end Browne had to walk three miles to Baydon for his supplies of bread and milk.

"There are lots of ditches and hollows across those fields but you couldn't see any of that," Browne recalls. "There were snowdrifts everywhere; they covered over the front doors of the caravans we lived in. We spent five whole days shovelling snow. Every time we'd clear a path it would snow again and freeze over.

"We couldn't get the horses out of their boxes for six and a half weeks," he continues. "They were as fresh as anything; the slightest thing would make them fly around in their boxes. You can imagine how tight we had to sit when we could finally ride them."

It was some baptism, although ironically, it probably gave Winter a valuable insight into Browne's unswerving commitment. It wouldn't be long before Browne started looking after the yard's better horses. He was content, despite those childhood aspirations to become a jockey having passed unfulfilled.

Three years after the freeze-up and he took Anglo up to Aintree for the 1966 Grand National. The 50-1 shot returned home a winner, and Browne with a wife after he'd promised Diane he would marry her in the event of victory. He was true to his word.

Given Browne's devotion to horses it was inevitable he would end up looking after one on "Millionaires' Row", the hallowed row of boxes at Uplands which, in 1973, housed equine titans in Bula, Crisp and Pendil. Next to them stood the newest recruit: the ill-fated Killiney, who was Browne's pride and joy.

Years of excitement lay ahead but in 1975 Browne again put his family first. "I decided to leave," he recalls with more than a hint of wistfulness. "I didn't want to leave because it was a cracking job, but I had a wife and two kids. I wasn't earning enough money; I had no choice."

'Roger had told him I would be the right man'

He went to run Windsor House Stables, which was a spelling station for sour and injured horses. He was employed by Roger Charlton, who would recommend Browne to Henderson when the latter started training in 1978.

By then, however, Browne was no longer at Windsor House. He'd signed off when Charlton put the place up for sale on landing the plum role as Jeremy Tree's assistant at Beckhampton. When Henderson came calling Browne was painting stables and running rails at a local show jumping yard for £1 an hour. He'd been doing that for a year.

It was an extraordinary predicament for one of Browne's talents. Yet he makes light of it, insisting he had bills to pay. He was also surprised when Henderson told him what he had in mind. "I knew of him because he was an amateur rider who had horses with Fred when I was there, but I didn't know his first name," Browne says of the man he would help to five trainers' championships in the years ahead.

"I said to Nicky: 'You've been assistant trainer to Fred for the last five years, you know all the lads there. Any one of them would suit you well.' But I think Roger had told him I would be the right man."

So started one of the most enduring of alliances. It has long passed into folklore how Browne was instrumental in becalming the flared tendons of See You Then, who won three successive Champion Hurdles from 1985.

"We were lucky Windsor House had a swimming pool," Browne reflects. "I used to put See You Then in there at five in the morning, so freezing cold that I had to break the ice to stand him up to his knees in water for an hour at a time."

As Henderson was bringing See You Then to a peak for his first Champion Hurdle triumph in 1985, another horse was preoccupying Browne. First Bout had shown such abundant promise on joining the yard as a back-end four-year-old in October 1984 that Browne placed the first of seven decent ante-post bets on him to win the Triumph Hurdle.

First Bout would prevail, in the process landing Browne one of his most lucrative paydays, but the journey to Cheltenham was fraught. "Everything was fine until the weather came down [in January]. We were into February and the horse still hadn't run over hurdles," Browne relates.

"We had to make sure he wouldn't be balloted out, so he went to Plumpton [16 days before the Triumph] and won there. But he still wasn't sure of getting in, so we had to run him again at Newbury."

It was hardly the ideal preparation for a horse on whom Browne stood to win a small fortune. "Before the Newbury race I told [jockey] Steve Smith Eccles to save the horse as much he could, so what does he do?" Browne relates. "He only goes and wins by half the track."

Browne then kept First Bout active with swimming sessions during afternoons when Henderson was away at the races, and the gamble was duly landed.

Asking Browne to single out one horse ahead of another is like asking a parent to choose their favourite child. "Many think Sprinter Sacre was the best of them but I don't agree," he says. "When he came back [from injury], it made him a bigger hero than he was, but it was more about emotion than the horse's brilliance.

"That comeback was down to the guv'nor, who gave him all the time in the world. Sprinter was obviously very good and then, almost straight afterwards, we get Altior. How lucky were we?

"I wish Altior had run in last season's King George," he continues. "There could be a serious lot of good horses when he goes up in trip next season. If Altior won the King George they'll have to think about the Gold Cup. That's a different question, but I do think Altior is better than Sprinter Sacre."

No doubt Browne will follow the stable's fortunes closely in retirement. He has already told Henderson he expects him to have at least three winners at Cheltenham – "Nicky told me he'd see what he could do" – but Browne will be spending more time playing golf and snooker, and with his family. 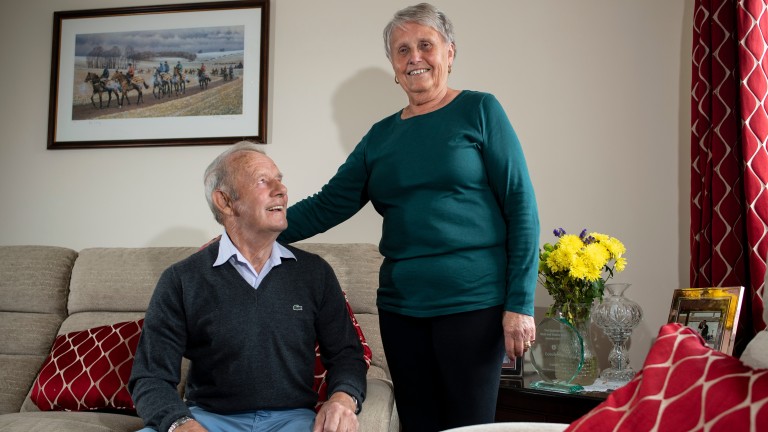 "My wife, Diane, will have to get used to having me around the house," he says. "She'll probably end up shooting me, but if it hadn't been for her I probably wouldn't have got through it all.

"My dinner was on the table every night, no matter what time I came home," he continues. "Diane has put up with a lot, because I'd take my worries home sometimes. She survived cancer six years ago but everything's fine now, touch wood.

"I think Nicky will go on training until he kicks the bucket but it's over for me, anyway. I've had a great run, far better than most in the game. I've worked for two great trainers in Fred and Nicky, and if I get another ten years I'll be more than happy."

The horse they were calling the English Arkle

Fred Winter's Uplands stable in Lambourn was left reeling by the sequence of events that unfolded in the spring of 1973. Pendil had been overhauled close home by The Dikler in the Gold Cup at Cheltenham; Crisp likewise by Red Rum in the Grand National with 12st on his back. Then came Killiney's fatal fall at Ascot in April.

Corky Browne was Killiney's lad and used to ride him at home. He describes the horse as "a Christian in his box but lively outside it and very strong, which is why he liked to make the running".

Killiney had won all eight starts over fences with ease before Ascot, including the Sun Alliance Chase at Cheltenham. Browne relates the sequence of events in sharp, staccato bursts, as though he was reading from a ticker-tape spilling words from a cypher.

"Bob Turnell ran a horse [Magellan] in that Ascot race. It was ridden by his son, Andy. Andy fancied him and wanted to make the running. Fred wasn't keen for Killiney to run because the ground was quick but the owner wanted to. He told [jockey] Richard Pitman not to let Killiney go flat out.

"Turnell's horse went to the ditch at the bottom of the hill," Browne continues. "He took off too soon and didn't make it. He hit the fence with his chest. Well, my horse went to take off from behind him and put his foot in the ditch. He had no chance."

Killiney broke his shoulder in the fall and was put down. "I was devastated," Browne says. "He was a massive, big horse who won all his chases by daylight. They were calling him the English Arkle."

Vodkatini: infuriating yet talented character who chose when he wanted to race

Jimmy Winkfield: the American jockey who escaped the Bolsheviks and Nazis

Monet's Garden: 'As we got to know him he never let you down, even if he got beat'

FIRST PUBLISHED 2:30PM, MAY 15 2020
Even now, I still have tears in my eyes when it's time to come back to England. But Lambourn is where my family is