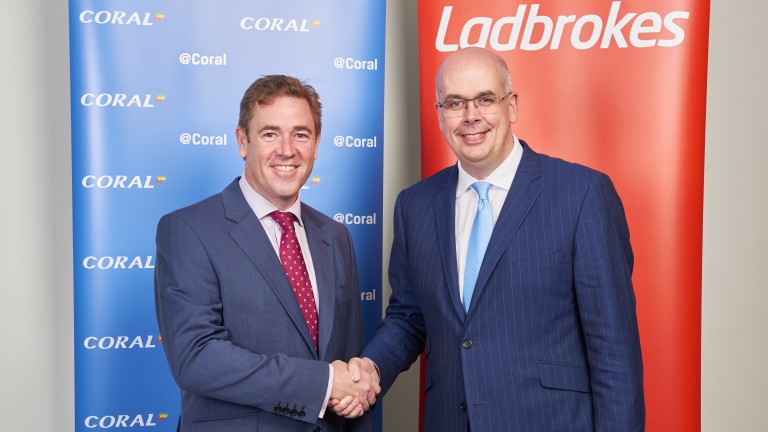 Two of the most famous names in British betting officially join forces on Tuesday when Ladbrokes Coral plc begins trading on the London Stock Exchange, the latest seismic change in the betting industry.

More than 16 months since the Racing Post revealed the two bookmakers were in talks to bring their two businesses together, the £2.3 billion merger will finally complete.

In a short announcement to the stock exchange on Monday evening, Ladbrokes said: "Ladbrokes plc announces it has today changed its name to Ladbrokes Coral Group plc. The merger is expected to complete on November 1, 2016."

Although the two firms have adopted a strategy that means customers will continue to see and deal with two distinct brands, the merger creates Britain's biggest betting shop operator.

The company will have more than 3,500 shops, meaning they leapfrog William Hill into first place.

The deal also means the group will be one of the biggest online players within the UK market.

Analyst Gavin Kelleher of Goodbody said: "It's a pretty significant entity and it will be the largest retail player in the UK.

"They will be a big player in traditional betting and will have a decent enough online presence as well under the two brands."

Kelleher said customers would be unlikely to see any great differences in the short term.

"For the foreseeable future they're going to operate as two separate brands so the betting public probably won't notice a lot of change because a lot of what will happen will be behind the scenes," he said.

"However, given the group has got bigger scale there's the potential over time that they could offer better value and better products."

The merger is the latest to be completed in a wave of consolidation that has taken place in the gambling industry in recent years.

Paddy Power and Betfair completed their £6 billion-plus merger in February at the same time that Sportingbet owners GVC's £1.1bn acquisition of Bwin.party came into effect.

However, Hills have so far missed out, with merger talks with Canadian gaming giant Amaya coming to nothing just a few months after Hills themselves rejected a joint-takeover bid from Rank Group and 888 Holdings.

More deals expected
Kelleher said he expected more deals to be done in the sector.

"You'd have to think there's the potential for more M&A [mergers and acquisitions] given the challenges in the UK market at the moment from tax, regulation and competition," he said.

"The advantages of scale are the potential to have the best products, the best people and the best marketing."

Ladbrokes attempted to take over Coral for £363 million in 1998, a move blocked by then-secretary of state for trade and industry Peter Mandelson, who said the purchase "would damage competition and disadvantage punters".

Industry veteran Warwick Bartlett was chairman of the British Betting Office Association at the time and, with Hills, led a campaign opposing the takeover.

He said the contraction in the independent sector and rise of online betting meant the deal could go through this time.

"I think the difference in 1998 was that you had a lot more independent bookmakers than today and they provided the competition," Bartlett said.

"What has changed is the internet, and payout to the customer has never been higher."

However, Bartlett said the Competition and Markets Authority (CMA) was right to order the sale of shops as people still like betting shops.

"Therefore the CMA stepped in to say shops needed to be sold to create more competition," Bartlett added.

"Where I think they've gone wrong is they would have done better if the shops had been auctioned, which would have enabled other people to come and bid for them.

"I think that would have created more competition and the present arrangement probably creates less."

The merged company is expected to have its headquarters in Stratford, London with Ladbrokes chief executive Jim Mullen continuing as group chief executive.

Chairman John Kelly has experience of both companies as the Ladbrokes chairman was also founder and former chief executive of Gala Coral Group, having led a management buy-in from Bass in 1997.

Gala Coral chief executive Carl Leaver is to stay on for a year as executive deputy chairman, while Coral chief operating officer Andy Hornby will continue in the same role for the merged company.

It has been reported that up to 700 jobs could be at risk as a result of the merger.

Why have Ladbrokes and Coral merged?
Size is becoming everything in the gambling industry as the bigger the company is, the easier it is to absorb the increased regulation and taxation the sector is facing.

What are the other advantages for the two companies?
One of the main reasons for the merger is that the two firms hope to create faster online growth having previously lagged behind the likes of bet365 and Paddy Power Betfair. And while they now become Britain's biggest betting shop operator, they also have increased international diversity through businesses in Ireland, Spain, Italy, Belgium and Australia to mitigate any further regulation, especially around gaming machines.

What sort of cost savings are expected from the merger?Ladbrokes and Coral have said they will be able to achieve annual synergies of at least £65 million.

What differences will customers see? The merged company intends to follow a "dual brand strategy", with the Coral and Ladbrokes names continuing and a plan to continue to offer distinctive products and promotions.

What about online?
The same strategy applies, while the enlarged group intends to continue with two apps rather than one.

So where will the cost savings come from?
The two firms have said they expect to combine their core trading platforms, IT systems and retail governance teams. It has been reported up to 700 jobs could be lost.