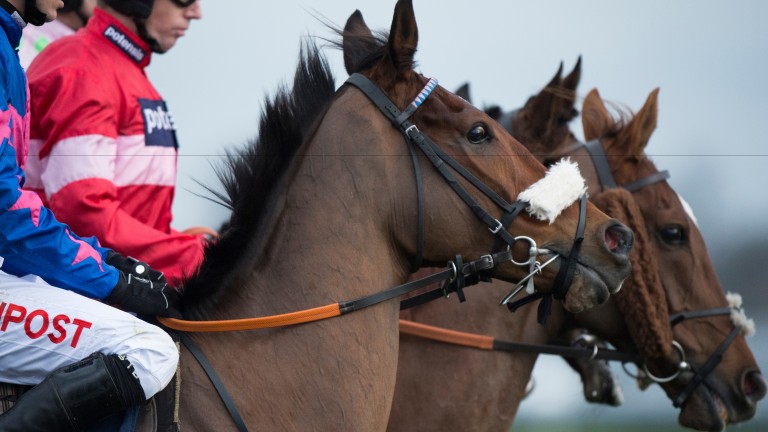 First run in 2005, the Betfair Chase is but a baby in racing terms, yet in its brief life it has been the scene of some thunderous rivalries and dazzling performances.

It was a decade ago that Kauto Star won the first of his four victories with a 17-length romp, and four winters have passed since he turned a bittersweet swansong into a triumphant renaissance in 2011.

Since Kauto Star's retirement, the Betfair Chase has passed between two of the strongest candidates for his successor as the sport's pre-eminent chaser, Cue Card and Silviniaco Conti. They have each won it twice and again line up this afternoon in a race that looks a match for any we have seen before.

Not just are these two titans of the sport back again, they are joined by the 2015 Gold Cup winner Coneygree, the upwardly mobile Charlie Hall winner Irish Cavalier and Seeyouatmidnight, surely the highest-class chaser to be trained in Scotland since long before the Betfair Chase was conceived.

But first Cue Card, almost certainly the most popular horse in Britain and flagship of the ever-strengthening Colin Tizzard armada. Had he not tumbled over when still brimming with fight at the third-last at Cheltenham in March he might have been a Gold Cup winner. That was the only blemish on an otherwise flawless season that included a seven-length win over Silviniaco Conti here 12 months ago.

Yet all is not perfectly rosy in the Cue Card kingdom. His last two races have ended in odds-on defeat, at Punchestown in April and then three weeks ago in the Charlie Hall. Then he was ridden to dominate, given an aggressive ride by Paddy Brennan, but the toll of top weight began to tell and he faded to third. He lost little in defeat yet, with only one win in four, has something to prove now. Rising 11, this might be his last, best chance to follow in the footsteps of Kauto Star by winning what is now styled the Chase Triple Crown – the Betfair Chase, King George and Gold Cup.

To take the first step on that little-travelled road he must face down the strongest field ever assembled for the Betfair Chase. Among his rivals is Irish Cavalier, his Charlie Hall conqueror, but the horse who leads the opposition is Coneygree, who missed almost all of last season with injury, denying him the chance to defend his bravura Cheltenham victory of 2015.

He is trained by the Bradstocks, who masterfully – and daringly –guided him to become the first novice to win the Gold Cup in more than four decades. "It was amazing the emails we got before the Gold Cup saying what w*****s we were for running him, and how we didn't know what were doing," Mark Bradstock recently said of that season. No doubt there will be some who consider it madness to return from a year off in a race as hot as this, but the Bradstocks have never wanted for confidence in their swashbuckling front-runner, and he has never let them down.

Silviniaco Conti is only ten but nonetheless feels like one of the last links to a previous era. Trained by Paul Nicholls, he once shared a stable with the likes of Denman and Kauto Star, and he also shares more than a little of their stardust. A two-time King George winner as well as a double Betfair Chase winner, Conti was not at his best last season but rider Noel Fehily said this week he felt his mount was back to his old self. If so, there is plenty to fear.

Or maybe, in a week in which the BHA announced plans to boost jump racing in the North and Scotland, Seeyouatmidnight could land a historic victory by blowing away his southern rivals. Top-class jumpers trained north of the border have been thin on the ground in recent times but Seeyouatmidnight could be the best in decades.

His warm-up, a 12-length thrashing of JLT second Bristol De Mai at Carlisle, could have been little better – yet, for all that, victory here would be one of the most momentous Scottish wins over the auld enemy since Alex Jackson left Wembley with the match ball in 1967.

The Betfair Chase may be getting the five-star reviews but it is not the only show in town today. Aintree and Punchestown Grade 1 winner God's Own faces former Champion Chase hero Dodging Bullets in the Stella Artois 1965 Chase at Ascot, while on the Haydock undercard Albert Bartlett winner Unowhatimeanharry shoulders top-weight in the fixed brush hurdle. Not a bad build-up for a Betfair Chase to make the ground shake.

FIRST PUBLISHED 4:14PM, NOV 18 2016
Since Kauto Star's retirement, the Betfair Chase has passed between two of the strongest candidates for his successor as the sport's pre-eminent chaser, Cue Card and Silviniaco Conti