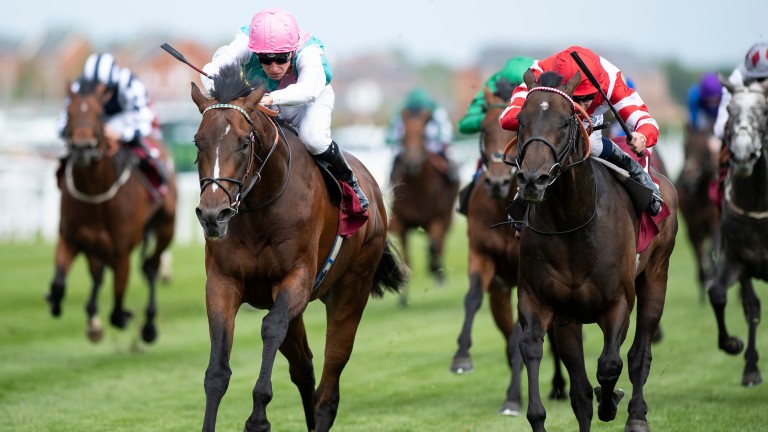 Headman: was among the entries for the Prince of Wales's Stakes
Edward Whitaker
1 of 1
By Jonathan Harding UPDATED 2:00PM, JUN 11 2020

Headman is among 12 entries for the Prince of Wales's Stakes, the Group 1 highlight of the second day of Royal Ascot next Wednesday.

A decision has not yet been made on a concrete target for the dual French Group 2 winner, who could instead be aimed at the Queen Anne Stakes (1.50) on the first day of the fixture.

"We're very happy with Headman and we are debating along with the owners [Juddmonte] where he should run," said Roger Charlton.

"He clearly stays a mile and a quarter so we'll have to decide a little bit nearer the time. I'm assuming the ground will end up good by the middle of next week though I'm not particularly thinking about the conditions. I'll discuss it with the owners – nothing is decided yet."

Aidan O'Brien has made four entries for the Prince of Wales's Stakes, including last year's Juddmonte International winner Japan and Magical, who landed Ascot's Champion Stakes in October.

John Gosden, who won the Prince of Wales's with The Fugue in 2014, has entered Lord North, Mehdaayih and Terebellum, winner of the Group 2 Dahlia Fillies' Stakes at Newmarket last weekend.

Andrew Balding, who won this year's 2,000 Guineas with Kameko, has two entries for King Power Racing: Bangkok and Fox Tal.

There were 115 entries made across six races for the second day, which will also include a consolation race for the Royal Hunt Cup.

The other Group contest on the card, the Hampton Court Stakes, has attracted 16 prospective runners including Juan Elcano, who finished fifth in the 2,000 Guineas at Newmarket last Saturday.

Among his potential rivals are Kenzai Warrior, who was ninth behind Juan Elcano after a slow start, Via De Vega, fifth in the Group 1 Criterium de Saint-Cloud and the Charlie Fellowes-trained King Carney.

Albigna heads field of 15 for Irish 1,000 Guineas on Saturday at the Curragh

FIRST PUBLISHED 1:25PM, JUN 11 2020
He clearly stays a mile and a quarter so we'll have to decide a little bit nearer the time

The King George was great but this Saturday at Ascot is far more important King George analysis: 'Adayar might not be the best colt in his stable' Forgive the gushing enthusiasm but I feel like I have seen something special Who is better - Hurricane Lane or Adayar? Our experts have their say Zain Claudette holds on to provide Ray Dawson with emotional first Group win Oisin Murphy in red-hot form as four-timer extends lead in jockeys' title race