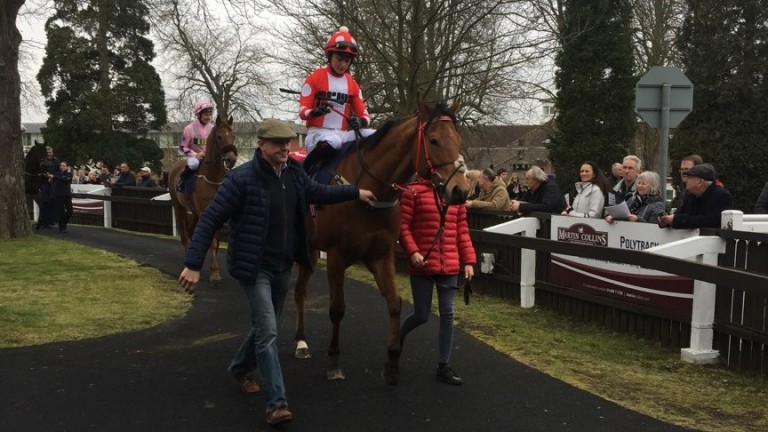 Phil McEntee and owner Steve Jakes are "absolutely fuming" after Spare Parts just missed the cut for Good Friday's Lingfield apprentice handicap and has been forced instead to take his chance in the Sunbets All-Weather Mile Championship, in which he will have no realistic prospect of success.

Captain Lars, his rival in the battle to be the all-weather's winningmost horse, a title that carries a £10,000 prize, has been declared for a handicap at Newcastle and needs only to finish in the first four to go ahead, each horse having so far accumulated an identical seven wins, two seconds, two thirds and a fourth.

The conditions for every race on Finals day, bar the apprentice handicap, stipulate that runners must have run three times on the all-weather through the winter or else have won a fast-track qualifier.

A 'three runs' clause was expected to be introduced this year for the apprentice race after complaints from some of the main all-weather supporters 12 months ago, but it was not formally requested of the BHA, a situation for which Arena Racing Company apologised this week.

Spare Parts will run instead in the Sunbets All-Weather Mile Championship, a £150,000 conditions race in which he faces ten much higher-rated rivals headed by hot favourite Second Thought, who on official marks is 19lb his superior.

McEntee said: "Steve and I are absolutely fuming. Spare Parts has been kept out of the race by six horses who have run three times between them on the all-weather this winter. That's where our gripe is.

"It's left a really sour taste in the mouth, especially from Steve's point of view, as we've supported the all-weather all winter and Steve's probably had 80 or 90 runners. We just wanted a fair crack of the whip."

McEntee added: "War Glory, Squats and El Hombre haven't run on the all-weather at all. I don't blame the trainers for taking advantage – it's the rule that's the problem and, as everyone knows now, they promised to change it last year.

"I thought Spare Parts would get in off 91, and three others on that mark have done, but this situation has been in the offing for a while now and so we've declared in the Mile, which will be live on ITV. All-weather regulars will still get the chance to see him and it will be a day out for the staff. I guarantee he won't be last."

There were no major surprises among the 48-hour declarations for the remainder of the Lingfield card, on which the feature Betway Easter Classic includes a rematch between Mr Owen and Master The World, who were separated by just a head in last month's Group 3 Betway Winter Derby, when Mr Owen appeared to swerve at the shadow of the big screen and was subsequently disqualified.

Newcastle's Good Friday card features a strong renewal of the £100,000 32Red Burradon Stakes, a 1m Listed race to which Jeremy Noseda has rerouted his Kentucky Derby hope Gronkowski in the hope of picking up crucial qualifying points for Churchill Downs.

The colt has won his last three races and is held in the highest regard, but on paper he faces no easy task conceding the 5lb sex allowance to Mark Johnston's filly Nyaleti.

FIRST PUBLISHED 10:50AM, MAR 28 2018
Steve and I are absolutely fuming. Spare Parts has been kept out by six horses who have run three times between them on the all-weather