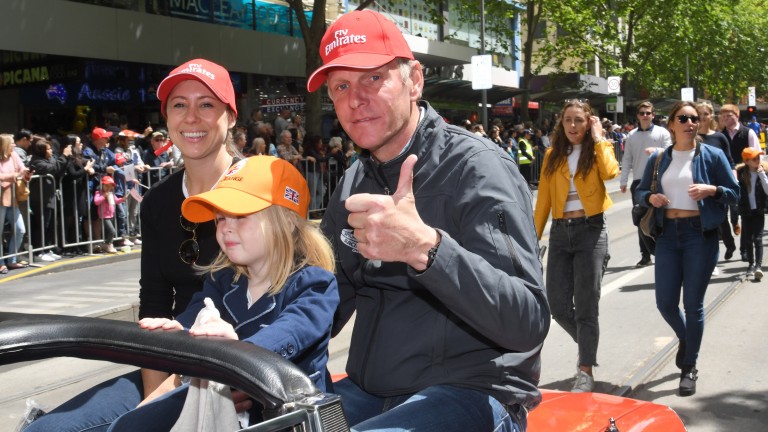 Tony Martin admitted he had never seen anything like it as thousands of people lined the streets of Melbourne to catch of glimpse of the trainers and jockeys competing for Tuesday's Melbourne Cup.

The parade, traditionally staged on the day before the big race at Flemington, saw connections of all 24 runners make their way through the city in open-top cars, flanked by dancers, musicians and former legends of the turf such as Might And Power.

At the conclusion of the parade at Federation Square, leading industry figures including Victoria's minister for racing Martin Pakula addressed the crowds.

The full Heartbreak City team, including trainer Martin, were on hand to take it all in and could not believe the reception from the people of Melbourne.

"We've never seen the like of this before," said Martin. "I'd never heard of it before but it's some party!"

Charlie Appleby was also enjoying the festivities as he continues to revel in a remarkable Australian spring campaign, with Qewy and Oceanographer set to represent him on Tuesday.

"This is amazing and we're very privileged to be here," he said. "It's great for His Highness and Godolphin to have a team of horses like we have going into the race."

Godolphin chief executive John Ferguson added: "It's an amazing day and this parade gets stronger and stronger every year.

"We're all really looking forward to tomorrow with a number of live chances carrying the blue colours."

Also out in force were the team behind leading British hopeful Big Orange, with Michael Bell enjoying the bright sunshine and hoping for as little rain as possible.

"It's a very exciting thing to be a part of," he said. "They organise this so well and it's great to be able to get all the public involved to bring the race closer to the nation."