Confidence in Wholestone despite drop in distance 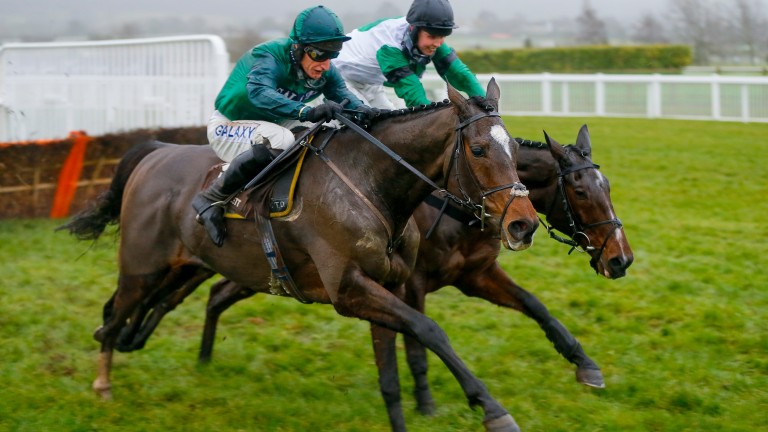 Wholestone, winner of a trial for the Albert Bartlett last time out, bids to prove his versatility as he drops back in trip seeking a second Grade 2 prize.

Running for the Bristol De Mai connections of trainer Nigel Twiston-Davies, jockey Daryl Jacob and owners Simon Munir and Isaac Souede, Wholestone drops in trip, but he has already run well at around this distance, finishing a narrow second in this Grade in November.

Alan King has won the race three times in the last five years and his representative here is Keep In Line, who has run well in two Grade 2 races over 2m.

This race has a solid pedigree having been won in the past by Yanworth, At Fishers Cross, Bobs Worth and Diamond Harry.

Lizzie Kelly, rider of Coo Star Sivola
It's the same course and distance as last time [when he won a Listed race], which is a bonus. This will tell us whether we should be going for the festival and I'll be interested to see how he gets on with ground that should be better than it was on New Year's Day.

Colin Tizzard, trainer of Elegant Escape
I think he is a thorough stayer and I am looking forward to seeing him run up that Cheltenham hill. He wasn't beaten far at Newbury. We will see what he can do against this type of opposition.

Tom Lacey, trainer of Kimberlite Candy
He is in good nick and has earned his place. We will learn an awful lot about him. Hopefully some rain will come overnight.

Paul Nicholls, trainer of Topofthegame
He won nicely at Ascot on his only start for us when he was a bit green in front. He is a horse for the future and a chaser in the making. It is a competitive field but he is a nice prospect for further down the road.

Nigel Twiston-Davies, trainer of Wholestone
Wholestone has done very little wrong. It would be better if it was over three miles but he seems to have quite a lot of class as well. The softer it gets overnight - and they say there will be a little bit of rain - the better for him. Hopefully he will win despite the trip.

Alan King, trainer of Keep In Line
He has been running well over two miles without quite delivering what we were hoping, so we are stepping him up in trip in the hope that it might eke out a bit more improvement.

Donald McCain, trainer of Mr McGo
He beat a fair horse at Bangor in Drumcliff which was over two miles which was never going to play to his strengths. He was happier stepped up in trip on softer ground at Chepstow where I noticed his time was seven seconds quicker than the other division which was won by Constantine Bay. It would be of more benefit if the ground was slowish and there is rain around.

Philip Hobbs, trainer of Sneaky Feeling
He's a nice horse and won well at Newbury the other day on his first start over hurdles. Obviously it's a strong race but he's working well at home and goes there with a good shout.

Nicky Henderson, trainer of William Henry
He did well at Cheltenham and then didn't need to improve to win at Newbury. I know how good that form is as I trained the second and third – and they wouldn't be horses for graded races. I can't believe the extra half-mile he gets here won't help him.

Fergal O'Brien, trainer of Poetic Rhythm
He is in good form and was third in a Grade 2 round there at the last meeting and we are hoping he runs well.

FIRST PUBLISHED 6:00PM, JAN 27 2017
It would be better if it was over three miles but he seems to have quite a lot of class as well