Talk of the Tracks DONCASTER FRIDAY

Germany Calling on his way to victory in the Class 3 handicap chase under Graham Watters
Martin Lynch
1 of 1
By David Carr 6:15PM, NOV 25 2016

With many of the top jockeys at the Hennessy meeting, opportunity knocks elsewhere and each of the three richest races on Town Moor went to a 3lb claimer.

In-form Jamie Bargary will be at Newbury on Saturday and warmed up for just his second ride in the Hennessy by landing the novice handicap chase on Deputy Commander for boss Nigel Twiston-Davies.

He was wearing the silks made famous by Cheltenham Gold Cup winner Imperial Commander as he saw off Duke Arcadio by half a length.

"It's lovely to ride a winner in these colours," said the 3lb claimer, who was scoring his fifth victory in the last nine days.

Bargary will be on board Double Ross in the 3m2f Hennessy and said: "It's brilliant to have a ride in a race like that and it's thanks to Nigel Twiston-Davies for putting me up.

"I should get a good spin on Double Ross for two and a half miles and I hope he will be thereabouts at the end."

Killian Moore was delighted to ride his first winner in his new job as he landed the £20,000 2m½f chase on Festive Affair for Jonjo O'Neill.

"I have been with Jonjo since the end of September," said Moore.

"He's a great man to work for and has given me plenty of rides so it's great to ride my first winner for him."

Graham Watters scored the easiest victory of the day as he landed the £20,000 2m3f chase by 15 lengths on front-running Germany Calling.

"When I looked round after jumping three out I couldn't believe how far in front he was," said the jockey.

"He had a good time in front and his jumping is fantastic."

The Unit made history as the first winner of a 2m5f hurdle race at Doncaster as he took the novice event under Tom Bellamy.

Clerk of the course Roderick Duncan said: "Previously we had nothing between two-miles-three and three miles, and this was a joint idea of mine and BHA race planning.

"This is a qualifier for the new staying novice hurdle series and it was felt two miles five would fit better with that."

It was only by a head that The Unit took the race, having looked to be cruising two out, and Bellamy said: "I had a double handful three out and took a pull at the second-last as I didn't want to be in front too soon.

"He made hard work of it but he won and it's the result that counts." 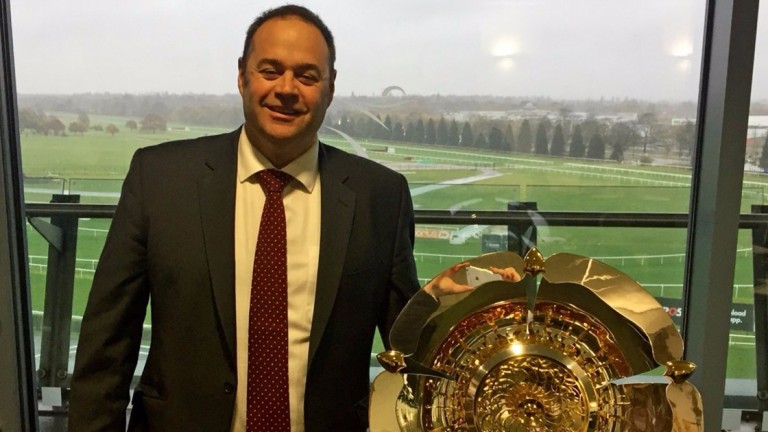 "We want to keep improving facilities and to improve the customer experience," he said. "But we're also keen to look at the fixtures and make sure we're getting the best quality racing here."

Important action taking place elsewhere should not obscure the promise of Lough Derg Leader, who took the 3m hurdle by eight lengths despite being unsuited by the lack of pace.