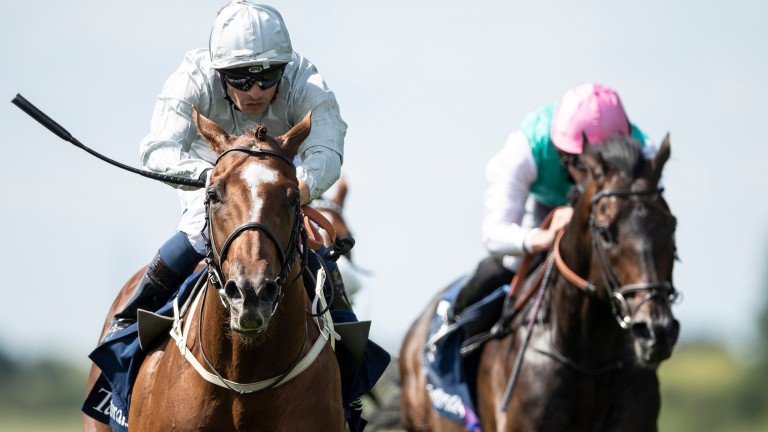 Sheikh Mohammed turned up to the July course expecting to see Masar return to form in the Group 2 Princess Of Wales's Tattersalls Stakes but was upstaged by his son Sheikh Hamdan, whose Communique romped to victory under Silvestre de Sousa.

The packed ladies' day crowd were hoping to hail the return to form of last year's Derby winner, with Masar backed as if defeat was out of the question, but the odds-on favourite trailed home last of the six runners after failing to settle.

Rather than adopt a customary front-running position on the Mark Johnston-trained winner, De Sousa was happy to track Dashing Willoughby and, off a slow pace, was in a good place to strike for home two furlongs out.

The 11-1 chance forged clear out of the Dip to hold the late flourish of Mirage Dancer, who was finishing runner-up in the Group 2 contest for the second year running.

The victory was all the more credible as Communique was shouldering a 3lb penalty for winning the Group 2 Jockey Club Stakes on the neighbouring Rowley Mile in May.

It was a fifth win in the race for Johnston and a first since Universal - the last horse to carry a penalty to success - took the prize in 2013.

"We came here today expecting to win one Tattersalls-sponsored Group 2 but it wasn't this one if I'm honest," said the winning trainer in reference to the earlier odds-on defeat of Visinari in the July Stakes.

He added: "Communique doesn't have to make the running and he enjoyed just bowling along behind the leader. We know he likes the course as he's won on both tracks here.

"He hasn't disappointed us at all this season and the small field and slow pace have suited him today. He's won two at Group 2 level now and hopefully he can crack a Group 1.

"He's had a couple of tries in Group 1 company and come up a little bit short but, on his day, he's that class. There's no doubt about it. There are a couple in Germany that I have in mind for him next."

Mirage Dancer, who was a length and three quarters adrift at the finish, could be plotting a familiar path to Goodwood next to defend his crown in the Group 3 Glorious Stakes.

Trainer Sir Michael Stoute said: "He is a model of consistency and always runs big races. He was always second best today and I think we all knew that. I don’t think he will get any further and I think we'll go back to Goodwood for the race he won last year."

David Simcock is also plotting a similar campaign to last season for third-placed Desert Encounter, who was a further half-length back in third at 25-1 under Harry Bentley.

Simcock said: "His time is August, September and October, which we all know anyway. The ground was no problem - there are no excuses about the ground for him ever. He ran well.

"You’d love to go down the same route as we did last year. What I really want to do is go to Newbury next week, then Windsor, Newbury and Canada. He’s still got it in the tank.

"The Grade 1 Canadian International, which he won last year, is the ultimate plan."

FIRST PUBLISHED 3:49PM, JUL 11 2019
We came here today expecting to win one Tattersalls-sponsored Group 2 but it wasn't this one if I'm honest

One trainer, one jockey, one horse and one race to watch on Saturday Doyle Force: Creative rider off the mark for the week as Appleby bags a 1-2 'He's a horse we like a lot' - Roger Varian could hold key to big-field handicap Mohaafeth bidding for redemption for William Haggas after late Derby withdrawal 'Challenging horse' Kemari solves his trickiness puzzle with impressive success Can one-of-a-kind Jim Bolger pull off more Group 1 heroics with Poetic Flare?