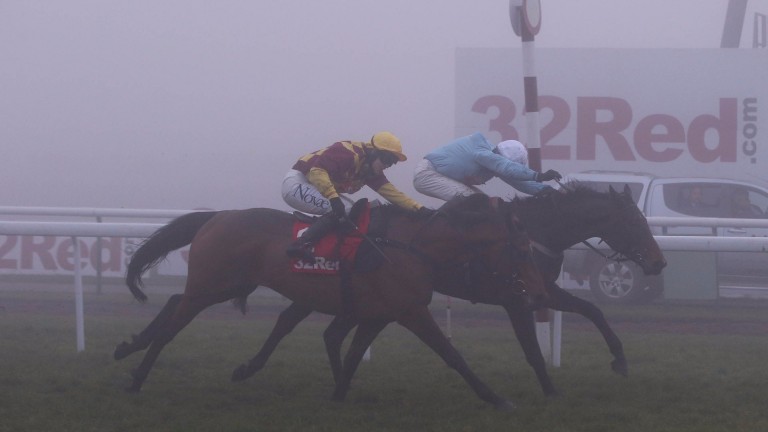 Commentator Stewart Machin believes the Haydock race run in fog so thick that the finishing order became clear only when the riders returned to weigh in should have been abandoned.

Machin was unable to see Clyne finish first in the handicap hurdle as he called the race live on Channel 4 and RUK.

"By the last race conditions were bordering on the farcical, and I'd like to think that if the Haydock officials had their time again they would have called it off," said Machin, who has commentated on plenty of foggy afternoons in nearly 20 years holding a microphone. 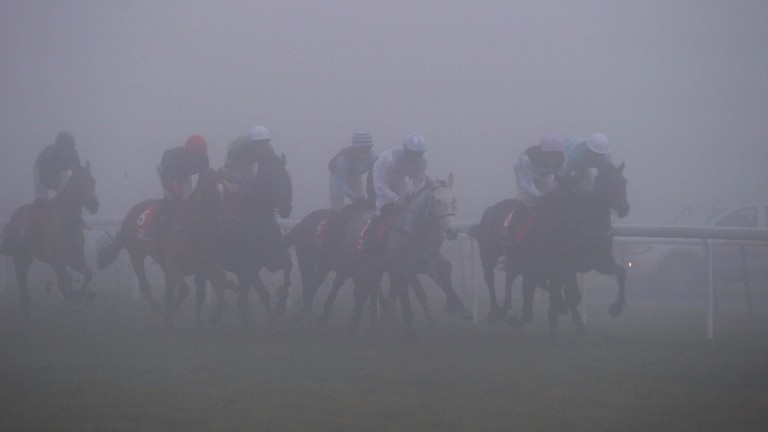 'T'he point of going racing is to see the horses in the flesh, otherwise why bother?,' says reader Ian Walker
GROSSICK RACING PHOTOGRAPHY 0771
"Besides the safety issue, this is sport, and if nobody can see it what is the point of it? I can't envisage any other sport in which they would have carried on in those conditions, and if if it had been football the ref would have called time long before.

"Remember, this was a terrestrially televised race too. It wasn't a great advert for racing."

Machin said he knew from the outset it was going to be a difficult day, although there appeared to be little talk of calling the meeting off.

He said: "It was clear as soon as I arrived that unless there was a massive upturn I wouldn't see much, but after chatting with the cameramen and the raceday director I at least knew where I might be able to see them on my monitor, and how long for." 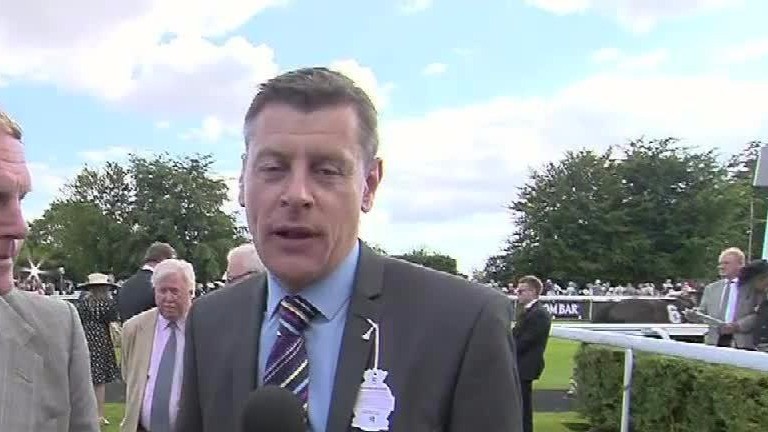 Stewart Machin: 'Did an excellent job under the circumstances'
He added: "It actually lifted halfway through the afternoon but by the time of the Tommy Whittle it had deteriorated markedly, and by the time of the last race it had obviously set in and I couldn't see a thing.

"I was entirely reliant upon what I could see on the monitor. I didn't even see them when they passed under me with a circuit to go – I just heard the hoofbeats. I got a fleeting glimpse between three out and two out, and then at the end of the race the only way I knew it had finished was that there were no more hoofbeats.

"I'd never had a situation before when I haven't had a clue about the result. I hung around to see what would happen in terms of a result being announced, but when there was silence after I stopped talking I knew the judge hadn't seen either.

"I then heard the announcement that the stewards were looking at photographic evidence and determining whether a result could be issued."

Luckily Machin found his car all right in the murk, and just 20 miles down the M6 it was "as clear as a bell".

The BHA will listen to feedback and consider how in future to deal with similar situations .

Besides the race offering no spectacle whatsoever, either for racegoers or for those watching on Channel 4 or other platforms, no official distances could be determined, an issue that provides headaches for spread bettors and handicappers, as well as ordinary punters assessing the form down the line.

The race passed without incident, but winning jockey Adam Wedge said visibility "could not have been much more than 50 yards" and added: "It was only when I saw the wings that I knew a hurdle was coming up."

BHA head of media Robin Mounsey, who underlined that there were no welfare issues and pointed out that the fog came down quickly after the race had started, said: "Ultimately a refereeing decision was made in real time. We will, of course, take on board the feedback from the day and consider what action to take the next time such a situation arises."

He added: "The welfare of horse and rider is paramount and the views of the jockeys were taken throughout the day, including before the last race.

'Confidence in the integrity of the result'

"The judge made it clear he was going to have difficulty calling the result, but there was a stipendiary steward in the medical vehicle following the runners. He positioned himself on the line and was in a position to call the result. The team on course then took their time to clear the result and to make sure there was full confidence in the integrity of the result."

Mounsey added: "We acknowledge there is betting on winning distances and not being able to return this is not ideal, but at the same time if a race can be run fairly we will try to run it.

"The implications of cancelling a race has obvious consequences for trainers, owners, jockeys and stable staff and everyone who has had a bet on the race."

The absence of official distances had obvious implications for spread betting punters who had bought or sold the distances at Haydock.

David Billington, head of racing at Sporting Index, said: "It's such a rare occurrence that we don't have a specific rule to cover such an eventuality, and I don't believe any other spread betting firm does either.

"The most appropriate rule we could find was to treat it as a void race, and in those circumstances we settle as though the winning distance was ten lengths.

"This isn't satisfactory for everyone however, especially as from the little we could see it was less than a length, and so what we have done is to make an ex gratia payment to any client who was affected negatively."

He added: I understand another firm has treated it as though the meeting had been abandoned before the last, which would provide a different outcome for settlement.

"We did what we thought was most appropriate though. We were happy to look after our clients and wear it either way. It wasn't a large number – probably about 20 of them – and it's not the end of the world by any means, although it has cost us money."

From the BHA's operational procedures:

In the event of bad light or fog, the judge, as a minimum requirement, must be able to see the winning post from his box. If this is not the case, the judge must report that fact to the stewards.

The stewards must also be told if it is likely to be too dark to obtain a photograph sufficient to decide a photo-finish or, given the circumstances, poor visibility is likely to affect the judging procedure in any way, including being unable to see the one furlong marker, or the final fence/hurdle as applicable.

In practice, in order to identify the horses as they approach the winning line, it is desirable to be able to see half a furlong down the course. The decision as to whether or not to race, or to continue racing, lies with the stewards.