Wedge and Frost comments show where racing must progress 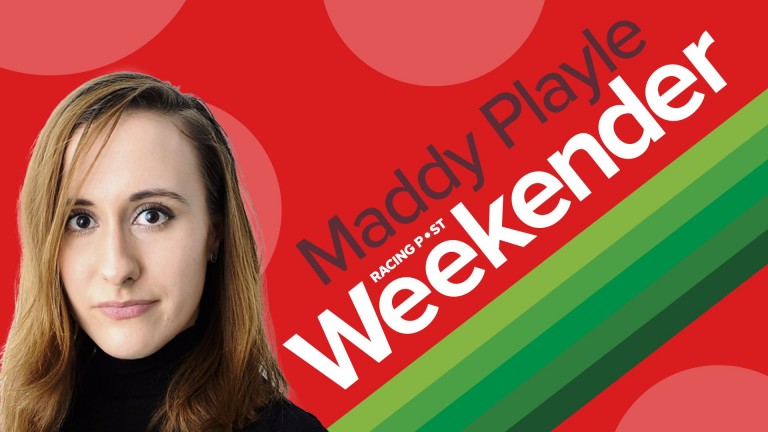 For better or for worse there is always the potential for drama in post-race interviews and on Saturday Adam Wedge caused a stir after winning the Welsh Grand National on Secret Reprieve.

The jockey had endured two shuddering falls earlier in the day and to ITV Racing’s Luke Harvey, who probed him about resilience, he responded “it’s a man’s sport at the end of the day”.

The rider had just ridden the biggest winner of his career on a turbulent afternoon and it’s entirely possible it was nothing more than an unsuitable phrase uttered in the heat of the moment, but those words still made me wince. 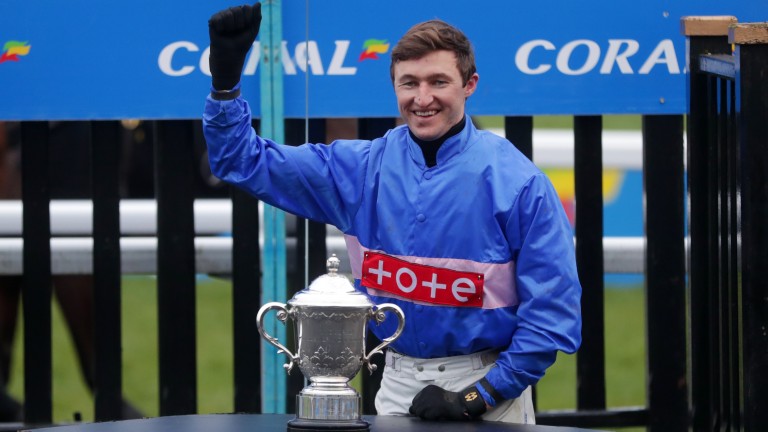 This is not about cancel culture or the ‘woke media’, and – to me at least – his words were unfortunate not unforgivable. Yet disappointingly they weren’t challenged during the interview nor has he addressed them since. For a jockey competing in a male-dominated sport projected on terrestrial television to hundreds of thousands of people, this is not good enough.

On the same day an extract from Ginger McCain’s book My Colourful Life: From Red to Amber circulated on Twitter, including the quotes “I don’t like women in racing”, “I preferred it when you never saw a woman in the weighing room” and “It was a man’s place”.

The entire world, let alone the racing industry, has come a long way in examining sexism since 2005, when the book was published, so to hear Wedge make a not dissimilar comment 16 years later – albeit one uttered off-hand on live TV rather than committed to text – highlights how far we still have to go. 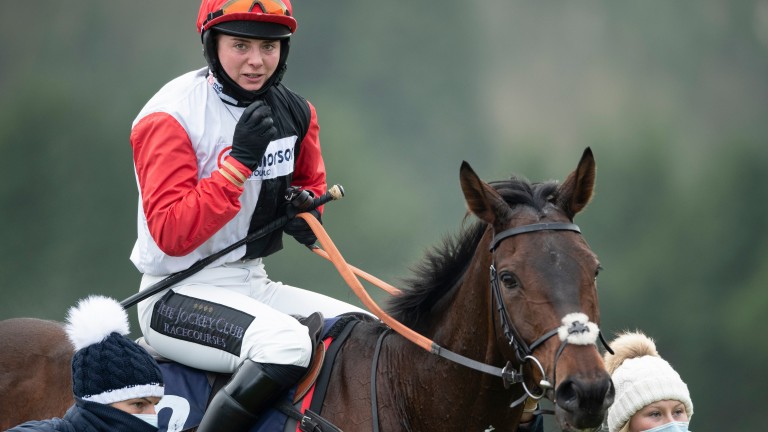 Coincidentally, King George-winning rider Bryony Frost, who has recently alluded to problems in the weighing room and this week revealed there was a BHA investigation into the matter, had earlier completed a double on the same card.

The inner sanctum of the riding community boasts a close-knit culture which has historically been carefully guarded by its participants. Therefore it is with courage Frost has chosen to challenge the jockeys’ omerta and shine a light on the atmosphere within it. It is worrying such action is necessary, but in sharing her experiences she is calling for increased protection for the younger generation, and for that we should be thankful.

However, if it does emerge that the leading female jumps rider in Britain has been bullied by one or more of her colleagues, the story has the potential to cause a huge blow to racing’s image. It would only add to the archaic stereotype that racing is not a sport for all, a view the industry continues to make necessary steps to steer away from.

When she is permitted and prepared to expand, it is Frost – and other women represented across the industry – we should be listening to.

After all, it is not and should not be a man’s sport. It’s everyone’s sport.

Have courage and back Amoola to strike gold

One of this season’s strongest group of handicap form lines will be represented at Warwick on Saturday in the Courage Cup (1.15).

Much of the race will hinge on whether or not Sky Pirate will run – which I think is unlikely – but even if he does it won’t be easy for him to beat Amoola Gold.

The eight-year-old beat Ibleo (now rated 147) off level weights at Ascot in October and pounced late again over the same course and distance a month later, finishing just a neck behind First Flow off 6lb higher. 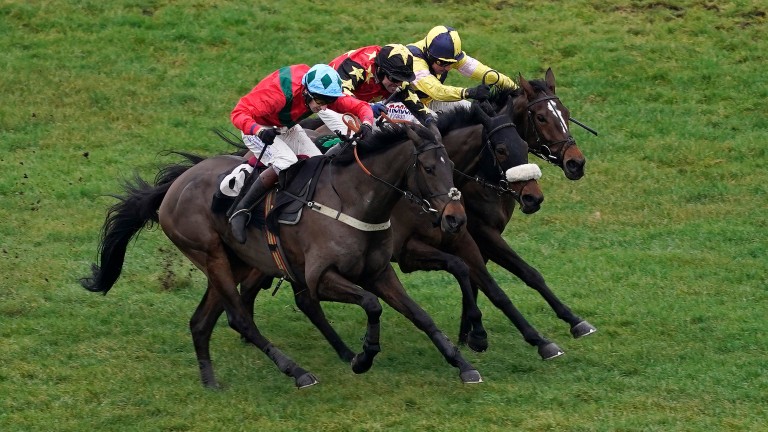 Amoola Gold (right, far side) has red-hot form to his name
Getty Images

He was a long way off the pace in that Hurst Park and produced an excellent finishing kick after the final fence. He may have even won had Bridget Andrews not lost her whip on the run in. First Flow went on to win the Castleford at Wetherby off a mark of 154 (now 156), while the third-placed Capeland was a cosy winner at Wincanton on Saturday off 149.

Amoola Gold is set to race off just 143 at Warwick, a course he has only run at once before when second to Simply The Betts in a novice hurdle and it is likely he has been targeted at this race by local trainer Dan Skelton.

Alan King enjoyed Grade 2 success with Messire Des Obeaux on Saturday and I think he could have another fruitful weekend.

His Jay Bee Why (2.25) won the same novice hurdle (soft) subsequent Cheltenham Festival winner Willoughby Court took en route to winning the Ballymore Leamington Novices’ Hurdle in 2017 and this horse can follow in his footsteps.

Not unfancied for a traditionally hot bumper this time last year, he boiled over in the preliminaries but there was no sign of that when wearing a hood prior to his hurdling debut after a wind operation, when his trainer didn’t think he would be ready.

Nevertheless, he hurdled fluently and stormed home to win by nine and a half lengths. The form hasn’t worked out brilliantly, but even his point-to-point form suggests he is useful. He is worth taking a chance on to be better than the standard setters like Make Me A Believer, Midnight River and Adrimel. 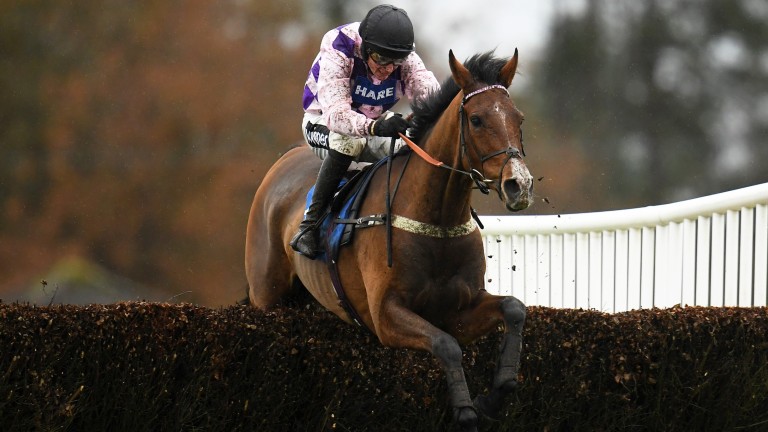 King could also hold the key to the Classic Chase (3.00) with Notachance, one of just a handful of young improvers in the race. He’s only had ten starts and took a considerable step up on his reappearance at Bangor when last seen.

He pricked his ears and idled up the home straight, suggesting this step up in trip is within his compass, but still beat Captain Tommy by three and three-quarter lengths with subsequent Welsh National second The Two Amigos in third. He could still be improving and a 7lb rise is not unassailable given this race doesn’t look particularly deep.

Others to note include the veteran Petite Power who was third last year off a 9lb higher mark, last-time-out course winner Western Climate and the progressive Nearly Perfect, but none have the scope of Notachance.

This is the second time Come On Teddy has featured in this section – Cheltenham on New Year's Day was abandoned – so I'm hopeful he can justify it this time around. I'd be staggered if there wasn't more to come from him off just 134, particularly after On The Blind Side advertised his recent form so well at Kempton last weekend. Given his connections and the fact this is a televised race, I'd be surprised if winning this wasn't the plan before the festival. 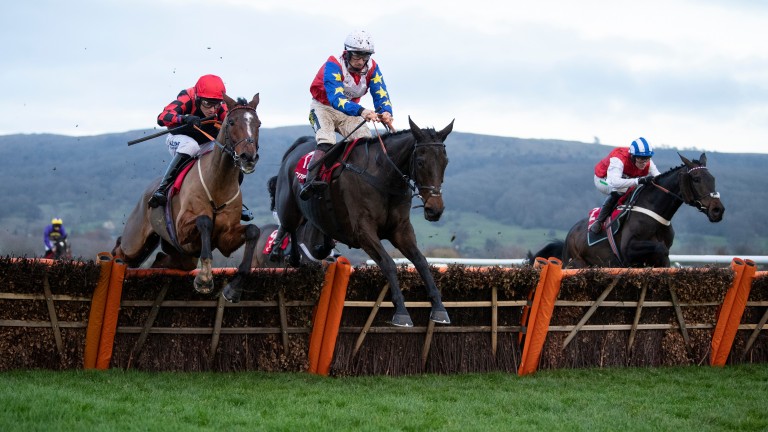 Come On Teddy (white cap, centre) should take all of the beating in the Pertemps qualifier
Edward Whitaker

This is a race which I will be keeping an eye on with regards to handicaps in the future as the likes of Full Back, Dickie Diver and Fado Des Brosses should excel in that sphere. That said, I think Next Destination is vulnerable at the top of the market, especially giving weight away to his rivals. The form of his Grade 2 win at Newbury could hardly have worked out worse and just one favourite has won this race in the last ten years, which was Black Hercules in 2016.

No allowance needed: why a 25-1 shot should be added to your ante-post portfolio

FIRST PUBLISHED 10:00AM, JAN 13 2021
For a jockey competing in a male-dominated sport projected on terrestrial television to hundreds of thousands of people, this is not good enough