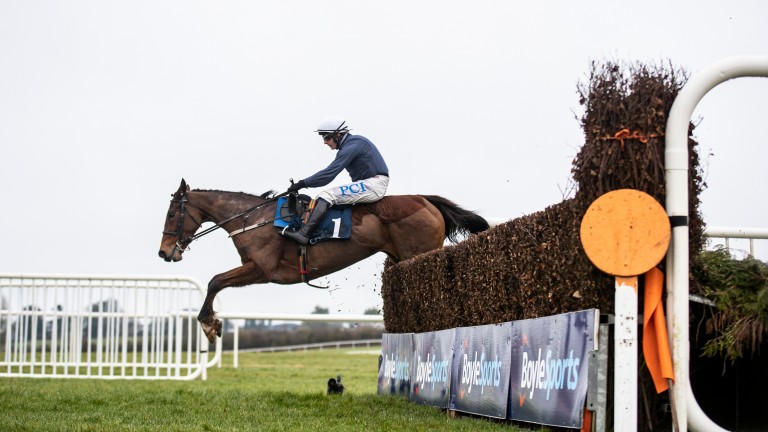 Two-time Grade 1 winner Colreevy extended her unbeaten chasing record to three in Grade 2 company at Thurles on Wednesday and saw her odds contract for the Mrs Paddy Power Mares' Chase, but a trip to the Cheltenham Festival is not guaranteed as connections consider a Grade 2 option at Limerick in the spring.

The Willie Mullins-trained eight-year-old was handed a pretty straightforward task in the mares' novice chase and ran out a comfortable 12-length winner from Mount Ida, with her challenge made easier by the fall of Scarlet And Dove at the second-last.

Already a gritty winner of a Grade 1 novice chase at Limerick over Christmas, she is now as short as 3-1 and has displaced stablemate Benie Des Dieux as favourite for Cheltenham's new race on Gold Cup day.

"She jumps very well and takes it all in her stride," said Mullins. "Paul was very happy with her, how she did everything for him – there's no fuss about her."

He added: "There's a mares' race at Limerick [Grade 2 Dawn Run Mares' Novice Chase on 14 March] and that's sort of what we're looking at. Whether she has higher expectations or not, I don't know.

"We'll have to chat with the owners but I think they were hoping we'd come here today and maybe go on to Limerick, but maybe after doing what she did here we might revise plans. We'll see.

"Whether she has enough experience to go and run over there [Cheltenham] is another day's work but certainly what she did at Limerick, and here, would lead you to think she might have as good a chance as anything over there. I think connections were favouring Limerick but it's open for debate."

Torygraph toughs it out

There was plenty to like about the strong-staying performance of Gigginstown House Stud's Torygraph in the 2m7f novice hurdle, and he advertised his potential to develop into an Albert Bartlett Novices' Hurdle contender for Gordon Elliott.

The laid-back six-year-old, a 16-1 chance for the Albert Bartlett with Ladbrokes, will need to improve another notch or two but he was able to supplement his previous Fairyhouse success with a game performance.

Winning rider Jack Kennedy said: "He's a lovely horse and he's improved since Fairyhouse. He's a lazy type and needs to be kept up to his work but at the business end he does his best work.

"He's not your typical big staying horse to look at but he's definitely most effective over a longer trip."

Aubrey McMahon enjoyed his first success over hurdles when guiding the Willie Mullins-trained Eurotiep to victory in the maiden hurdle, scoring readily by 19 lengths in testing conditions.

The victory continues a red-hot run for the champion trainer, who has now won eight of the last nine races in which he has had runners – an alarming statistic for his Thyestes Chase rivals at Gowran on Thursday.

FIRST PUBLISHED 6:05PM, JAN 27 2021
I think they were hoping we'd come here today and maybe go on to Limerck, but maybe after doing what she did here we might revise plans. We'll see

'It's incredible to think I've won it twice' - can Patrick Mullins do it again? Hopes high of strong European team for Spring Carnival despite veterinary checks Plucked from obscurity, The Shunter could now add Galway Plate glory to his haul Take a sip of Ballybrit Lite, it won't taste the same but you might like it Finally! Excelcius produces excellent display to record only his second victory