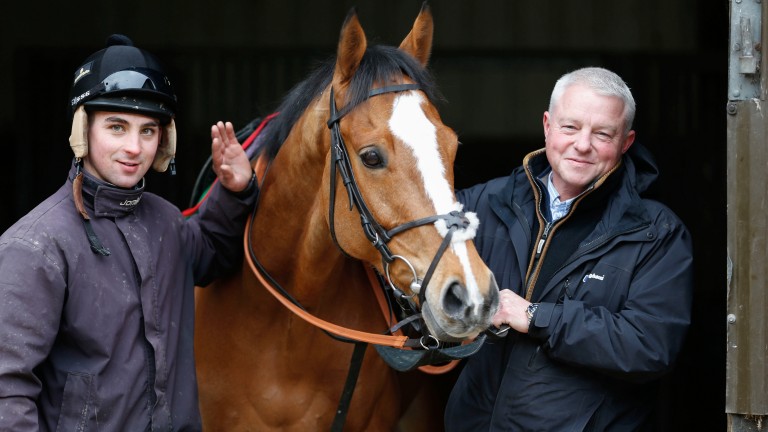 Jockey Joe Colliver is focusing all his attention on Sam Spinner as he bids for a first Cheltenham Festival success in the Sun Racing Stayers’ Hurdle this afternoon.

Colliver and his partner were big news heading into last year’s festival, with Sam Spinner propelling him into the big time after the jockey served three months of a ten-month prison sentence in 2016 for crashing his car when drink-driving.

Sam Spinner ultimately disappointed as favourite when finishing fifth 12 months ago and has so far this season failed to rediscover his form from last season, when he landed the Grade 1 Long Walk Hurdle at Ascot.

Colliver has not had the ideal build-up to Cheltenham and had been due to appear at Harrogate Magistrates Court on Thursday on a fresh drink-driving charge, before arranging to have the date of the hearing changed so he can renew his association with Sam Spinner.

“I’m going to Cheltenham tomorrow to ride Sam Spinner and that’s all I’m concentrating on,” said the rider on Wednesday. “That’s my focus and after that I can move on and sort things out.”

After unseating Colliver twice, the Jedd O'Keeffe-trained Sam Spinner completed in fourth behind Stayers’ Hurdle favourite Paisely Park in the Cleeve Hurdle last time and his big-race rider is confident he is coming back to his best.

“I know the season hasn’t gone to plan but he’s definitely come on for his last run at Cheltenham,” said the jockey. “I felt like he needed it plenty enough and he's come on for the run – he’s in top form at home.

“I schooled him last Friday and I gave him a little bit of work on Tuesday, and I couldn’t be happier with him. Jedd and the team have him in prime condition at the right time.

"The key to Sam Spinner is soft ground and I can’t wait. I’d like to think we could get closer to Paisley Park being match-fit.”

O’Keeffe too thinks the horse is back near his best and is delighted to have Colliver in the saddle once again.

“To be fair, until there’s been a magistrates hearing and the all the facts come out, I don’t think it’s right to judge,” said the trainer.

“I was keen to stick with Joe and the horse’s owners were the same - they have a very good partnership and know each other very well.”

Sam Spinner is a general 40-1 outsider for the feature race on day three of the festival, with Paisley Park heading the market at 15-8.

FIRST PUBLISHED 9:15AM, MAR 14 2019
The key to Sam Spinner is soft ground and they?re meant to get rain so I can?t wait. I?d like to think we could get closer to Paisley Park