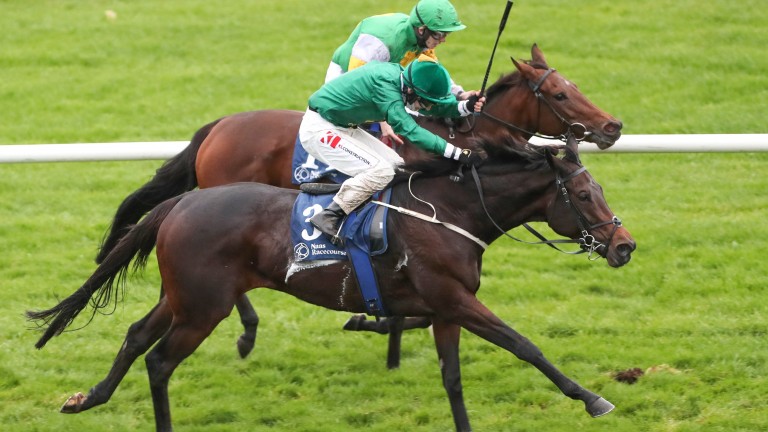 With Colin Keane comfortably fulfilling his quest to be crowned champion jockey for a third time long before being presented with his prize at Naas, one would have been forgiven for thinking the meeting would serve as some nondescript victory procession.

However, as darkness descended Keane shone brighter than ever to produce a moment of magic in landing the feature November Handicap on Yaxeni before completing a double on the aptly-named Team Of Firsts, both trained by Ger Lyons.

Yaxeni was returned a 33-1 winner but would have traded considerably longer when Powerful Aggie overtook her with a furlong to run.

But the leader didn't do much when she got to the front and Keane summoned a renewed effort from Yaxeni to get back up.

Not even on the biggest of jumping days would Naas see crowds cheering in winners as loudly as Keane was welcomed back after his winning ride.

"The second quickened by me well but she didn’t do a whole pile when she got there and gave my filly a second chance," he said.

"She's been running in stakes races since winning her maiden and, not to belittle the race, but it’s the weakest one she’s run in for a long time.

"She loves the trip and that ground. She'll be a nice mare for next year, although we might have to travel a bit with her."

Keane completed his double in the finale on Team Of Firsts and was met with another hero's welcome, taking his total for the season to a record 141 winners.

It was also fitting for Dylan Browne McMonagle, crowned champion apprentice, to get in on the act when winning on Noel Meade's Joe Masseria in the 7f maiden.

He said: “It's been an unbelievable year, what dreams are made of. To ride so many winners in the year has been amazing.

"I'm looking forward to next year already and I hope it's as good. I owe a massive thanks to everyone who has helped and given me opportunities. It wouldn't be possible without them.”