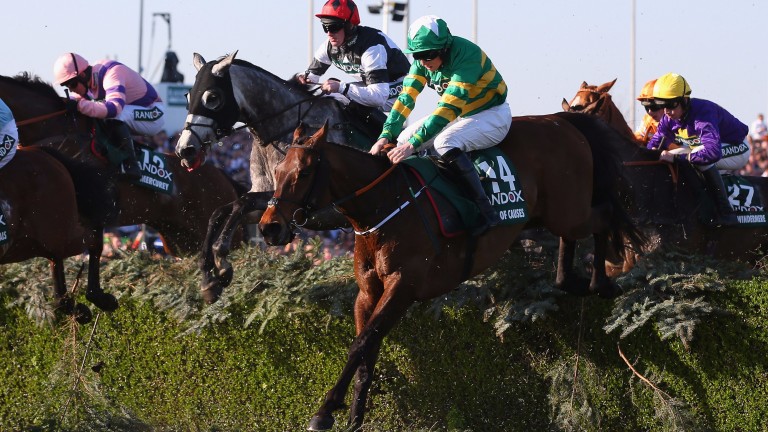 Cause Of Causes clears the water on his way to finishing second in the National
Alex Livesey
1 of 1
By Graham Dench 5:52PM, APR 10 2017

Triple Cheltenham Festival winner Cause Of Causes gave Jamie Codd another fantastic ride but found One For Arthur too strong up the long run-in.

He was beaten four and a half lengths into second, but Codd, who would have been the first amateur winner since Marcus Armytage on Mr Frisk in 1990, could not have been more proud of the nine-year-old.

"I had a brilliant ride," he said.

"He's not an over-big horse and he's jumped really well. I thought for a couple of strides at the back of the last I had a chance, but the winner has picked up. My lad doesn't owe us anything, though. He's been second in a National and has three Festival wins."

Tom George's Saint Are, second in 2015, finished best of all, but had to settle for third.

Davy Russell, enjoying his best ever finish in the race, reported the 11-year-old "just hit a flat spot", and added: "I couldn't go with them from the back of Becher's and just hoped he would pass tired horses.

"I didn't think at any stage he would win it, but I was riding for my best possible position and I think I achieved that. He was never on the bridle. I was shoving and shoving the whole way."

When well backed 8-1 favourite Blaklion went clear three out many, including trainer Nigel Twiston-Davies, thought the race might be over, but last year's RSA Chase winner ran out of gas and lost third close home.

Twiston-Davies had to fight his way into the winner's enclosure for the presentations and said he thought he was going to be strip searched for entry so tight was security.

"He took to it brilliantly and jumped lovely," he said.

"Everything was great and three out we thought we'd won, but it was just too far. He was cantering. Noel [Fehily] had to go when he did. Everything went superbly but we just didn't win."

Fehily said: "I had a great ride, but he just tied up a little from two out."

Gas Line Boy ran a storming race for Ian Williams and jockey Robbie Dunne in fifth, while Vieux Lion Rouge gave his backers a great run for their money before fading late on, just as he had done 12 months ago.

He finished a place closer in sixth, and Tom Scudamore said: "I got a great run, but the petrol just emptied."

Among the hardest of hard-luck stories was Definitly Red, 10lb well in and a popular choice with many following his Doncaster defeat of The Last Samuri.

The eight-year-old was badly hampered at Becher's first time round and Danny Cook had no choice but to pull him up two fences later.

"The tack slipped round his belly and there was nothing I could do from there unfortunately," Cook revealed.

"He was jumping well and had got into a nice rhythm. I definitely thought I was going to have a good spin round as he took to the fences so well, but it's just one of those things."

FIRST PUBLISHED 7:34PM, APR 8 2017
I thought for a couple of strides at the back of the last I had a chance, but the winner has picked up