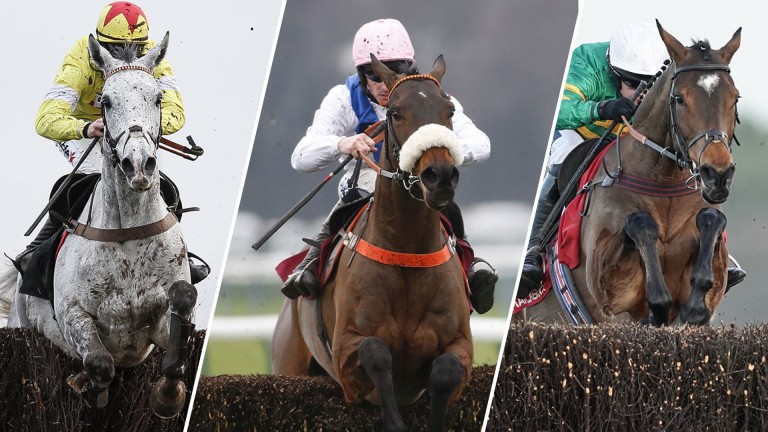 Cobden glad to be back on Politologue

Harry Cobden can’t wait to get back on board Politologue, who thrust him into the limelight as a teenager when landing the 2017 Tingle Creek Chase at Sandown.

Paul Nicholls’ stable jockey has ridden him only four times since, but takes over from Harry Skelton and has high hopes of resuming their successful partnership.

“Politologue is a legend of a horse,” Cobden says. “He’s one of those who got me going, and I enjoyed one of my biggest successes early on aboard him in the Tingle Creek. I was only 19 back then. He’s one of the horses who got me noticed on the big stage.

“It was also a bold shout from Paul [Nicholls] to let me ride him in a novice chase at Haydock a year earlier. I was still claiming 3lb back then.”

Since Cobden last partnered Politologue on the racecourse – when finishing only fifth behind Defi Du Seuil in the 2019 Tingle Creek, with Waiting Patiently third – the ten-year-old has put together two of the best performances of his career.

An impressive nine-and-a-half-length winner of the Champion Chase at Cheltenham in March, Politologue made a sparkling reappearance at Sandown last month to slam the Cobden-ridden Greaneteen by seven lengths in the Tingle Creek.

“Paul has changed the way he trains him, and Politologue looks in the form of his life,” Cobden said. “According to the ratings he’s never been better, and I’m delighted to be back on him at Ascot. He was very good in the Tingle Creek, and has a decent record around Ascot. Course form always helps in these big races.

“It’s a good, competitive race, but the aim will be to go out and make a good, even gallop and get into a nice rhythm up front. Waiting Patiently and Defi Du Seuil are the dangers. Waiting Patiently travels so well I don’t think the drop back to two miles will be against him.

“They’re both good horses, but I certainly wouldn’t swap Politologue for anything else.”

Waiting Patiently may leave it late

Race tactics may not yet be finalised but few will be surprised if champion jockey Brian Hughes elects to produce Waiting Patiently fast and late in a bid to reel in likely leader Politologue.

The ten-year-old seems remarkably versatile trip-wise, and drops back to 2m1f after staying on nicely from off the pace to finish second to Frodon over three miles in the King George VI Chase at Kempton.

The winner of seven of his 14 races, Waiting Patiently enjoyed perhaps his greatest hour over 2m5f at Ascot when beating Cue Card by two and three-quarter lengths in the Grade 1 Ascot Chase almost three years ago. 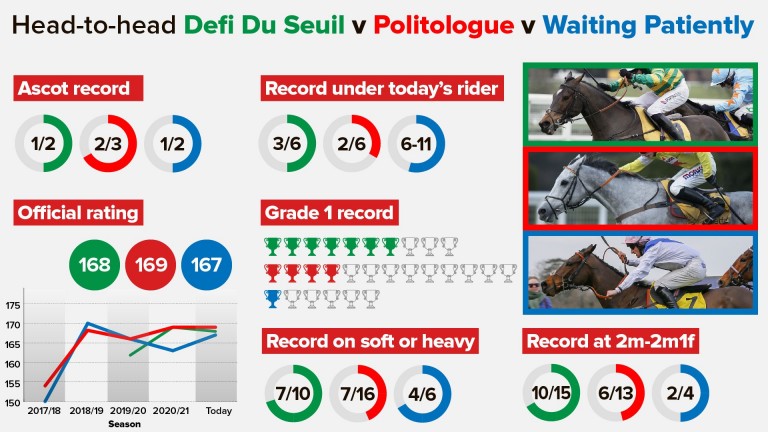 Trainer Ruth Jefferson said: “We’ll decide on Saturday exactly what the tactics will be. I don’t think he’ll be dropped out, and he won’t be making it either. It will be somewhere in between.”

Jefferson and owner Richard Collins decided at the beginning of the week to supplement Waiting Patiently for the Grade 1.

“He’s so fresh, well and happy in himself we just had to give it a go,” Jefferson said. “He came out of the King George so well that he only had two days off because he was going to hurt someone if I didn’t ride him out.”

Waiting Patiently and Politologue are old rivals, and Jefferson believes there are similarities between the two chasers.

“Politologue is in a better place than he’s ever been and is happy front-running over two miles. Waiting Patiently has a high cruising speed and a good turn of foot.

“It promises to be a cracking race, and you’re going to need that combination of speed and stamina he has. We’re all looking forward to it.”

However, it should not be forgotten Defi Du Seuil, a general 9-2 shot with the bookmakers, went into the Champion Chase last March as 2-5 favourite in his attempt to be crowned the leading two-miler of the 2019-20 season.

Three straight wins, including in the Clarence House 12 months ago, put him in pole position to achieve that feat, but he flopped at Cheltenham and then disappointed again on his seasonal reappearance in the Shloer Chase in November when pulled up behind Put The Kettle On.

“Nothing came to light after the Shloer, but he seems in very good form now,” said trainer Philip Hobbs, who is adamant his stable star retains his ability. “He seems fine so that’s why we’re running.”

The ground was very testing when Defi Du Seuil beat Un De Sceaux by two and three-quarter lengths at Ascot last January, and he will encounter similar underfoot conditions this time.

Despite the two lapses, Defi Du Seuil still boasts a strike-rate of 14 wins from 22 career starts and retains a large fan club.

If the Defi Du Seuil who had both Waiting Patiently and Politologue toiling in his wake when landing the 2019 Tingle Creek Chase reappears tomorrow, odds of 9-2 could be made to look very big indeed.

Politologue and Waiting Patiently are poised to renew a long-standing rivalry in Saturday's Clarence House, one that began four years ago to the very day, writes Andrew Dietz.

The Grade 2 novice chase at Haydock, due to open the day's other big fixture pending an inspection, was the first time the high-class pair clashed, with Waiting Patiently – then trained by Ruth Jefferson's late father Malcolm – getting the better of a prolonged duel in the home straight.

Both horses had gone into that 2017 contest unbeaten in two starts over fences and Waiting Patiently's length-and-a-quarter success proved to be the dawning of a new chasing star.

While there is a sense of what might have been with Waiting Patiently having run only eight times since, Politologue has earned a reputation as the most reliable of top-class chasers by winning eight of his 18 runs during the same period.

In head-to-heads, Waiting Patiently has Politologue's measure (3-2), but the market favours Politologue, who seeks a Grade 1 hat-trick after victories in the Champion Chase and Tingle Creek.

Paul Nicholls, trainer of Duc Des Genievres
He's got it all to do on form. The more it dries out the better for him.

Venetia Williams, trainer of Fanion D’Estruval
He’s rather been thrown in at the deep end.

Kim Bailey, trainer of First Flow
His task is very daunting and I'd have actually liked softer ground. Going right-handed is a plus and he's always gone well at Ascot. This is his Champion Chase/Gold Cup and if he's ever going to win a Grade 1 it'll be here because he has lots in his favour, but I'd prefer to have heavier ground.

1.15 Ascot: Roksana standing in the way of Magic Of Light's hat-trick bid

2.15 Taunton: 'It's the perfect race for him' – Paul Nicholls eyeing repeat win for Yala Enki

2.40 Haydock: can Royale Pagaille defy top weight and prove a Grade 1 horse in a handicap?

3.00 Ascot: Dashel Drasher might struggle to dominate with front-runners aplenty

FIRST PUBLISHED 6:00PM, JAN 22 2021
Paul has changed the way he trains him, and Politologue looks in the form of his life