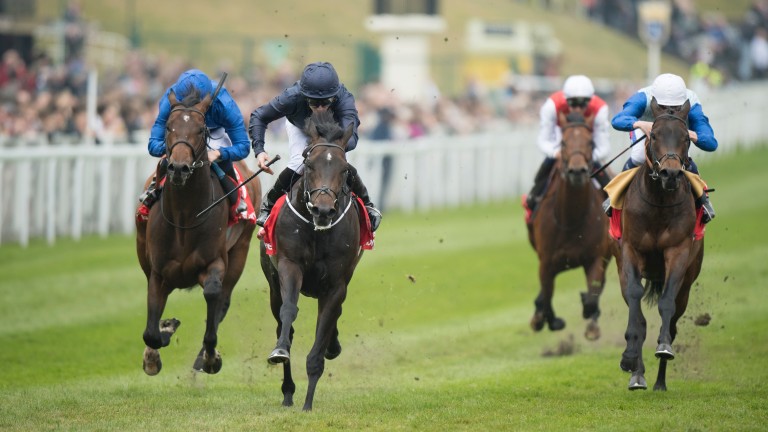 The race, set to be one of the most anticipated anywhere in the world this year thanks to Winx's bid for a historic third victory in a row, attracted a total of 141 entries, down from 157 a year ago, which included 22 international hopefuls.

Among this year's 15 are six from Aidan O'Brien, with Cliffs Of Moher joined by veteran Highland Reel, third behind Winx in 2015, as well as fellow three-year-old Lancaster Bomber and Deauville. O'Brien won the race in 2014 with the three-year-old Adelaide.

Charlie Appleby enjoyed a sensational Melbourne Spring Carnival in 2016 and his Caulfield Cup runner-up Scottish is also entered, along with stablemate Folkswood, a Group 1 second at Meydan earlier this year.

Godolphin could also be represented by Saeed Bin Suroor's Best Solution and Prize Money, while David Simcock has handed Lightning Spear an entry.

Willie Mullins has last week's Galway scorer Riven Light in the mix, while Jane Chapple-Hyam may have a shot with Kaspersky and Tom Dascombe has entered Teodoro.

Japan's sole representative is Noerealism, with France not represented this year.

"It is pleasing to see a number of internationals come through and the best of local talent nominated to take on the challenge that is Winx," said Moonee Valley Racing Club chief executive Michael Browell.

"Last year's race was rated 124.75, the equal-second highest race in the world and best race on turf at the 2016 Longines World's Best Horse Race Awards and we’re aiming to reach that number one spot in 2017."

Leading the home defence is Winx, with old rival Hartnell also engaged, along with Melbourne Cup hero Almandin and fellow Lloyd Williams-owned spring hopeful Aloft, who was a winner at Flemington at the weekend.

Steel Of Madrid, who got the better of Folkswood in the Earl Of Sefton Stakes at Newmarket back in April for Richard Hannon, appears among the entries for his new Australian trainer Tony McEvoy.

Meanwhile on Tuesday, Winx's build-up to that date with destiny on October 28 continued with a second barrier trial of her campaign at Randwick.

The superstar mare had never won a barrier trial before but did so with ease this time, albeit the significance of doing so is minimal.

Trainer Chris Waller is now eyeing the Warwick Stakes over seven furlongs at the same course a week on Saturday and said: "She's probably doing a little bit too well at this stage of her preparation so needed a bit of a stronger hit-out.

"With today's trial I think she's right on trial for her first-up run and condition wise, this should just tighten her up a bit more."

Jockey Hugh Bowman added: "We've been a lot quieter with her at home leading into the trial this time, so this was probably her biggest hit-out this prep and it should prepare her nicely.

"She's never as enthusiastic in her trials so the fact she didn't hit the line like she does in her races didn't concern me one iota and the fact she has won her first trial is meaningless too, it's just a preparation leading up to her first-up run."

FIRST PUBLISHED 11:56AM, AUG 8 2017
It is pleasing to see a number of internationals come through and the best of local talent nominated to take on the challenge that is Winx