Godolphin favourite Frontiersman was ruled out late on Friday night 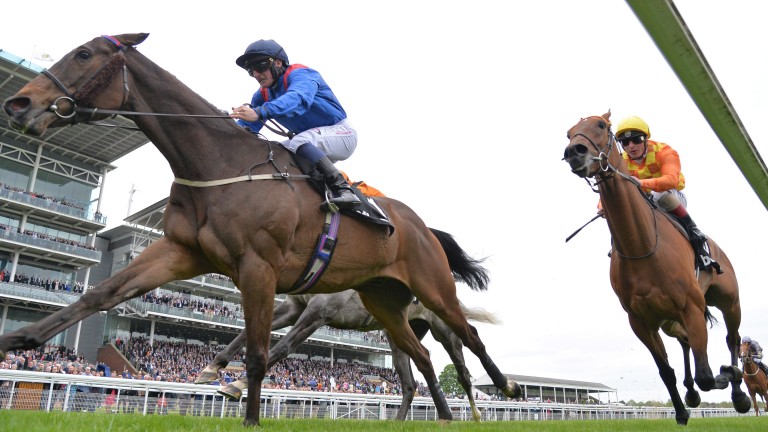 The admirable Clever Cookie is out to win this for the third time after victories in 2014 (dead-heat) and 2015.

He had bigger fish to fry this time last year as having won the Yorkshire Cup he was being prepared for a crack at the Gold Cup, missing out on a bid for three consecutive wins.

However, connections have the three-timer in their sights this year, though it won't be easy as this looks a grand Grand Cup – one that could have some ramifications for the Gold Cup – while several of these are engaged in the Northumberland Plate.

Frontiersman, who was due to step out of handicap company and up in trip, was declared a non-runner late on Friday.

Ralph Beckett and Fran Berry teamed up to win this 12 months ago with Moonrise Landing and are back with the improving Alyssa.

William Haggas, trainer of Dal Harraild
We're trying a longer trip and he's always shaped as if he'd get it, and he likes top of the ground. It looks competitive and he has a penalty but he still should run a good race.

Peter Niven, trainer of Clever Cookie
He's won the race twice before but that was when this came a week later than it does this year and it just depends how he goes only eight days after running in the Yorkshire Cup. He didn't have a hard race that day and seems well enough; he just needs good ground, not firm.

David Simcock, trainer of Curbyourenthusiasm and Goldmember
Curbyourenthusiasm had an uninspiring trip to Dubai and this is his first start since. He should like the track and trip. Goldmember had a little wind operation over the winter and is now fine. I'm hopeful he can run a nice race.

Marco Botti, trainer of Dylan Mouth
He ran respectably at Chelmsford last time and the trip will suit, and also he has a good draw. There aren't that many races for him but he likes going left-handed so we'll take a chance in a competitive race.

Pat Shanahan, trainer of The Tartan Spartan
I'm very pleased with him. He's stepping up in class from his handicap win at Salisbury and the ground and trip will suit. We're looking forward to see how he measures up.

FIRST PUBLISHED 6:00PM, MAY 26 2017
It looks competitive and he has a penalty but he still should run a good race