Clerk's Choice trainer Michael Banks dies at the age of 78

Permit-holder Michael Banks, best known for his handling of Clerk's Choice, who was a fine sixth to Hurricane Fly in the 2011 Champion Hurdle, has died at the age of 78.

Banks, based at Manor Farm, Waresley, near Sandy in Bedfordshire, was steeped in racing and point-to-pointing and his father Sidney trained and owned Lucky Purchase, winner of the Foxhunter at the 1947 Cheltenham Festival.

He emulated his father, whom Huntingdon's most important hurdle race is named after, by becoming the track's chairman, having been a steward and director there.

The successful farmer also officiated at other courses, notably Warwick, where – like at Huntingdon – he was chairman of stewards, in a 31-year term for the various governing bodies of British racing.

Made an OBE in 1996 for services to agriculture, Banks was also elected as a member of the Jockey Club in 2005.

His best horse was Clerk's Choice, who began his career on the Flat with Newmarket trainer William Jarvis, before developing into a smart hurdler for his owner, winning four times and being beaten only 11½ lengths as a 50-1 shot behind Hurricane Fly at Cheltenham. 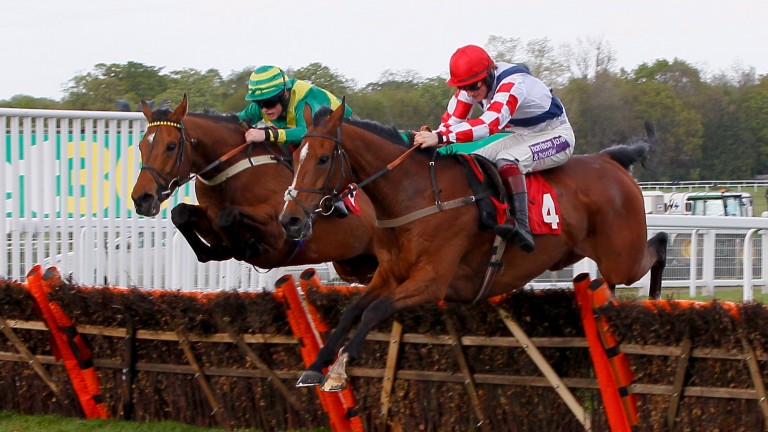 Clerk's Choice (left), a smart hurdler in Michael Banks's well-known colours
Mark Cranham
Jarvis, who looked after Banks's Flat horses, said on Monday: "He was an extremely good and well-respected steward. He was a really sound steward who took no nonsense, but common sense prevailed in those days when stewards could get it wrong! He was disappointed when he got to the age of 70 and had to retire as he felt, and I would concur, that he had an awful lot to offer.


"He was a selfless man and gave up an awful lot of time for the sport and industry. He was a keen point-to-point man and was a thoroughly decent fellow and friend and a nice guy to train for, while he was a very good family man. I respected his opinion enormously and know he was very honoured to be made a member of the Jockey Club. It was a hobby for him training as a permit holder. He was very professional how he did it, but it wasn't his main line of business, which was as a grain merchant and farmer and he was very successful at that.

"He was passionate about National Hunt racing, which was his primary love, but he followed the Flat and got a lot of pleasure out of that as well."

Banks, who trained a steady flow of winners under rules and had his last runner when Jodies Jem fell at Worcester in July, is survived by wife Rosalind and daughters Melanie and Nicola.

A memorial service will be held at The Great Grandsen Church near Waresley on Tuesday, December 5 at noon.

FIRST PUBLISHED 3:24PM, NOV 13 2017
He was a selfless man and gave up a hell of a lot of time for the sport and industry