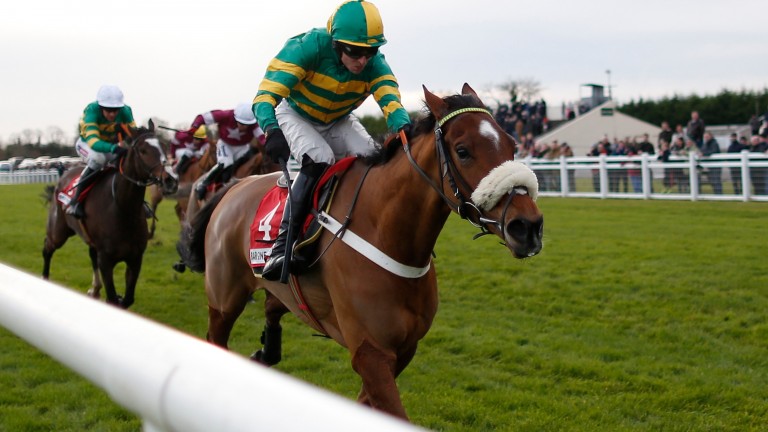 Sport is full of anticipation. Waiting for events, waiting to watch stars, waiting for horses.

It hasn't been a long wait to see Coney Island run again after winning a novice chase at Fairyhouse early this month in a style suggesting that Eddie Harty's five-year-old could become a star. He runs in Thursday's Grade 1 Neville Hotels Novice Chase at Leopardstown (1.55).

Coney Island developed into a high class novice hurdler last season and the qualities he displayed at Fairyhouse indicate even better to come over fences.

Harty is an accomplished trainer, best known for his handling of Captain Cee Bee, and a realistic one. His post-race reaction told us that the dream that Coney Island may one day become a Cheltenham Gold Cup horse is believable.

At Fairyhouse, Coney Island travelled well and jumped even better - confident, assured, accurate and athletic. He didn't make a mistake and approaching the second last was on the bridle and moving powerfully before taking control.

It was an impressive display and although J P McManus's sole representative - Gigginstown House Stud fields four - has no easy task he will be fine over the longer, three mile trip. It would be great to see Coney Island move into the ranks of the sport's stars. Fingers crossed (what's that all about?).

John Saville has had a much longer wait since buying the $2.5 million Treaty Of Rome. Saville, a Hong Kong-based supplier of toys and valued member of Sean Magee's annual group trip to Sedgefield, didn't pay $2.5 million himself.

That was what Michael Magnier paid for Treaty Of Rome as a yearling at Keeneland in 2013. Two years later Saville paid 3,000 guineas for the same horse.

I have my doubts about the merit of buying once expensive yearlings now cheaply available but I'll be rooting for Treaty Of Rome. Fingers crossed.

Before I forget, don't forget to see how that all-weather veteran Stand Guard fares in the 12-year-old's attempt to win for the 28th time, every time on the all-weather. Rated 89 in his prime, Stand Guard carries a 6lb penalty for winning his latest race off a mark of 54 at Kempton nine days ago. Fingers crossed.

Go on Coney Island, go on Treaty Of Rome and go on Stand Guard!