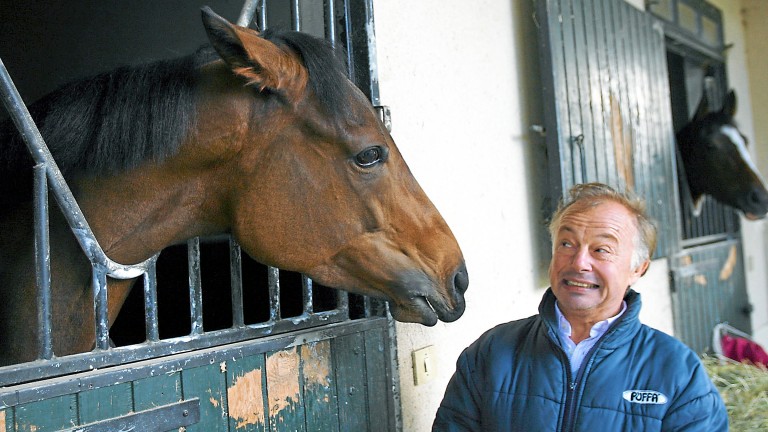 Freddy Head, seen here with the feisty Goldikova, is the only horseman to feature as both trainer and jockey
DAN ABRAHAM
1 of 1
By Katherine Fidler 3:15PM, JAN 28 2017

1 The Arc is thought of by many as the best race in the world, and it proved a key factor in the Queens of the Turf countdown with seven of the 50 having won Longchamp’s flagship race, including last year’s winner Found, number 27 on the list, dual scorer Treve (9), Urban Sea (46) and the undefeated Zarkava (12).

2 The Aga Khan’s Zarkava is one of four fillies and mares on the countdown with unblemished records. US star Personal Ensign (23) and Aussie legend Black Caviar (10) also retired from racing with a 100 per cent strike-rate, but queen of the queens by those measures is Kincsem (26), the Hungarian heroine who won all of her 54 starts across Europe, including the Goodwood Cup.

5 Unsurprisingly, Willie Mullins trained 40 per cent of the jumpers on the list, six-time Cheltenham heroine Quevega and Annie Power, who it was announced this week will be unable to defend her Champion Hurdle crown in March.

6 When it comes to having an affinity with fillies, there has been no-one better than the late Sir Henry Cecil, who tops the trainers’ list with three entrants in the top 50. Indian Skimmer (21), Oh So Sharp and Bosra Sham (18) – all three were Classic winners. Seven trainers – Aidan O’Brien, Clive Brittain, Dick Hern, Ed Dunlop, John Dunlop, Patrick Biancone and Willie Mullins – trained two ladies on the list.

7 It’s a tie at the top for leading jockey, with Steve Cauthen and Willie Carson both main jockeys on no fewer than five Queens of the Turf. Carson, whose quintet include Royal Leger winner Dunfermline (31) and Sun Princess (25), shared piloting duties with Frankie Dettori on board the wayward Lochsong (39). Dettori is second on the list with four fillies in the top 50, with Lester Piggott in third with three. Freddy Head is the only name to feature in both the trainer and jockeys’ list courtesy of Miesque (4) and Goldikova (6).

8 Piggott’s trio of Petite Etoile, Park Top (32) and Dahlia (15), were all primarily middle-distance performers, by far the most common trip preference among the 50. A forte for 1m2f to 1m4f is prevalent in 28 of the 50, with another six mixing it at both a mile and middle-distances with ease. Of the straight milers, two secured top ten slots – French queens Goldikova and Miesque. From five Leger winners, none could be described as exclusively stayers, while Makybe Diva (34) interspersed her three Melbourne Cup wins with sprint victories over seven furlongs. Now that’s versatility.

10 Galileo is now firmly planted at the top of the sires’ championship year after year, but in our countdown he has had to settle for shared honours. The Coolmore supremo is sire of Found and Minding, with Storm Bird (Balanchine and Indian Skimmer) and (Winx (28) and Zenyatta (17)) also siring a pair of queens.