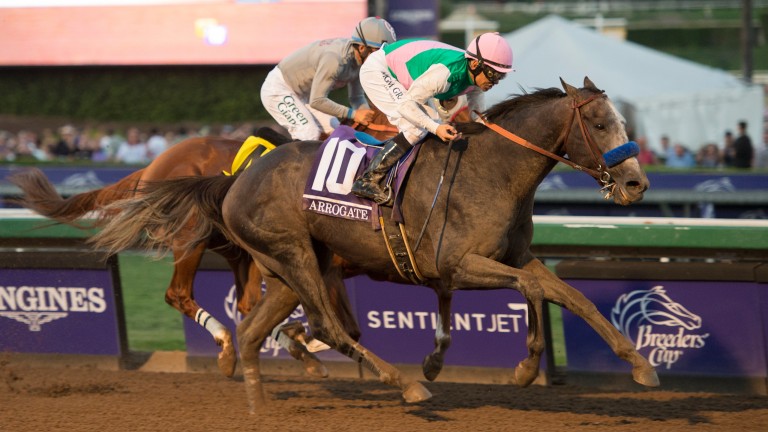 Arrogate: runs on Sunday in the San Pasqual Stakes at Santa Anita
Edward whitaker
1 of 1
By Nicholas Godfrey 1:47PM, DEC 28 2016

Breeders′ Cup Classic winner Arrogate is set to run on Sunday in the San Pasqual Stakes at Santa Anita as a prep run for his rematch with California Chrome in the inaugural Pegasus World Cup at Gulfstream Park on January 28. The three-year-old was confirmed for Sunday′s Grade 2 event after pleasing trainer Bob Baffert in a workout at Santa Anita on Tuesday morning.

Classic third Keen Ice, who beat American Pharoah in last year′s Travers Stakes, has been added to the list of likely Pegasus runners after owners Donegal Racing partnered with Jerry and Ronald Frankel, who have already paid $1 million for a guaranteed starting berth in the $12m event.

″It would take a better lawyer than me to argue that we′re likely to beat California Chrome or Arrogate,″ said Donegal president Jerry Crawford, speaking to the Blood-Horse.

″But this is a race that third place is definitely worth running for, and we′re not strangers to races where people say we don’t have a chance – we were in the Travers a year ago when we didn′t have a chance and we won.″

FIRST PUBLISHED 1:47PM, DEC 28 2016
It would take a better lawyer than me to argue that we′re likely to beat California Chrome or Arrogate