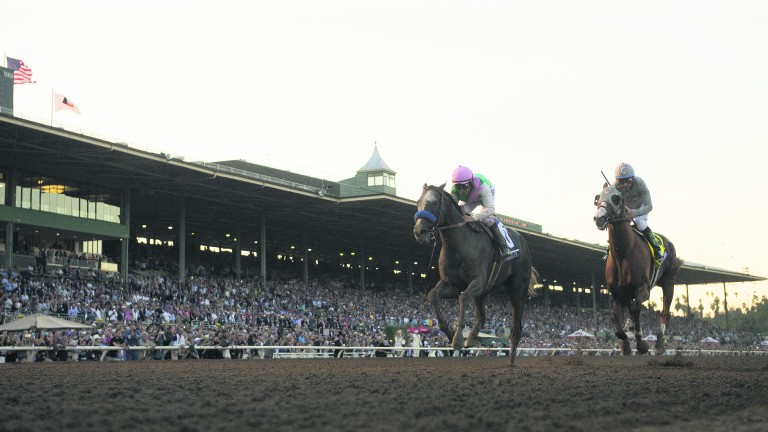 Arrogate (pink cap): three-year-old could warm up at Santa Anita for the world's richest race
Edward whitaker
1 of 1
By James Burn 3:21PM, DEC 23 2016

Breeders' Cup Classic winner Arrogate is in line for an appearance in next month's $12 million Pegasus World Cup after connections purchased a place in the world's richest race - and trainer Bob Baffert has warned his rivals there is more to come from the planet's best horse.

The three-year-old, who runs in the famous pink and green silks of Khalid Abdullah, burst onto the scene with a jaw-dropping performance in the Travers Stakes in August and backed that up when beating California Chrome at Santa Anita last month.

A rematch at Gulfstream Park on January 28 in the inaugural running of the Pegasus World Cup is now on the cards after Abdullah's Juddmonte operation purchased a place in the nine-furlong race from Coolmore.

Baffert, who saddled American Pharoah to win last year's US Triple Crown, could give Arrogate a prep at Santa Anita on January 1.

He told the Racing Post: "He looks good and he's training well. It's going to be a rematch with California Chrome and some other horses, so it should be exciting. If I run him at Santa Anita I won't have to do much in between.

"Arrogate's strengths are he gets stronger as the race goes on and he's got speed, but also tremendous stamina. To be able to run down California Chrome after he had an easy sort of lead takes some doing. He's a big, leggy horse who is very scopey and could go a mile and a half. He's 16.3hh and he's very athletic, light on his feet.

"He's a young horse who is learning how to run and is getting stronger; he's like a locomotive when he gets going."

Baffert, who would prefer an inside draw at Gulfstream Park, where "the turn comes up quick", said it was hard to compare Arrogate with American Pharoah.

"What American Pharoah did was pretty incredible," the trainer added.

"He kept bringing it every time, he shipped more and ran more and did it early as a two-year-old. They're totally different types, but I always knew Arrogate was a really good horse. He got beat on his first run, but was doing everything easily and then winning easily so we took him to the Travers and I knew he was good but I didn't know he was a superhorse.

"We know now - he's done it twice - and I can't believe I've had two superhorses back to back. It's pretty incredible."

The Pegasus World Cup is restricted to 12 horses, and 12 owners reserved a spot in the starting gate for $1m, though all can race, lease, share a starter, or sell their place in the gate.

FIRST PUBLISHED 3:21PM, DEC 23 2016
He looks good, and he's training well. It's going to be a rematch with California Chrome and some other horses, so it should be exciting