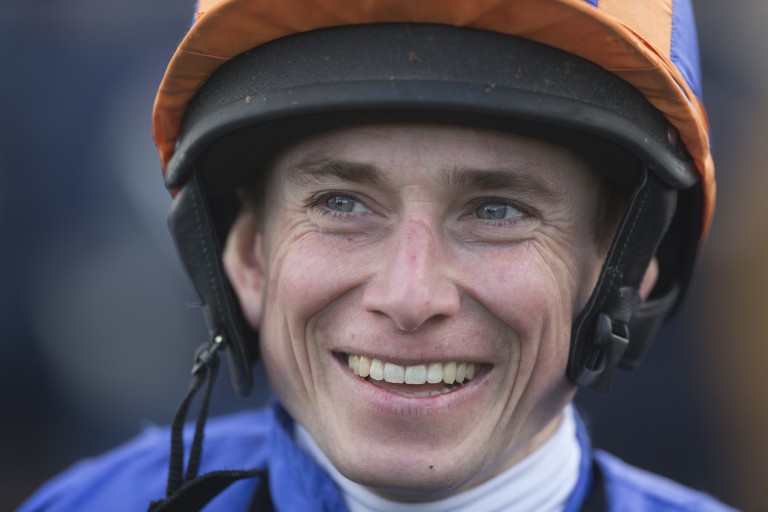 Ryan Moore, who is considered likely to miss the 2,000 Guineas next month to partner market leader Mendelssohn in the Kentucky Derby, rides the Todd Pletcher-trained Marconi in the Grade 2 Blue Grass Stakes (11.23pm BST, live on At The Races) at Keeneland on Saturday.

It is a day when some of America's leading three-year-olds also put their Classic credentials to the test at Aqueduct and Santa Anita.

Pletcher will be hoping that Moore – widely regarded as the world's best Flat jockey – can conjure an improved performance from Marconi, who could finish only fifth in the Fountain of Youth Stakes last month and is a top price of 66-1 for the Kentucky Derby.

Breeders' Cup Juvenile winner Good Magic (Chad Brown/ Jose Ortiz) was a beaten odds-on favourite in the Fountain of Youth but still finished two places ahead of Marconi at Gulfstream Park and is likely to be market leader once again in this 1m1f dirt contest.

His task will be made easier by the defection of Quip, the South Tampa Bay Derby winner, who will reportedly wait to run in the Arkansas Derby at Oaklawn Park next Saturday.

Betway make Moore 4-11 to ride at Churchill Downs on May 5 and 2-1 to ride at Newmarket, while the Aidan O'Brien-trained Mendelssohn is 5-1 favourite to become the first European winner of the Kentucky Derby.

But it could be all change in the Kentucky Derby market as leading contenders Justify (Bob Baffert/ Mike Smith) and Bolt D'Oro (Mick Ruis/ Javier Castellano) clash in the Grade 1 $1 million Santa Anita Derby (11.30pm BST, live on ATR), also over nine furlongs, in what has the look of a match – Coral go 4-5 Justify and 5-4 Bolt D'Oro, and 10-1 bar.

Bolt D'Oro, who finished third in the Breeders' Cup Juvenile last season, arrives on the back of a victory – albeit not one without controversy.

Bolt D'Oro narrowly lost out in a driving finish to the San Felipe Stakes at Santa Anita last month, but was awarded the race in the stewards' room after Mckinzie was deemed to have caused interference. The decision did not amuse Mckinzie's trainer Bob Baffert, who labelled the demotion "bulls**t".

A scheduled rematch had to be postponed after Mckinzie suffered a leg issue – which places his Kentucky Derby participation in doubt – but Baffert can still rely on Justify, who is two from two in minor events and has won those contests in fast times with an aggregate winning margin of 16 lengths.

The Grade 2 Wood Memorial (10.55pm BST, live on ATR) – which is New York's foremost Classic trial – takes place at Aqueduct over nine furlongs, and Enticed (Kiaran McLaughlin/ Junior Alvarado), a top price of 25-1 for the Kentucky Derby, looks likely to be sent off a warm order.

Enticed was bitterly disappointing behind subsequent Florida Derby winner Audible in the Holy Bull Stakes on his return in February but was a completely different proposition when routing his rivals in the Gotham Stakes last month.

Ryan Moore to ride Marconi for Todd Pletcher at Keeneland

Baffert fears setback could rule Mckinzie out of Kentucky Derby

Kentucky Oaks favourite Monomoy Girl (Brad Cox/ Florent Geroux) will put her Classic credentials to the test in the Ashland Stakes, where she will face six rivals headed by Eskimo Kisses (Kenny McPeek/ Corey Lanerie) in a race that has the look of a match.

Monomoy Girl, who has been beaten just once in five starts, sets the form standard after justifying odds-on favouritism in the Rachel Alexandra Stakes last time. Eskimo Kisses arrives on the back of a close-up second in the Fair Grounds Oaks.

Midnight Bisou (Bill Spawr/ Mike Smith), a top price of 10-1 for the Kentucky Oaks, looks sure to be sent off a short price to bag a first Grade 1 success in the Santa Anita Oaks following impressive victories in the Grade 2 Santa Ynez Stakes and the Grade 3 Santa Ysabel Stakes.

The main threat to Midnight Bisou could come from Spectator (Philip D'Amato/ Javier Castellano), who created a fantastic impression when winning the Grade 2 Sorrento Stakes last season but could finish only third when stepped up to the highest level in the Del Mar Debutante Stakes.

A field of 13 are set to go to post in a competitive renewal of the Madison Stakes, in which Miss Sunset (Jeff Bonde/ Julien Leparoux) is likely to be among the market leaders. Miss Sunset, whose standout performance came in winning the Grade 2 Raven Run Stakes at Keeneland last October, arrives on the back of an impressive seven-length success in the Irish O'Brien Stakes at Santa Anita last month.

Awesome Slew (Mark Casse/ John Velazquez), who was last seen finishing third in the Breeders' Cup Dirt Mile, makes his seasonal reappearance in the valuable Carter Handicap. Awesome Slew finished runner-up to some of America's leading sprinters last season, including the likes of Drefong and Mind Your Biscuits, but has yet to strike at Grade 1 level. Among his rivals is the unexposed Army Mule (Todd Pletcher/ Joe Bravo), who has won both starts by an aggregate of 16 lengths and clocked a fast time when successful at Gulfstream in January.