Classic action, Royal Ascot clues, a sprint sensation and so much more 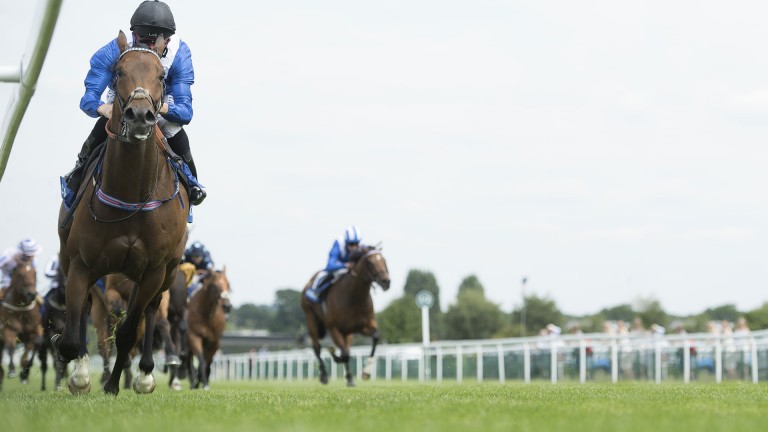 This is not a Saturday for shopping, taking the kids to the playground or tossing burgers on the barbecue. It was for gripping days like this that armchairs were upholstered. Check the batteries in your remote and keep flicking.

That is, of course, if you cannot attend one of the eight meetings across three countries which provide punters with 57 different races to get stuck into. There is racing near you, no matter where you are.

If the Curragh is your local track then you will get a sneak peek of the future. The early stages of the multi-million-euro investment are good – very good – and the course's chief executive Derek McGrath has promised racegoers a thoroughly enjoyable experience at the first Irish Classic of the season.

Saxon Warrior is bypassing the Tattersalls Irish 2,000 Guineas for a crack at the coveted Triple Crown, which takes him to Epsom for the Investec Derby next, but the best of the rest rock up at the Curragh.

If Elarqam were human, his mother would be Paula Radcliffe and his father would be Usain Bolt. He is bred to be brilliant, being by Frankel and out of Attraction, and you got the sense his Newmarket fourth to Saxon Warrior could be the start of a special season. The owner's assistant racing manager Richard Hills says he should win, and punters agree.

Ryan Moore has thrown us a curveball by picking US Navy Flag over Gustav Klimt. Who are we to doubt the maestro?

We've got the brilliant Battaash in action at Haydock. Not for long, though. It took Priceless 57.55sec to win the Temple Stakes last year and the world's fastest horse is rated 16lb quicker. Savour every last second.

There are Commonwealth Cup clues in the Sandy Lane, also at Haydock, where James Garfield and Invincible Army trade blows, while Goodwood stages two Listed events and York plays host to the first running of the Group 3 Bronte Cup Fillies' Stakes and some ferociously competitive handicaps.

Pace yourself. Don't burst from the stalls and set too brisk a tempo over the first few furlongs. There is a long day ahead and, remember, there is the small matter of a Champions League Final in Kiev later in the evening featuring a lively Liverpool that make us all feel knackered just watching them.

This is a day to test your physical and mental fitness. It is a Saturday sent from heaven just for sporting fans, especially racing ones. Enjoy one and all.

The need for speed

Get all your blinking out of the way by 4pm as you don't want your eyelids to get in the way of watching Battaash, the world's highest-rated five-furlong sprinter, in the Armstrong Aggregates Temple Stakes.

The awesome Abbaye winner makes his eagerly awaited return to action in the Temple Stakes at Haydock, boasting a rating of 123 following his scorching effort at Chantilly on Arc day last October.

The flying four-year-old is as short as 9-4 with BoyleSports to win the King's Stand Stakes at Royal Ascot. 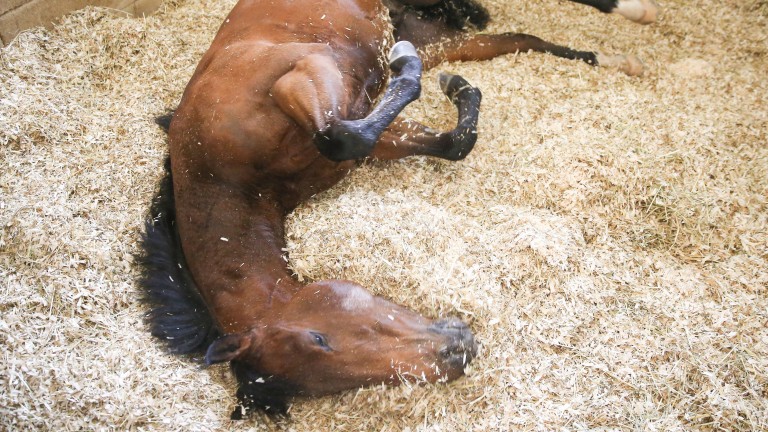 Search for a star

If you're a fan of the future, keep a close eye on the
Marble Hill Stakes (3.00) at the Curragh.

The Listed sprint for juveniles was the scene for a comfortable Caravaggio victory on the way to Coventry Stakes glory in 2016, and his trainer Aidan O'Brien throws three last-time-out winners at the target this time in his attempt to land the race for a sixth time in 11 years.

Van Beethoven, who put in a power-packed performance in a 6f Naas maiden this month, is the choice of Ryan Moore.

Land Force, who already has a course-and-distance success to his name, and Fairyland, a rare first-time-out juvenile winner from Ballydoyle, completes the O'Brien challenge.

It’s a massive day for Liverpool and their fans, whose number include a fair few from the weighing room. What do they – and one easy-to-spot Evertonian! – make of their chances against Real Madrid in the Champions League Final?

Franny Norton
I'm quite hopeful. The way I see it, it's the Liverpool of the new v the Real Madrid of the old. Let's not kid ourselves, it's going to be hard, but it'll be a great game. The teams are set up for a cracker and it'll be brilliant to watch. I think it'll take at least three goals to win it.

William Buick
I'll be staying in Ireland so hopefully the hotel will have the right channel, otherwise I'll have to stream it on the iPad, but I'm really looking forward to it. It should be a huge game, Liverpool have the momentum but Real Madrid are never easy. It'll be a good game, the teams play different styles and that should make it exciting. I'll say 3-1 to Liverpool.

PJ McDonald
I'm in the last at Haydock so it'll be trap six, get home as quick as I can. I'm nervous, excited, it could be a hell of a game – 6-0 either way wouldn't surprise me. I just hope we go out and attack the game. It'll be great to watch and I think it'll be 3-2 either way. I'll certainly have no bother doing light the next day as they'll probably make me sweat.

Paul Hanagan
I'm nervous already. It's such a massive game and I'll be dashing back from Haydock to watch it. I just hope they go and attack because they've been such a pleasure to watch. To do what we did to a team like Man City takes some doing. There'll be quite a few goals, I just hope we're on the right side of it.

Martin Dwyer
I'm riding at Salisbury, but hopefully I'll get in the car after and turn the radio on to hear they're getting battered. Real Madrid are the type of team that can play badly and still win, so Liverpool are up against it – and I think if they adjust their tactics to try to stop Ronaldo they'll definitely get beaten. It should be an open game and I just hope Real Madrid are too good. If not, I'll have to turn my phone off for at least a week.

The programme for stayers has received a welcome boost over the past couple of years and York stages the first edition of the Al Basti Equiworld Dubai Bronte Cup.

This £90,000 1m6f Group 3, which is live on ITV4 at 3.05, is part of a move designed to incentivise owners and trainers to keep fillies and mares racing a little longer before sending them to the breeding shed.

The Francis Graffard-trained Do Re Mi Fa Sol could be the poster girl for the initiative, since she is already in foal to Le Havre but makes the journey from Chantilly to take in the race en route to Colin and Melba Bryce’s Laundry Cottage Stud.

Graffard said: "It’s a really good slot for her. We had the option of the Pinnacle Stakes at Haydock, which we won with Bateel last year, but this longer distance is perfect for her."

Do Re Mi Fa Sol already has the distinction of having won the first race at the recently reopened Longchamp, although day-one teething problems with the escalators conspired to prevent her owners reaching the winner’s enclosure in time for the photos.

Let’s hope everything clicks on the Knavesmire.

It’s a different ball game to the wide-open spaces of Cheltenham but Triumph Hurdle sixth Redicean returns to action over 1m5½f at Chester in the Trust Tech Handicap (3.30).

Redicean reached a career-high Racing Post Rating of 89 on the Flat when winning on his final start for David O’Meara at Redcar last October, after which he was bought to go jumping with Alan King.

The highlight of last winter came when he landed the Grade 2 Adonis Hurdle in good style at Kempton and, while most of his 11 rivals have a more recent run to their name, Redicean is drawn well in stall four and won’t want for assistance from the saddle as former jump jockey Dougie Costello takes the ride. 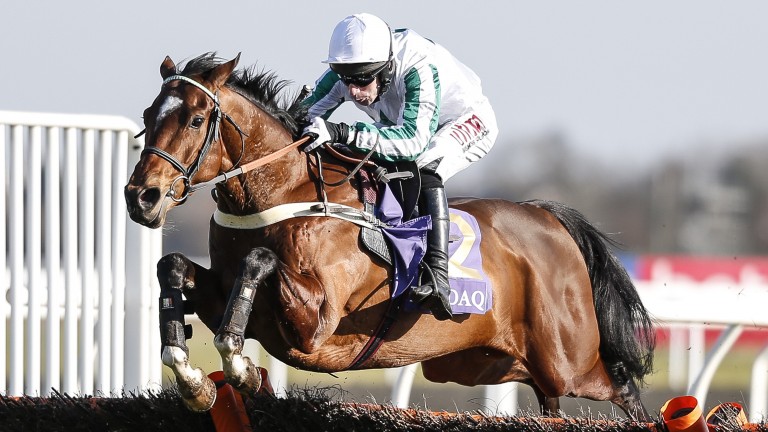 Battaash is sure to be a warm order for the Temple Stakes at Haydock but he has a Group 1 penalty to overcome and you have to trawl all the way back to Airwave in 2003 to find the last winner of the Group 2 to defy such a disadvantage.

FIRST PUBLISHED 5:04PM, MAY 25 2018
If Elarqam were human, his mother would be Paula Radcliffe and his father would be Usain Bolt