Classic absentee Wuheida bidding to make up for lost time 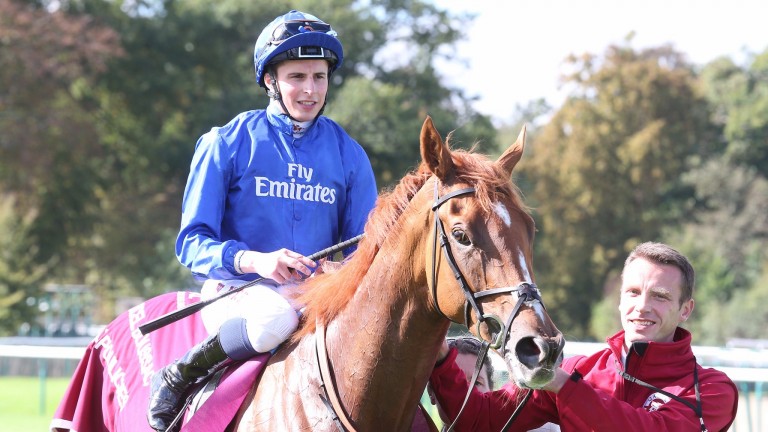 3.35 Newmarket
Godolphin built their 2017 Classic aspirations around the unbeaten filly Wuheida only for them to be dashed when she suffered a training setback.

After another campaign having passed without a victory in any of the Classics run to date, the filly makes a timely return in Group 1 company.

Victory over Roly Poly, second to dual 1,000 Guineas winner Winter in her last two outings, would inform Wuheida's connections how realistic their Classic dreams had been.

Wuheida, who made a winning debut on the July course, ended last year as one of Europe's top juveniles after victory in the Group 1 Prix Marcel Boussac at Chantilly on Arc day.

Trainer Charlie Appleby said: "I'm delighted to have Wuheida back on track after she suffered her setback in April and she's been pleasing us with her preparation.

"We're coming up against some battle-hardened opposition, but if she's still the same filly she was in the spring – which is what she's been showing us – she should be highly competitive.

"Our original aim was to run her in the 1,000 Guineas and then step her up in distance. This race fits a similar profile – we want her to go out, get a run under her belt and work her way into the rest of the season, with the idea that stepping up in trip will suit.”

Wuheida is one of two Godolphin challengers, with Saeed Bin Suroor saddling Arabian Hope who has won three in a row, the latest at Listed level, under Josephine Gordon.

Her trainer said: "This is a big step up for Arabian Hope but I've been happy with her and I'm looking for another good result.”

Cons Lacks match practice, having not run since October

Aidan O'Brien trains the season's outstanding three-year-old filly in Winter and could have the second-best on his hands too if Roly Poly can progress from bridesmaid to bride.

The filly's last victory was on this day a year ago when she claimed the Duchess of Cambridge Stakes, but she has nevertheless become admirably consistent, finishing second in three Group 1 races.

During an already busy campaign she has finished second to Winter in the Irish 1,000 Guineas and filled the same spot in the Coronation Stakes, cutting the winning margin to two and a quarter lengths at Royal Ascot.

She has taken a step forward in each of her four starts this year and stands out based on 2017 form.

O'Brien won the Falmouth for the first time last year when three-year-old Alice Springs ended a run of five victories for older fillies.

The trainer said: "She's a consistent filly and has run very well over a mile on her last two starts, finishing second in the Irish Guineas and the Coronation Stakes. We've been happy with her since Ascot and she seems in good form. She'll like the ground."

William Haggas hopes conditions will not to prove too quick for Sea Of Grace as she seeks to build on her Poule d'Essai des Pouliches second.

The filly, winner of last year's Group 3 Flame Of Tara Stakes in the Sea The Stars colours of the Tsui family, joined Haggas from John Oxx this season.

She finished fifth on her seasonal comeback in the Nell Gwyn Stakes then took a step up when finishing a length and three-quarters behind Precieuse at Deauville. But Precieuse was unable to boost the form when last of seven in the Coronation Stakes at Ascot won by Winter.

The ground at Deauville was very soft, and Haggas fears conditions on the July Course – which are currently good – could prove too quick.

The trainer said: "She's a better filly with cut in the ground. The rain was vital to her running and we're still not out of the woods. I think the ground will be too quick to see her at her best but I'm very tempted to let her take her chance."

Pros Produced a career-best effort when second in France

Cons Ground key and Newmarket could be too quick without rain

Delectation tries to win the prize for Germany for the first time since 2001 as she returns to the country where she began her career.

The filly won the Group 3 Firth of Clyde Stakes at Ayr when trained by Bryan Smart and under Andreas Wohler she has added another Group 3 and finished fourth in the German 1,000 Guineas.

He said: "She's already twice a Group 3 winner and we don't have another suitable race except against colts and we want her to stay with the fillies.

"I know it'll be tough but last time she never really got into the race and at Deauville – she didn't handle the [very soft] ground. She's in great shape."

Greta G won a Group 1 in Argentina last year and was ninth on her first British start in the Duke of Cambridge Stakes.

Trainer John Gosden said: "She ran a nice first race for us at Ascot and deserves to take her chance in an open-looking race."

Opal Tiara was four places further back at the royal meeting and would be pulling off one of the bigger shocks if she can give Mick Channon his first win in the race since Music Show in 2010.