Clare Balding: 'I was in a complete mess - it was really close to the surface' 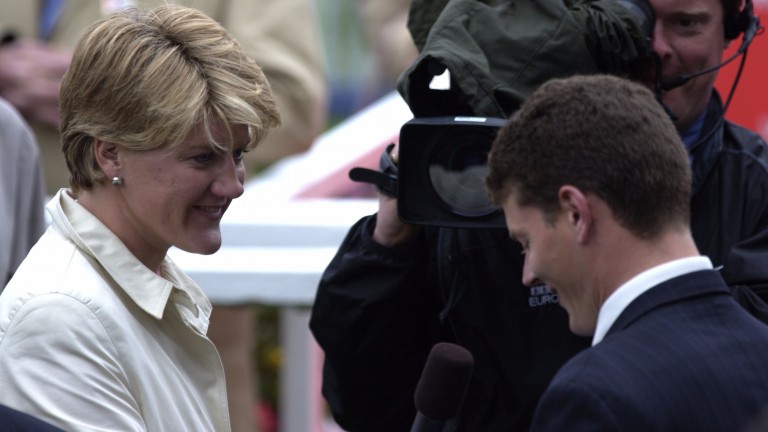 The 'speechless' interview: tears all round for the Balding family as Clare interviews brother Andrew after Casual Look's Oaks triumph
Edward Whitaker (racingpost.com/photos)
1 of 1
By Andrew Dietz UPDATED 9:37AM, MAR 5 2021

Multiple award-winning presenter Clare Balding has built her career on saying the right thing at the right time, but even she was lost for words when working for the BBC at Epsom on Oaks day in 2003.

Understandably so, given her brother Andrew had just won the Classic with Casual Look in his first season as a trainer – and at a track where father Ian had famously triumphed in the Derby with the legendary Mill Reef.

It was a momentous day for the Balding family and as much as Clare tried to keep her emotions in check, the occasion got the better of her. Balding's reaction struck a chord with many viewers and made for memorable television.

I remember watching Casual Look, whereas normally I'd watch all of the runners. I was keeping an eye on Aidan's filly [Yesterday] and saw her getting into trouble, while Casual Look had the most beautiful, uninterrupted run down the middle of the track.

I was standing next to Willie Carson and I started hitting him on the back. I got very excited and started thinking 'she's going to win this'. Sue Barker was presenting and I was down next to the winner's enclosure watching on a screen. I did turn round to watch it for real as she crossed the line.

I was thinking in all of Dad's years of training, he'd never won the Oaks and Andrew's done it in his first year of training. I was so proud of him. It was a stamp of approval and showed his competence. That was why I got so emotional.

I went to interview Andrew and just made a statement to him rather than ask him a question, to give him the opportunity to say whatever he wanted to say. He looked at me and said: 'Is that a question?'.

Then I thought I better grab Dad while I could. I said to him: 'Can you speak?'. He started crying and said 'No!'. That was it, I was in a complete mess. It was really close to the surface for me.

My immediate thought was that it was so unprofessional and why didn't I hold it together. I talked to Sir Peter O'Sullevan about it and he said it was fine, just don't do it again. Sometimes you can't help it. Sport is about many things, but essentially it's about how it makes people feel.

Clare was shaking, shouting and crying. While I was happy watching her get so excited, I was actually a bit stunned by it all and found it hard to take in.

She had a tight hold of my arm during the race and I got a few bruises. She was jumping up and down and whacking me on the back. Her brother had just started training, taking over from her father, and he had won the biggest race of the year for a filly.

You can imagine the enormity of it all. The woman who always managed to find the right words, couldn't get anything out of her mouth.

FIRST PUBLISHED 8:00AM, MAR 5 2021
You can imagine the enormity of it all. The woman who always managed to find the right words, couldn't get anything out of her mouth

USA, Hong Kong and Bahrain all possible destinations for globetrotting Bangkok 'He’s a talented individual' - high hopes for Balding's Harrow after first win 'I could have been dead quite easily - but I recovered and I'm back again' 'Some days I say I'm going to pack up - but training horses gives me a purpose' 'There's some screaming behind me' - what it's like to win the Galway Hurdle Celebrations all round as Good Birthday completes 131-1 treble for Jason Watson