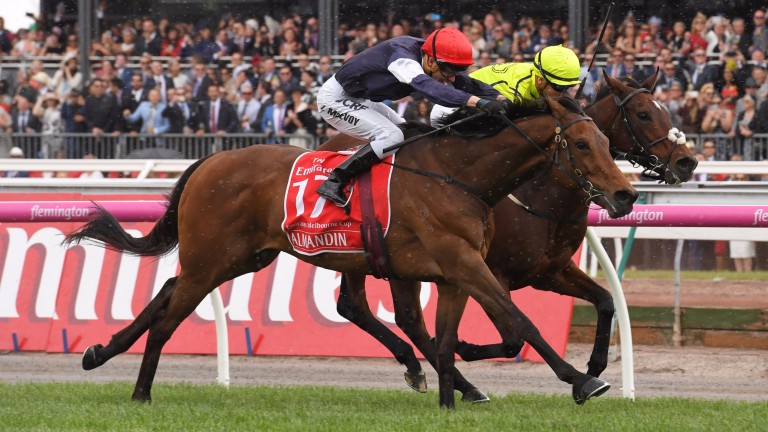 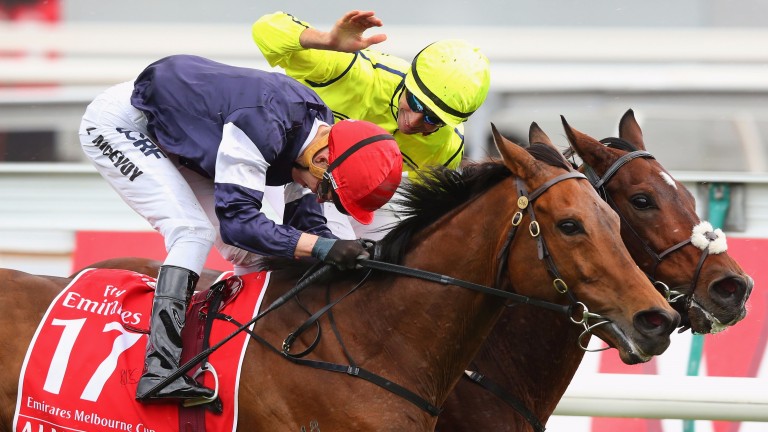 Heartbreak City (yellow) was narrowly denied by Almandin in a brilliant finish
Vince Caligiuri
1 of 2
By Mark Scully in Melbourne 12:43PM, NOV 1 2016

Heartbreak City was carried out on his shield as Almandin and jockey Kerrin McEvoy got the better of the Irish raider in a pulsating conclusion to the 156th Melbourne Cup.

The Ebor winner's charismatic owners have won plenty of fans in Melbourne and for a moment it looked as if the party was about to start in earnest as Heartbreak City hit the front with a furlong and a half to run.

Unfortunately for the Tony Martin-trained stayer, Almandin had been right with him all the way around Flemington and had just too much as he handed his owner and Melbourne native Lloyd Williams a record-breaking fifth victory in the storied race at the end of a titanic battle.

For connections of Heartbreak City, there was only pride in the achievement, with jockey Joao Moreira confident he had done all he could to try to overcome his awkward draw in stall 23 of 24.

"The horse gave me 120 per cent of himself, so I can't be disappointed," said the Hong Kong-based rider. "Obviously, it's not nice to lose like that but we have to keep looking forward. This horse will be competitive anywhere in the world they want to go.

"To look at him, you might not think he's that good but when he goes out on the track, he shows you how good he is. Unfortunately, we couldn't win today but I won't be going home upset.

Martin too had nothing but praise for the horse and his staff, saying Heartbreak City had simply been outdone by a better rival on the day.

"I'm so happy for all the owners, my family and all the crew that work for us back home," he said. "It was a wonderful performance, he ran full of heart but it's just a shame we couldn't quite get him across the line.

"I'd say we'll still have a lot of beers tonight."

That was a sentiment backed by co-owner Niall Reilly, who also suggested Heartbreak City's international adventure may not be over yet.

"I thought we were going to nick it and the plan we had for the race was exactly the way it was run," he said. "Joao placed him exactly how we wanted to run, he's a true professional. We were beaten by a better horse but I am so proud of our horse, so proud.

"The party is still on, it never ends. We travel wherever the horse goes and it's one big social thing for us. We're not here for the money, we're here for the big stage, the big parties and to have a good time.

"He might be a horse for Hong Kong but we'll just see how he does. Tony is a patient guy and the horse has to be right, there are no half measures. If you see us in Hong Kong, you'll know the horse will be pretty damn good."

For McEvoy, the win was a second in the Melbourne Cup following his success aboard Brew in 2000 and capped a fantastic spring that also saw him win the Geelong and Bendigo Cups, as well as the Crystal Mile at Moonee Valley.

The former UK-based rider is also preparing to become a father for the fourth time and admitted his second victory felt much different to his first, with the gap between the two wins a new record among multiple winning jockeys.

"Words can't describe it, I'm just ecstatic," he said. "To be able to win another one, I'm just over the moon. Lloyd had faith in me to get the job done and the horse had a dream run through.

"I was worried that Joao was kicking as well as me but my horse was just so game, he put his ears back and had another crack. He was so fresh and he traveled like a star the whole way, I was never off the bridle."

The race that ultimately stopped a nation... twice!

Few could have predicted the impact the 3.50 at Baden-Baden on June 1, 2014 would have but in hindsight, it was quite the contest.

McEvoy praised owner Williams for his race-planning, with Almandin having booked his place in the Melbourne Cup courtesy of a win in the Group 3 Bart Cummings Handicap on October 2 before being given a break.

For Williams, there was also pride in the win given his charge had to overcome a tendon injury that kept him off the track for more than two years before August.

"This win means a lot because he had a tendon injury and was almost broken down, so it's quite emotional," said the prolific owner, who was represented by a total of four runners in the race. "The boys have done a fantastic job of getting this horse back and we thought he had a real chance after the Bart Cummings.

FIRST PUBLISHED 7:53AM, NOV 1 2016
It was a wonderful performance, he ran full of heart but it's just a shame we couldn't quite get him across the line