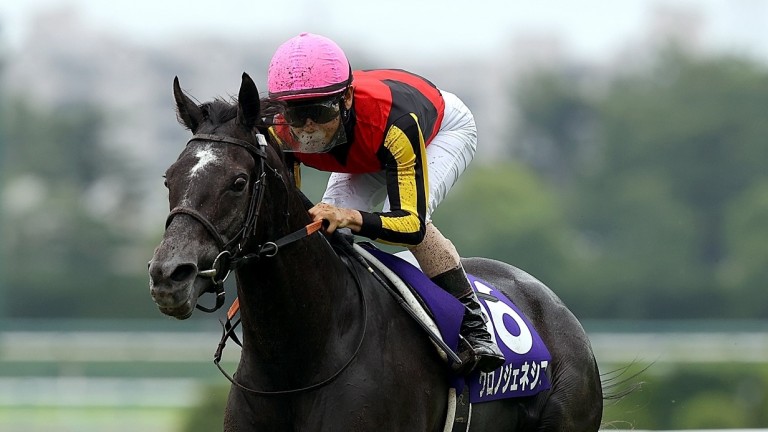 Chrono Genesis and Yuichi Kitamura run away with the Takarazuka Kinen
JRA
1 of 1
By Scott Burton 3:50PM, JUN 28 2020

Following the example of Lucky Lilac and Gran Alegria earlier this spring, Chrono Genesis handed out a Group 1 beating to the colts with a six-length demolition of her rivals in the Takarazuka Kinen at Hanshin.

That makes it three-two to fillies and mares in open Grade 1 company so far this year on Japanese turf and continues in the vein of last season's champion mare Lys Gracieux, as well as the mighty Almond Eye.

Chrono Genesis was was ridden with maximum confidence by Yuichi Kitamura, who sat no better than midfield and on the outside of runners for much of the mile-and-a-half trip.

Kitamura asked the daughter of Bago to take closer order entering the home turn and powered clear of her 17 rivals on the rain-softened turf.

"I didn't really have to urge her to go but she just went spontaneously," said Kitamura. "She was responding really well so I knew that she would stretch well in the lane. She has become a powerful filly and was in very good condition, she was really strong."

Chrono Genesis comprehensively reversed her defeat at the hands of Lucky Lilac in the Queen Elizabeth Cup back in November, and was a second Grade 1 winner of the season for trainer Takashi Saito, who also struck with Lauda Sion in the NHK Mile last month.

Lucky Lilac briefly led turning in but faded to sixth in the straight, while perennial front-runner Kiseki came home best of the rest under Yutaka Take, who elected not to force the issue from his wide draw and followed the winner throughout.

The Takarazuka Kinen is the midseason highlight over a mile and a half in Japan and has been used as a stepping stone to the Arc in the past.

However, Newmarket-based Deirdre was the sole entry made by any Japanese trainer when nominations closed earlier this month.

FIRST PUBLISHED 3:50PM, JUN 28 2020
She has become a powerful filly and was in very good condition, she was really strong