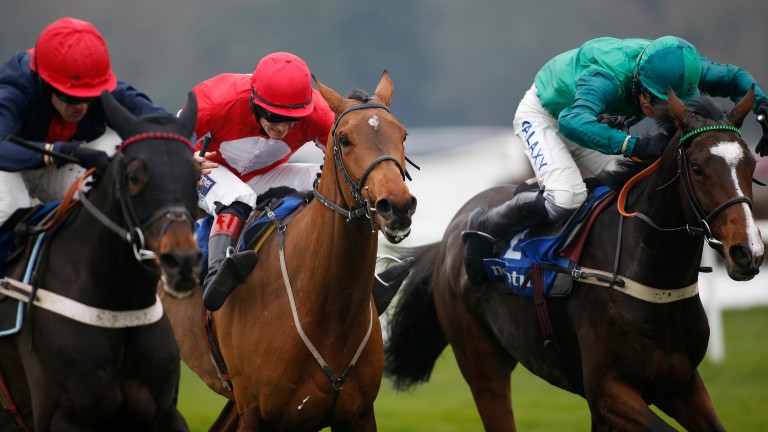 Messire Des Obeaux (right) came out on top from Ballyandy (centre) and the re-opposing Cultivator at Sandown
Alan Crowhurst
1 of 1
By Keith Melrose 7:03PM, DEC 30 2016

If you arrive late to the party, some people are going to forget that you turned up at all.

This is the position the Grade 1 Betfred 'Goals Galore' Challow Novices' Hurdle finds itself in year on year. Punters have gorged themselves on Kempton, Chepstow and Leopardstown over the last week and now look at the Challow as though it is the Christmas day cheeseboard.

It is unfortunate, as the race more or less lives up to its Grade 1 stature. No top-level novice hurdle is immune from the odd turkey on its roll of honour, but the Challow has been a stepping stone for winners such as Taquin Du Seuil, Reve De Sivola, Diamond Harry and Wichita Lineman in the last decade.

Its most famous winner is of course Gold Cup colossus Denman, but we must come to terms with the fact that it is coming up for 11 years since he beat The Cool Guy by 21 lengths in a re-scheduled Challow at Cheltenham on New Year's Day.

Most high-level novice hurdles at 2m4f and beyond are ultimately launchpads for future chasers and a glance at the Challow result from 12 months ago backs that up. Barters Hill beat Politologue and Label Des Obeaux in a race that would make a fine novice chase today.

Those three were the only runners last year and, besides its placement in the Christmas diet, small fields are usually the Challow's main drawback. That is not the case this season, as a healthy field of eight has been declared.

Heading them is Robin Roe, the horse who could make 2017 even better than 2016 for the Skeltons. He would have to go some: the year we will see out on Saturday has involved a first festival winner for Dan as a trainer and brought Olympic Gold to 58-year-old father Nick.

Robin Roe comes here off the back of a maiden hurdle win at Aintree, but the impression left there could hardly have been deeper. He scorched clear by 12 lengths, beating horses now rated 133 and 128 by the BHA.

Skelton nominated this race as the target in the winner's enclosure and no one batted an eyelid. Ten weeks on, the trainer has been true to his word and today is the day we find out if Robin Roe's position among the market leaders for the Neptune is based on more than favourable impressions.

Robin Roe's inexperience does not ring quite so loudly when it is considered that only three of his seven rivals have run in a Graded race before.

Messire Des Obeaux was seventh in March's Fred Winter and, as a second-season novice, toppled Ballyandy in the Winter Novices' Hurdle at Sandown earlier in the month.

"I expect him to run very well. I'd like to think he's one of our better novice hurdlers and I think he's got a big future," said trainer Alan King. "We like him a lot and he wouldn’t mind any rain as he goes on soft ground."

King has run five horses in the Challow before – the closest he has got being Junior, second to Diamond Harry in 2008. "My record in the Challow is not good," he conceded, "But we've got to keep trying and it seems the logical place to go. He'd get a penalty if he went to Cheltenham on Sunday and he doesn't know the stats!"

Messire Des Obeaux will face familiar opposition in Cultivator, third at Sandown. His trainer Nicky Henderson said: "He got into the race very quickly [at Sandown] and made mistakes at the last two. He looked sure to win going to the last.

"I was keen to take on the winner again but whether either will be good enough, I don't know."

Denman's trainer Paul Nicholls will this year be represented by Peak To Peak, who has been fast-tracked from maiden hurdles to a Grade 1 in the same manner as Robin Roe.

Nicholls pointed out that Peak To Peak's entry is no bold statement. "Funnily enough, I just haven't got that many staying novices this year," he said.

"Peak To Peak has only won a maiden hurdle at Fontwell and this is a big step up for him, but we like him and this is dipping his toe in the water to see where he is relative to Grade 1 novices," Nicholls added.

There is also interest in the choice of Baltazar D'Allier, who is the one from a handful Gordon Elliott entered to be declared.

"He won his maiden well at Naas and is a really nice horse for the future," said Elliott. "But this will be a big step up for him, so we'll have to see how things go."

In among all the top yards represented is Ami Desbois, who is just a second runner in a Grade 1 for trainer Graeme McPherson.

Like Messire Des Obeaux, Ami Desbois is a second-season novice. McPherson said: "Preserving his novice status had been the plan and he's grown up so much over the summer."

Ami Desbois has leapt forward in two runs this winter, finishing second in a Grade 2 at the International meeting last time. "He's been in great form since then," said McPherson. "He really went down fighting to Wholestone so I think he's worth his place in this field."

He added: "I would have wanted a drop more rain, to be honest, as over 2m4f on good to soft ground they might just take him off his feet. We'll be going out to make it a test."

FIRST PUBLISHED 6:00PM, DEC 30 2016
I expect him to run very well. I'd like to think he's one of our better novice hurdlers and I think he's got a big future