Robin Gibson interrogates the big sports websites over the festival 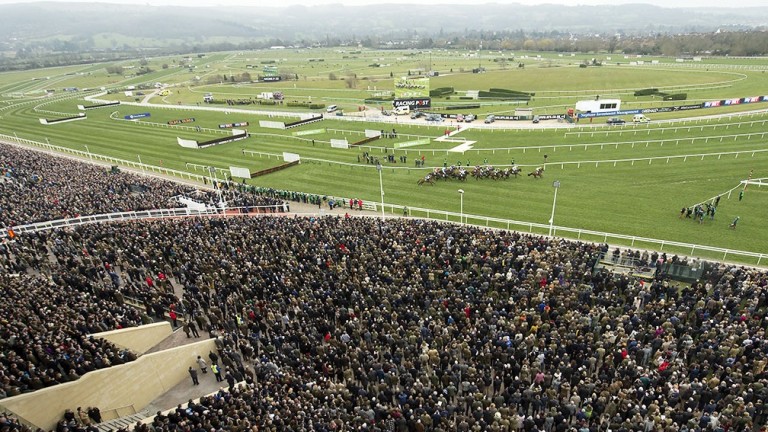 The Cheltenham Festival is the biggest event on the racing calendar, but barely registers on some online sports sites
Edward Whitaker / racingpost.com/photos
1 of 1
6:00PM, MAR 10 2018

You can waste a lot of time on the internet. You can look at the Cheltenham forecast for ages – Google, BBC, Met Office, Accuweather and my favourite, the Weather Channel app – and come away none the wiser.

They're all different, underlining the theory that anything beyond 24 hours is at least 50 per cent guesswork. It's the outside world, and it's unpredictable.

As the internet advances, many are quitting the outside world. Modern-shaped people just ask Alexa the weather and then watch through the window as delivery firms plough through it (the weather, not the window).

Still, some might be less keen on locked-in life since Alexa started laughing at them. It's a worry. If you happened to be telling a good joke you might just think it was laughing with you, but it's an uncertain line.

One sure thing is that the coming week is one when racing engages well with the outside world. It's the week, more than most, when the outside world switches from mildly suspicious host to welcome guest, carefully embraced.

It's interesting to see what the outside media thinks as the momentous meeting approaches. Not Gardeners' World or the Weatherfield Gazette, but the big sports hitters. Let's see. It's only Thursday, but so what? We're ready here with a few days to go.

ESPN. "The worldwide leader in sports." News: UK horseracing: "Formulator Angle: Delta Downs takes the spotlight." Further UK horseracing items: Gulfstream, the Kentucky Oaks, Tampa Bay and so on. A long stream of US racing and nothing else.
Festival awareness/information level: some kind of minus figure (out of five).

BBC Sport. They haven't shown the festival on the Beeb since 1994, but they still do it on 5 Live. Things might improve by the time you read this but the festival gets only one line (about Ruby Walsh) on the home page. And there's not much (four stories out of 15) on the racing page. Fail: 2. By the way, it's surprising how seldom Sir Peter O'Sullevan mentioned a jockey.

Eurosport. An endless home page, but if the Clangers, Jah or Morrissey ever came down to earth and started here they'd be hard pushed to find out Cheltenham existed. There is a racing section but it leads on Meydan, Lingfield and St Moritz. 'Festival Watch' registers down the side but the latest post is from February 20. Fail: 0.5.

MSN Sport UK. Further problems for the Clangers. Under 'More Sport' there's a link to a story about Ruby Walsh, but it's ninth fiddle to Tyson Fury talking about how he'll eat his rivals. Walsh should be more forceful. Fail: 0.25.

AOL UK Sport. Right out on a limb here – the real outside world. Does any sports fan use this site? Nothing to see. Fail: n/a.

The Daily Mash. In this relentless and harsh parody of the outside world, racing only just registers. There is a story about Cheltenham from last year though. "A man at Cheltenham knowledgeably discussing form and accumulators has already lost several hundred pounds, he has confirmed." Now that's a good intro. Fail: 1.

Back in the inside world, the Jockey Club has been embiggening its Race On app ("enhances your experience of a day at the races like no other"), hoping for a bit of seasonal outside-world engagement. In media, the JC is usually very good, so I downloaded the app.

But it's a bit disappointing. When you open it, you can select a track from a dropdown. Select Cheltenham (on March 8 – sorry, I can't be more up to date) and there is a pic of Irish folksters the Fureys. "The Fureys – Don't think twice!" it says. Okay. They will be playing on Thursday and Friday at the racecourse in the Guinness Village and the Centaur. "Not sure who they are?" it continues, uncertainly.

There's no info yet on the Racecard tab, and Plan Your Day kicks off with the dress code. Given "there is no dress code", it seems pointless to set new customers off worrying about their trousers when they're already fretting over the Fureys.

Anyway it's not all about Cheltenham (well, it is, but a bit of variety is nice). Our taxi driver last night was reminiscing about Michael Dickinson's 1-2-3-4-5 finish in the 1983 Gold Cup, then got on to the matter of racing in the movies. That's variety.

We couldn't recall the title of that comedy with Richard Dreyfuss. It was Let It Ride, but we had to look at the internet later to find out. The best racetrack film is The Killing (Stanley Kubrick's first major Hollywood effort, as it happens), though it's bit old-fashioned now.

It's always good to come across a familiar track in a film, old-fashioned or not, and racing fan Martin Smith has fired up a website about racing movies. Let It Ride's not in there (it's focused on films featuring British racecourses, although it also includes Ireland), but quite a few are.

The collection is not complete – a fair challenge, that – and Smith invites suggestions for inclusion, but as it stands it's neat and enjoyable, kicking off with Take A Chance (1937), "a jolly little caper with cads, stiffs and bounders". They don't make 'em like that any more. If only they did. Smith provides plenty of info, including how to get a hold of them, and reviews each film thoroughly.

Turns out they made 'em exactly like that frequently then, as Trouble Brewing (1939) with (ex-jockey) George Formby contains "exactly the same shots of Goodwood as in Take A Chance . . . the racing action has also been 'borrowed' from Take A Chance".

Still, there is variety. Did you know Yarmouth was in I've Gotta Horse (1960) with Billy Fury and Amanda Barrie? Perhaps you did. But that's the sort of thing I like on the internet. You can waste a lot of time on it.

Vision of the betting future is an endless virtual rat race

Simply the best? Contested case of Arrogate proves more complex than that