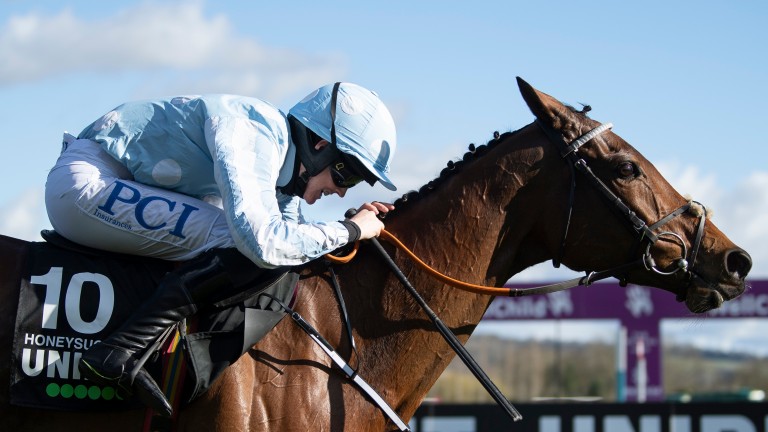 Henry de Bromhead described the unbeaten partnership of Honeysuckle and Rachael Blackmore as the "perfect storm" but the sight of the duo storming clear to land the Unibet Champion Hurdle looked more like a runaway tornado.

Rarely is a championship race won with such authority but from the moment Blackmore and Honeysuckle looped leaders Silver Streak and Aspire Tower rounding the home turn, the race was over as a contest.

Victory as the well supported 11-10 favourite was just the sort of uplifting performance the opening day of the festival was looking for after a troubled few weeks for the sport, with everything that makes thousands fall in love with horseracing encapsulated in a champion's performance that took just less than four minutes to reach an almighty crescendo as Honeysuckle ripped through the winning line.

There is nothing that draws fans in more than an unbeaten record and Honeysuckle was putting a ten-race winning sequence under rules on the line for a rider who only landed her first Grade 1 when Minella Indo won at the festival in 2019, but who has raced quicker than a bullet to the top of her profession since.

Indeed, Honeysuckle's breathtaking Champion Hurdle win made it 13 wins at the top level for her rider, who was in a state of shock after winning one of the four signature races of the week.

"To young people out there, male, female or whatever, if you want to do something go and do it because to me standing here right now, literally anything can happen."

She added: "You can't do it without getting on the right horses and I've been incredibly lucky in that sense and getting linked up with a yard like Henry de Bromhead's."

Honeysuckle was certainly the right horse on this day. Owned by Kenny Alexander, the man who took the parent company of Labdbrokes and Coral from a worth of £26 million to £4.5bn until he stepped down as chief executive midway through last year, Honeysuckle was simply in a different stratosphere and while others were making it hard for their riders, she was always in cruise control under Blackmore.

"I'm kind of speechless to be honest," added the rider. "I really can't believe we've just won the Champion Hurdle. Henry produces her everyday in that kind of form for me to just steer her around and it's unbelievable. She's so straightforward to ride and when you know you've an engine under you it's very easy to do things in a race

"I'm just so thankful to be a part of her but it's all about her. She's still unbeaten and that's incredible – and she's getting better the whole time." 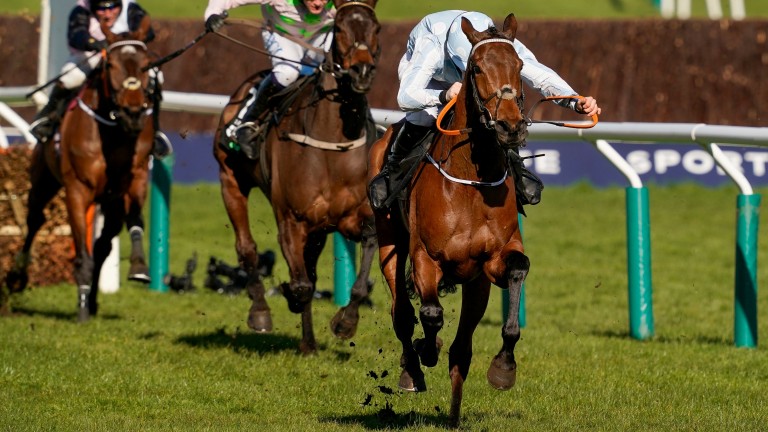 There was a sense of redemption for the winning trainer, who saddled favourite Sizing Europe in the 2008 Champion Hurdle, only for the horse who stamped De Bromhead's name on the training map to sustain an injury in the race having travelled strongly.

"When you first started training to think you'd win a Champion Hurdle, having watched it all my life, it's the stuff you dream about," said De Bromhead.

"Sizing Europe was a bit of a blow many years ago and I'm delighted for Kenny Alexander, who has been so supportive, and [Alexander's racing manager] Peter Molony."

Reliving the race and paying tribute to his leading ladies, De Bromhead said: "I was a bit more relaxed watching her today because she always seemed to be happy. After the second last Rachael gave her a nudge and she just seemed to be cantering.

"Goshen going off to the right for a while was a bit worrying but all in all it was one of the more relaxed races I've watched here.

"Rachael was amazing on her, she was as cool as a breeze. The combination of them is deadly – they're the perfect storm."

The race was not short of drama, with Abacadabras a faller at the third and the well-fancied Goshen proving difficult to steer, throwing away his chance by hanging to his right under Jamie Moore.

Yet even with a straight passage, he would have done exceptionally well to get close to Honeysuckle, who became the sixth mare and third in the last six years to win the Champion Hurdle. She is 3-1 favourite with Paddy Power to win the race again next season.

Punchestown could well be next for the winner according to De Bromhead, who along with Blackmore still has the little matter of A Plus Tard to look forward to in Friday's WellChild Cheltenham Gold Cup.

FIRST PUBLISHED 3:15PM, MAR 16 2021
To be in Cheltenham, riding the winner of a Champion Hurdle, it's so far removed from anything I ever thought could be possible