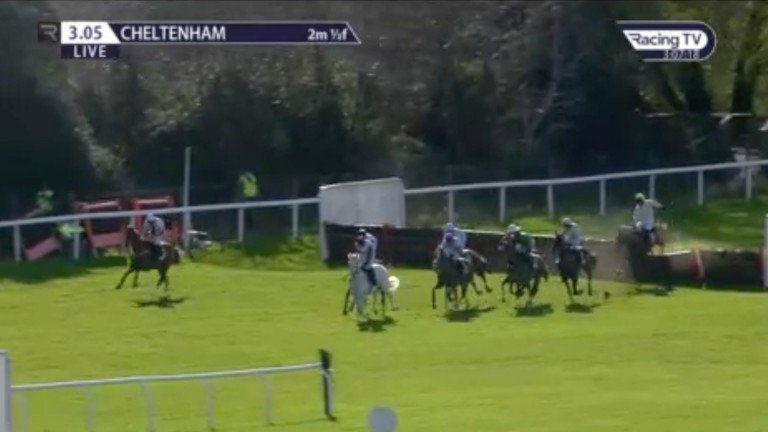 Goshen (far left) begins to hang badly to his right during the Champion Hurdle on Tuesday
1 of 1
By Chris Cook UPDATED 7:32PM, MAR 16 2021

Goshen has probably seen the last of Cheltenham, having thrown away his chance in Tuesday's Champion Hurdle by failing to settle and hanging badly to the right all the way down the back straight.

So unlucky in last year's Triumph Hurdle, when a late jumping aberration cost him certain victory, he seemed in trouble from an early stage this time and eventually finished a most disappointing eighth.

Trainer Gary Moore reported there was nothing evidently wrong with the five-year-old, who put in a much better performance at Wincanton just three weeks ago.

"I've been to see him and he seems fine," Moore reported. "He had a little cut in the side of his mouth which might explain a bit why he was going that way but that can't be the full story.

"I've never known him get warm before a race, but he got warm today. He hesitated about going into the paddock.

"It wasn't a fall last year exactly but he's run very disappointing here twice now, so I don't think he'll ever come back here again. It was too bad to be true. Okay, he might not have beaten the winner, but if he'd finished in a punch-up with them then I'd have been a lot happier than I am."

Moore reckons Goshen is unlikely to be seen at left-handed Aintree for the Grand National meeting next month. A trip to Punchestown, where the right-handed circuit might suit the horse better, appears a live possibility.

Sent off as the 11-2 third-favourite here, Goshen was over-racing in the opening stages and there would have been groans as the field passed the grandstands with a circuit to go, had any punters been present to utter them.

With Jamie Moore trying hard to assert control from the saddle, Goshen was alongside Silver Streak at the head of the race at that point. The horse who had been just about content to let someone else lead until the home straight at Wincanton was replaced by a much less biddable character.

Heading down the back straight, Goshen charged to the front. An awkward leap at the first hurdle there was the moment when even the most faithful of supporters would have had to admit to themselves that all was not, unfortunately, going smoothly.

As seen in the three images below, Goshen hangs alarmingly down the back straight during the Champion Hurdle, compromising his chances 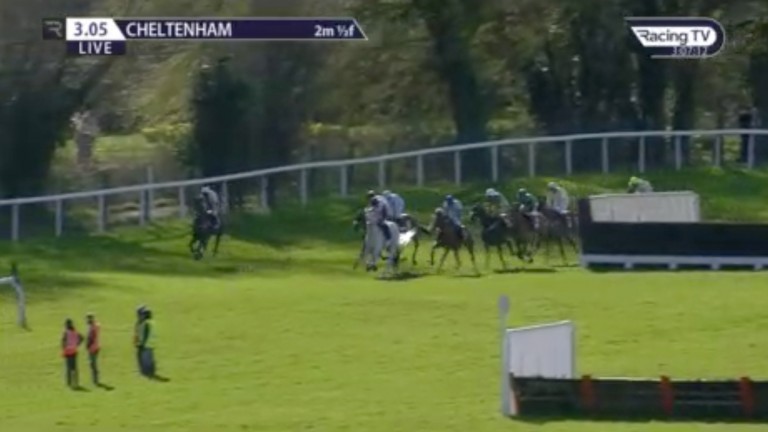 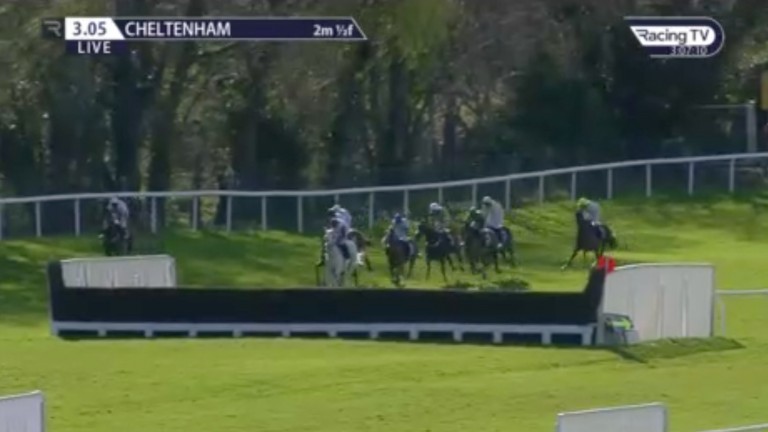 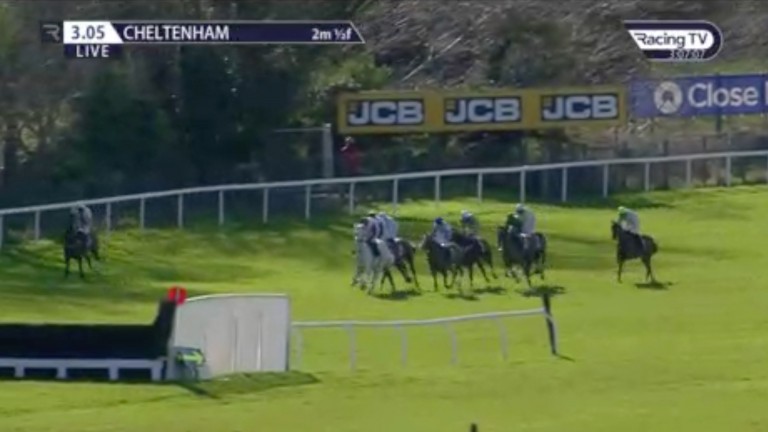 Soon after that, Goshen was hanging alarmingly out to the right, as if he was interested in disappearing through the rails and over the hill to Prestbury village. While his rivals remained in one compact, disciplined group, he was charting his own course around the outside rail and evidently giving his jockey a tough time.

Moore shifted his whole bodyweight to the left of the saddle in an apparent attempt to bring his mount back to their rivals and had some success as the field rounded the bend at the far point of the course but Goshen was now only fifth, having conceded masses of precious ground. For all that, he was still alongside the winner running down the hill but any lingering hopes were extinguished by the second-last flight, where he was fading to the back of the pack.

Given everything that had gone wrong, it was arguably to his credit that he kept going well enough to beat James Du Berlais, Willie Mullins's mystery runner from France. An examination of Goshen by the racecourse vet revealed no abnormalities.

FIRST PUBLISHED 5:30PM, MAR 16 2021
He's run very disappointing here twice now, so I don't think he'll ever come back here again. It was too bad to be true