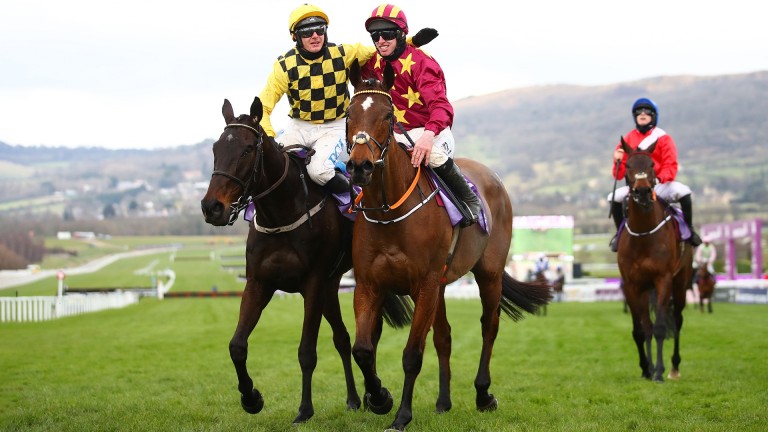 At the end of a glorious week during which the Irish delegation has been segregated in their own bubble and been a class apart on the track, it was probably inevitable the Gold Cup would illustrate that extraordinary gulf in such resounding fashion.

Minella Indo, returned at 9-1, led home stablemate A Plus Tard to crown a sensational four days in the Cotswolds for Henry de Bromhead and complete a historic hat-trick for the trainer in the Cheltenham Festival's showpiece events.

An epic spectacle that thoroughly lived up to its billing, the WellChild-sponsored Gold Cup was De Bromhead's sixth triumph of a stellar week, with Honeysuckle's brilliant Champion Hurdle success and Put The Kettle On's surprise Champion Chase victory setting up an unprecedented Holy Trinity.

No trainer had ever won the three traditional championship events at the festival. De Bromhead absolutely bossed the week.

The outgoing dual Gold Cup hero Al Boum Photo, sent off the 9-4 favourite, was carried out on his shield in third, and it was all of 24 lengths back to Native River, another former title-holder, in fourth. Daylight to the best of the British runners, or, in the lexicon of the day, a particularly antisocial distance.

The result of the 2021 Gold Cup, the sport's pinnacle event, epitomised the theme of this unique behind-closed-doors festival in emphatic terms. Ireland first, the rest nowhere.

"It's massive," admitted a delighted De Bromhead, whose overall festival tally now stands at 15. "I can't tell you what it means to win it – or just to win any of these races. I feel like I'm going to wake up and it will be Monday evening."

The County Waterford-based trainer added: "It's incredible. I've been coming here a lot of years now and there have been plenty of tough years and tough results, but also some great ones.

"To do this is a credit to everyone that's working with us, everyone at home and here, we couldn't do any of it without our clients supporting us. They give us the opportunity to buy these good horses, and I just feel extremely lucky."

In victory, Jack Kennedy became the youngest jockey to win the Gold Cup in modern times at just 21 years of age. Tim Hamey, who won on Koko in 1926 at 20 years of age, appears to be the only rider younger than him to have won the race.

Kennedy cried tears of joy as he pulled up, as this marked some sweet redemption for a young man who has been plagued by injury. He missed last season's festival after breaking his leg for a fourth time, while he has also suffered three fractured collarbones. 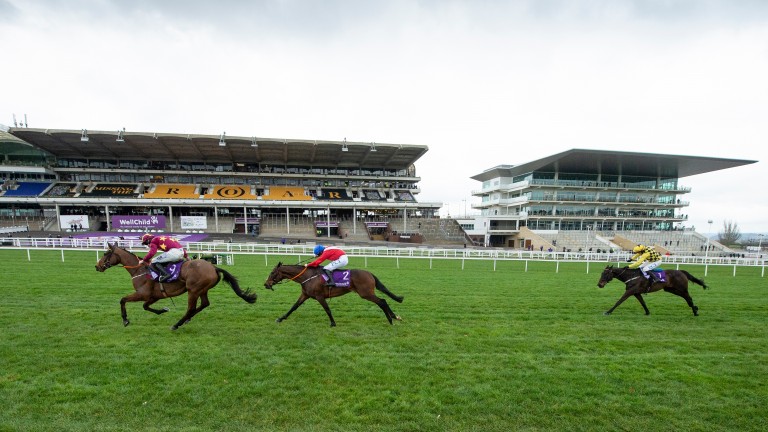 He is but a pup, yet he has the grit of an old dog, not to mention a world of talent. "It's definitely the best day of my life," he said. "I can't believe it's happening. I was emotional after it because it means the world to me."

Rachael Blackmore, who usually rides Minella Indo, had instead opted to ride the gallant runner-up A Plus Tard after the Barry Maloney-owned eight-year-old had disappointed in fourth behind Kemboy in the Irish Gold Cup last month, having fallen in his previous start in the Savills Chase.

"I thought my horse had as good a chance as any horse in the race," Kennedy added. "I was fairly confident going out, and the fact that Rachael picked A Plus Tard probably took some of the pressure off. He travelled and jumped great and there wasn't really any point where I wasn't happy."

It was a rare reversal this week for Blackmore, whose mount came there to challenge down the hill but could not get to grips with Minella Indo, who stormed home to win by a length and a quarter. She was subsequently hit with a two-day ban for her use of the whip from the home turn.

Nonetheless, Prestbury Park has been the 31-year-old's own personal fiefdom for the week. She finished the festival as leading rider, and was phlegmatic about choosing the wrong one when it was put to her that the incandescent smile she bore all week was still evident after the Gold Cup. 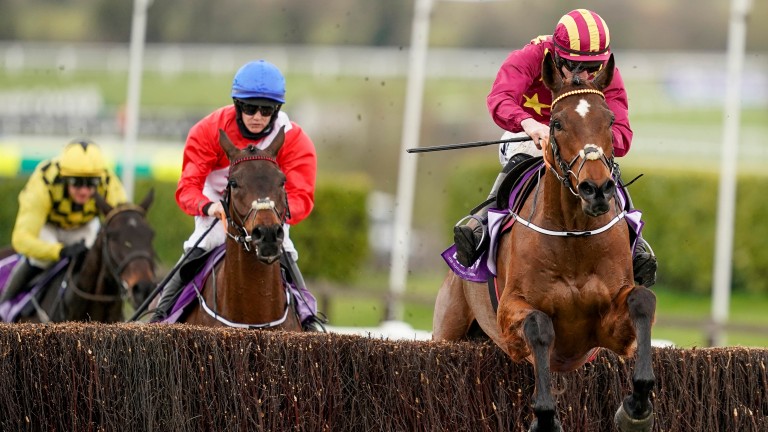 "I suppose my mask was up for a lot of it so you couldn't see my expression," she countered, "but I'm delighted for Henry and all his team. I can't be complaining too much."

Asked how tough a choice it had been, she responded: "Ah, I don't know. I made the wrong one – that's all I know."

His confidence restored after the clear round at Leopardstown, Minella Indo made no mistake here. Kennedy charted a wide passage on him early on, chasing an early pace set by Frodon. By the time they crossed the final fence in the back straight, he was poised in second, with Blackmore tracking him on A Plus Tard and Paul Townend in between the two on Al Boum Photo.

As they swung for home, Kennedy let Minella Indo slide into the lead, but A Plus Tard was on his shoulder, as Al Boum Photo chased a couple of lengths behind while Frodon backtracked.

It all seemed set fair for another grandstand finish for Blackmore. However, Minella Indo pinged the second-last, and A Plus Tard struggled to get on terms.

Kennedy's mount then flew the last as well and while A Plus Tard rallied, not even Blackmore's sorcery was enough to get him by his stablemate. Apparently she has her limits after all.

"This is what I have dreamed of since I was a child," Kennedy beamed afterwards. "I am just so grateful to Henry and Barry Maloney for giving me the opportunity to ride him. I can't thank them enough and I will owe them forever. This is what I live for. I just can't believe it."

Frodon eventually took fifth, while last year's star novice Champ blundered at the first fence and made a raft of mistakes. After continuing to labour, he was pulled up at the top of the hill before they had completed a circuit, while his Nicky Henderson-trained stablemate Santini also failed to fire and was pulled up after a circuit.

They, like so many other this week, had to watch on from afar as the Irish horses carried all before them. In a league of their own.

Members' Club: Jack Kennedy and Minella Indo are simply too good in an epic Gold Cup

2023 Cheltenham Festival guide: race-by-race schedule and how to watch it Willie Mullins: Facile Vega could easily step up in trip but I don't need to Supreme, Ballymore, Triumph and Albert Bartlett talking points and analysis Watch: episode 12 of Upping The Ante featuring 11-1 and 7-1 Cheltenham tips Who is entered for the Supreme, Ballymore, Triumph and Albert Bartlett? Davy Russell: 'I'm a grown man - I've no problem being jocked off at Cheltenham'