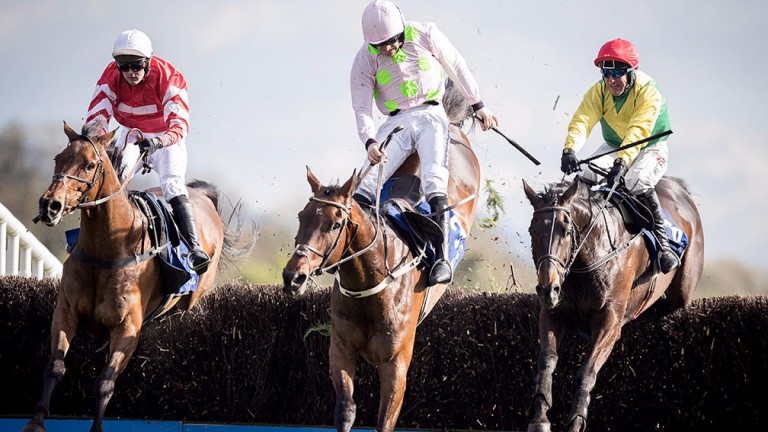 Now that's what you call a champion.

This was not the same Sizing John who gracefully galloped to Cheltenham Gold Cup glory. He forgot his flair, never found his flawless jumping and even lost a shoe, but he remembered how to battle and that steely determination and never-say-die attitude was sufficient to see off Djakadam and Coneygree in what was one of the most sensational showdowns Punchestown has ever hosted.

"I was never happy at any stage. He didn't feel like the same horse that I was on at Cheltenham," admitted jockey Robbie Power. "He didn't travel with the same fluency. He felt flat. At no stage was I comfortable. It is all credit to the horse, he has a heart the size of a lion. He was a bit slow at the second-last but he put his head down and battled."

And, boy did he battle. With Coneygree showing his old zest out in front and Djakadam soaring over every fence and sitting on the tail of the 2015 Cheltenham Gold Cup winner turning for home, Sizing John needed to dig deeper than he has ever dug before.

The three were almost in a line over the second-last but that line became skewed when Sizing John was slower than Djakadam. It was over to the bridesmaid to finally get hitched, but a stumble on the way to the altar proved costly. The two-time Cheltenham Gold Cup runner-up, who had finished second in the last two runnings of this race as well, hit the top of the last and landed awkwardly but was still in front halfway up the run-in. 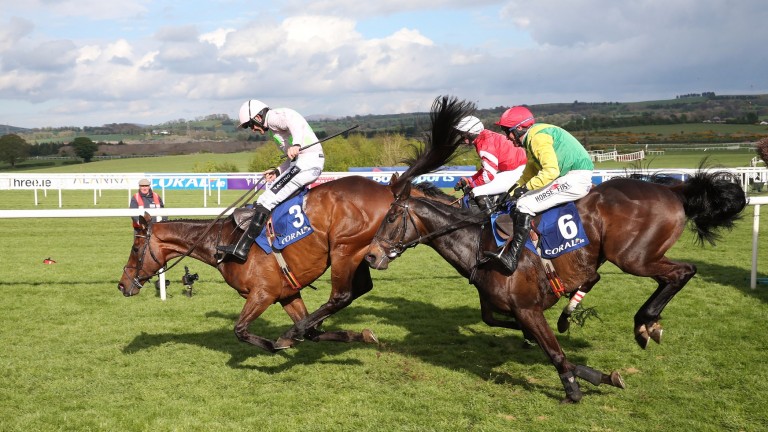 But champions don't know when they're beaten and Sizing John got up in the final few strides to become the first horse to win the Irish, Cheltenham and Punchestown Gold Cups in the same season.

"He never was travelling like he was in Cheltenham and it was probably one race too many. It was his fifth race since Christmas and it probably just told. Everything was going against him but he put his head down and battled. He's shown sheer guts. Pure guts got him there," said a smiling and visibly relieved trainer Jessica Harrington.

She added: "Coneygree and Djakadam made him go in a serious way. They went some gallop. He's also pulled off a front shoe so he had lots of excuses. Robbie gave him a great ride and is riding out of his skin. He sees the strides at the fences, he has great faith in the horse and he instills confidence into the horse."

You need two to tango and Djakadam ensured this was the most breathtaking dance. Willie Mullins still managed to find a smile from somewhere and stressed that his warrior had no excuses.

"His jumping was fantastic and he looked like he might get back up near the line. We can't complain. He's run a great race," Mullins said.

British raider Coneygree, who was making his first appearance since the Betfair Chase in November following a minor stress fracture, lost little in defeat and was a length and a half back in third.

Proud trainer Mark Bradstock said: "He's a dude. Let's hope he's sound tomorrow. He pecked on landing at the second-last which you don't need after a long time off and I'm delighted."

Jockey Nico de Boinville was thrilled with Coneygree too and believes he will be back to battle at the top level once again next season.

"He raced like a horse that still wants to do it. He can still mix it at Grade 1 level and that's all we needed to know," De Boinville said.

Sizing John was left unchanged at 5-1 with Paddy Power for the 2018 Cheltenham Gold Cup, while the same firm cut Djakadam into 10-1 from 16-1 for the King George later this year. Ladbrokes cut Coneygree into 16-1 for next season's Gold Cup following his gallant front-running display.

FIRST PUBLISHED 5:48PM, APR 26 2017
Everything was going against him but he put his head down and battled