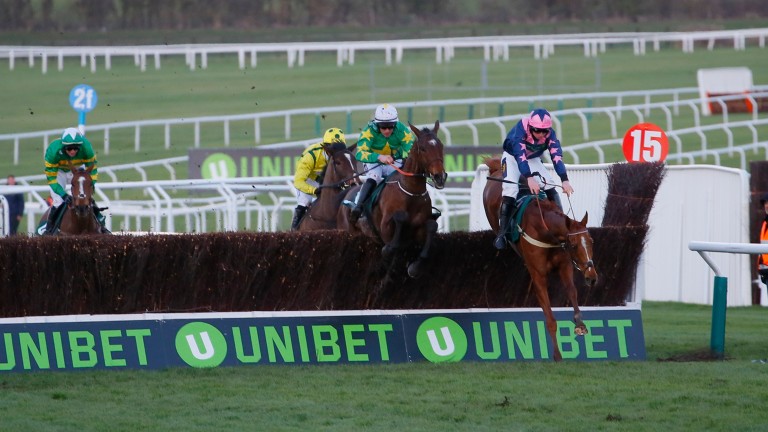 Le Breuil (Jamie Codd, purple) survives this blunder to lead home three other finishers in the NH Novices' Chase for amateur riders at Cheltenham on Tuesday
Mark Cranham
1 of 1
By Tony O'Hehir UPDATED 9:57AM, MAR 13 2019

The future of the National Hunt Chase in its present format for amateur jockeys at the festival could be in the balance after three riders were hit with suspensions totalling 37 days on equine welfare grounds.

The 3m7½f novice chase, run as the last of seven races on rain-softened ground on Tuesday, ended with four finishers from a field of 18. There were eight fallers, one unseated, and five pulled up in attritional conditions.

Declan Lavery, who finished third on Jerrysback, Rob James, who fell at the last on Just Your Type, and Noel McParlan, who fell two out on Mulcahys Hill, were all found by the BHA stewards to have continued in the race "when it appeared contrary to the horse's welfare".

James ended up with a suspension of 19 days, seven for using his whip when getting no response from before the final bend and another 12 for continuing when it appeared to be contrary to the horse’s welfare.

Damien Skehan, who finished fourth on Clondaw Cian, had left the course before the stewards could interview him over his riding.

The BHA reacted strongly to the bans, issuing a statement which appeared to throw into doubt the shape of future participation of amateur riders at the festival.

It read: "While we will carry out our full wash-up after the Festival has been completed, it is fair to say that we are extremely disappointed by the events in the National Hunt Chase.

More ominously for amateur riders, the BHA referred to last year's Cheltenham review after the death of six horses at the 2018 festival.

It went on: "The Cheltenham Review was clear that 'amateur riders should be aware that they are subject to particular public scrutiny and that amateur participation in its current form at future Festivals will be under material threat should further incidents occur'."

Lavery, whose mount Jerrysback was beaten 47 and a half lengths, was found to have had continued when it appeared to be contrary to his mount's welfare after tired jumping errors at the final two fences. He was banned for ten days.

The Cheltenham stewards found McParlan, rider of Mulcahys Hill, who fell two out, guilty of the same offence, although the racecourse vet stated that a post-race examination failed to reveal any abnormalities.

Skehan, beaten nearly 50 lengths on fourth-placed Clondaw Cian, faces an inquiry into the same horse-welfare breaches at a later date.

FIRST PUBLISHED 9:25PM, MAR 12 2019
It is fair to say that we are extremely disappointed by the events in the National Hunt Chase