Injured Penhill ruled out of defence of Stayers' Hurdle crown 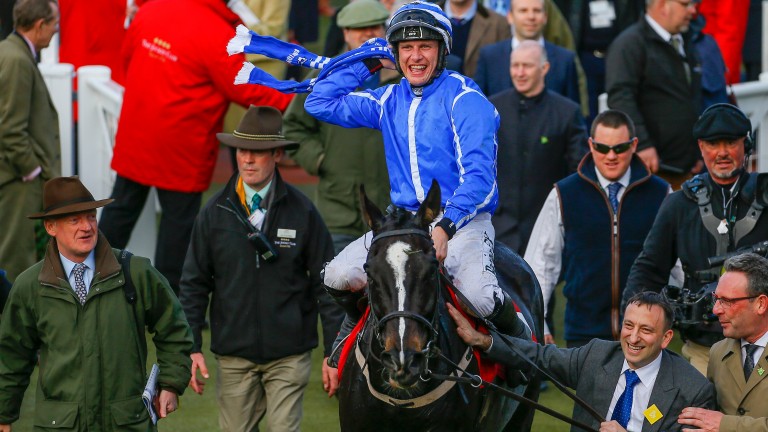 Penhill and Paul Townend are led back in after their Stayers' Hurdle win last year
Mark Cranham
1 of 1
By Tony O'Hehir UPDATED 6:48PM, FEB 27 2019

Paisley Park on Wednesday hardened into a top-priced 2-1 favourite for the Sun Racing Stayers' Hurdle after last year’s winner Penhill was ruled out through injury.

Penhill was being primed to win at the Cheltenham Festival for the third straight year by trainer Willie Mullins but was found to be ‘very sore’ after a piece of work at the Curragh.

It represents a significant loss for a Mullins team without as many outstanding festival contenders as in recent years.

Penhill had been a top-priced 6-1 to win the Grade 1 for the second year in a row on his seasonal debut.

Mullins said on Wednesday: "Unfortunately Penhill won't be going to Cheltenham. We brought him to work at the Curragh yesterday and he was very sore this morning.

"I've spoken to his owner [Tony Bloom] and as we wouldn't have time to prepare him for the festival we've had to pull the plug. It's too soon to say whether he might run before the end of the season."

The eight-year-old, who landed the Albert Bartlett Novices’ Hurdle in 2017, has not run since finishing second to Faugheen in the Ladbrokes Champion Stayers Hurdle at the Punchestown festival in April.

Clear market leader Paisley Park has emerged as one of the bankers of the meeting in recent times and is unbeaten in four starts this season, improving with every run.

The seven-year-old secured his first Grade 1 victory in the Long Walk Hurdle at Ascot and most recently defeated West Approach by 12 lengths in the Cleeve Hurdle at Cheltenham.

Responding to news of Penhill’s absence, trainer Emma Lavelle said: “All we can focus on is getting Paisley Park to Cheltenham in perfect order. Everything has been lovely so far with our lad.

“The fact the defending champion will not be there can only be a positive for us, but there are plenty of others to give us a proper race.”

Among them could be last year’s Ballymore Novices’ Hurdle winner Samcro, a general 5-1 chance vying with Faugheen for second-favouritism in the market.

Penhill is the second high-profile festival absentee this week after Racing Post Arkle favourite Le Richebourg was on Monday also ruled out with an injury.

FIRST PUBLISHED 3:27PM, FEB 27 2019
Unfortunately Penhill won't be going to Cheltenham. We brought him to work at the Curragh yesterday and he was very sore this morning

'I've fulfilled all my dreams' - Barry Geraghty says the time was right to go Henderson, Mullins, Nicholls, Skelton and more on their top summer jumpers 'I think he'll run a big race': analysis and quotes for the feature at Killarney